Day 3 of competition at the 2022 Mountain Bike World Championships concluded on Friday evening in Les Gets, France, with the crowd-pleasing XCC. French fans had even more reason to be pleased, with their own Pauline Ferrand Prevot winning the women's title, while Sam Gaze of New Zealand took the men's.

Laurie Arseneault was Canada's top finisher, 14th in the women's race, while Sean Fincham came from well back on the starting grid to finish 17th in the men's race.

Only in its second year as a rainbow jersey event, the Short Track runs for 20 minutes of extreme effort on a cross country circuit. The Les Gets circuit featured off-camber switchback climbs and multiple rock gardens to test the riders. 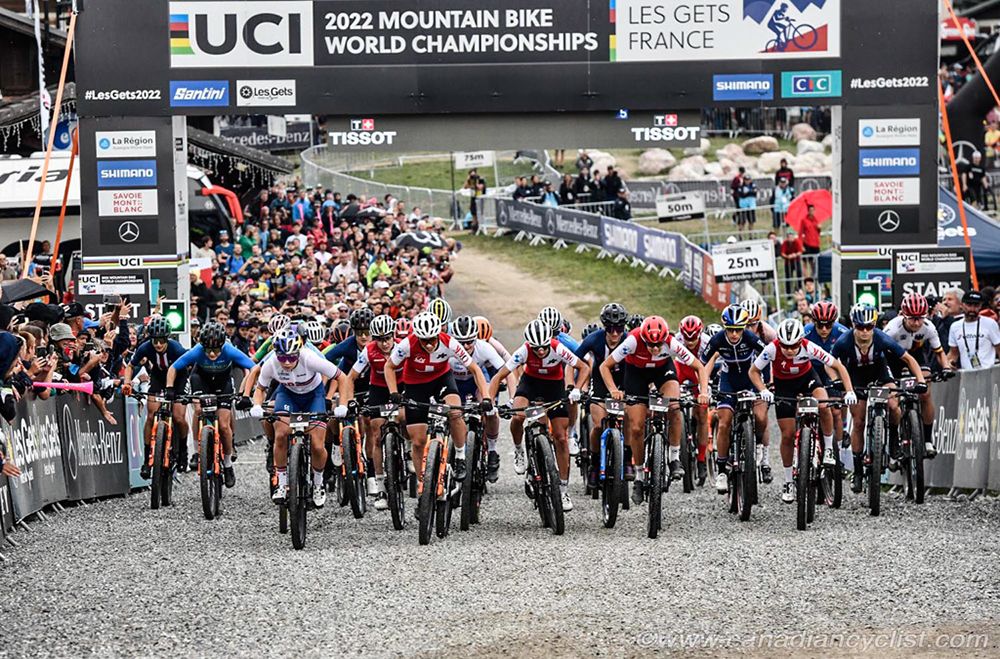 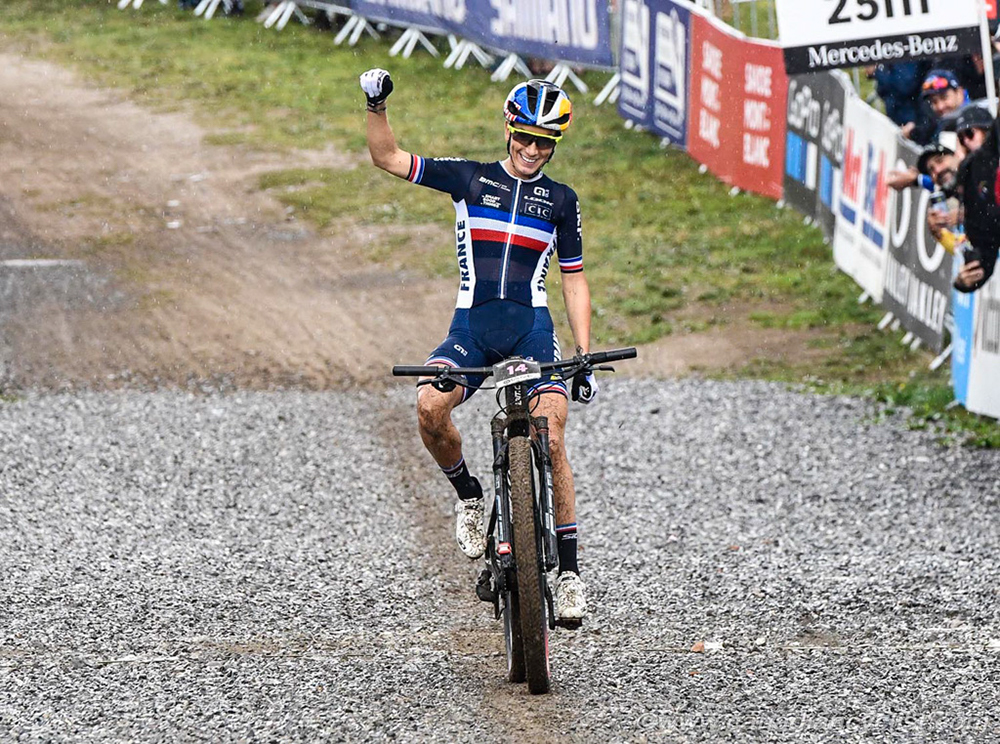 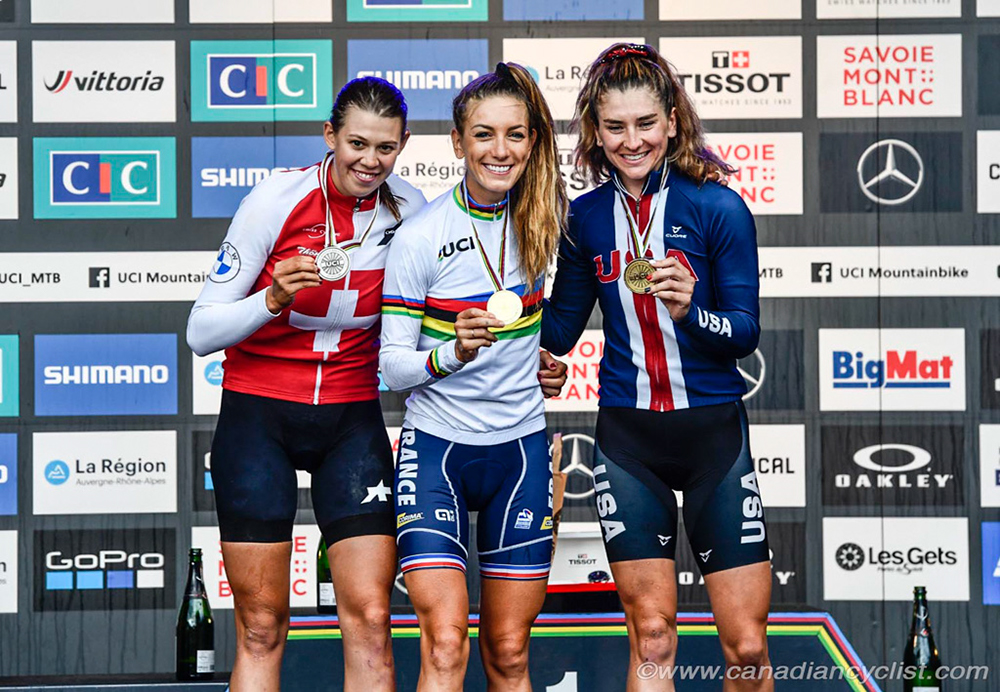 The women's race quickly came down to a core group of nine riders, with no one willing to attack too early. Rain began falling halfway through the race, making the grass corners and the rocks slippery. Ferrand Prevot sat consistently in the top-4 but out of the lead, until the seventh lap (of nine), when she attacked aggressively, opening a gap of 15 seconds on the chasers. Greta Seiwald (Italy) and Annie Last (Great Britain) led the early chase but faded, and no one else could close the gap, as Ferrand Prevot cruised into victory. Alessandra Keller (Switzerland) took silver, 18 seconds back, with Gwendalyn Gibson (USA) finishing third.

"It's crazy, you know, I can't believe it," said Ferrand Prevost about winning before a home crowd. "I saw that [the course] was not super fast, so I just wanted to stay on wheels. I had to wait, wait, but with three laps to go I made an attack and went full gas. I was able to make a gap and I tried to keep a good pace but be smooth on the rock gardens. I was feeling good in the last few days, so now it is one more gold medal in the pocket. I'm really happy."

Arseneault rode up as high as 11th before dropping back into the mid-teens. Sandra Walter was 22nd and Emily Batty 25th. Jenn Jackson did not start due to illness. 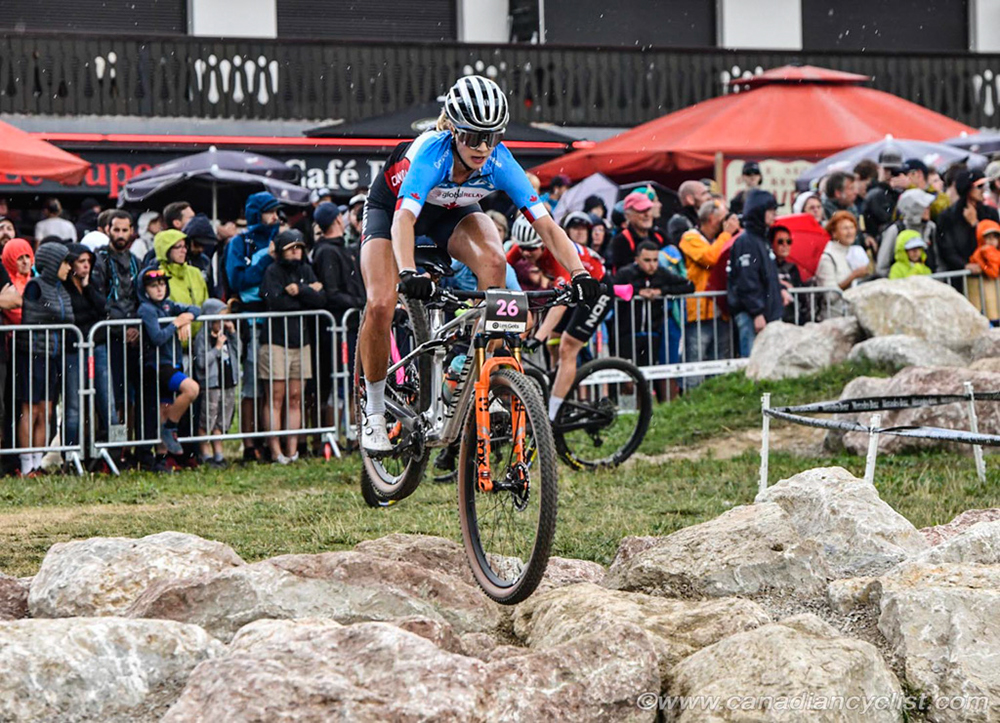 "This course was really nice," said Arseneault, the Canadian XCC champion. "I was never in the top ten, that was my goal, but a few people passed me, because I just didn't have the energy anymore. I did my best and I'm happy with it. You can never be disappointed when you give your all."

The rain had stopped by the time the men started, however, it left the rock surfaces extremely slippery, with multiple crashes happening through the race. A large group of 15 formed at the front, with surges fracturing it before the leaders backed off and the group came back together. This held until Lap 6, when Henrique Avancini (Brazil) crashed in the second last rock garden of the lap while in the lead. Multiple riders crashed into him or were forced to stop and run, splitting the lead group and forcing them to chase. On the final lap, Gaze attacked with defending champion Chris Blevins (USA) the only one to stay with him. Coming into that same rock garden that Avancini crashed in, Blevins went down, leaving Gaze free to cruise to the line. Swiss riders Filippo Colombo and Thomas Litscher took the remaining podium spots. 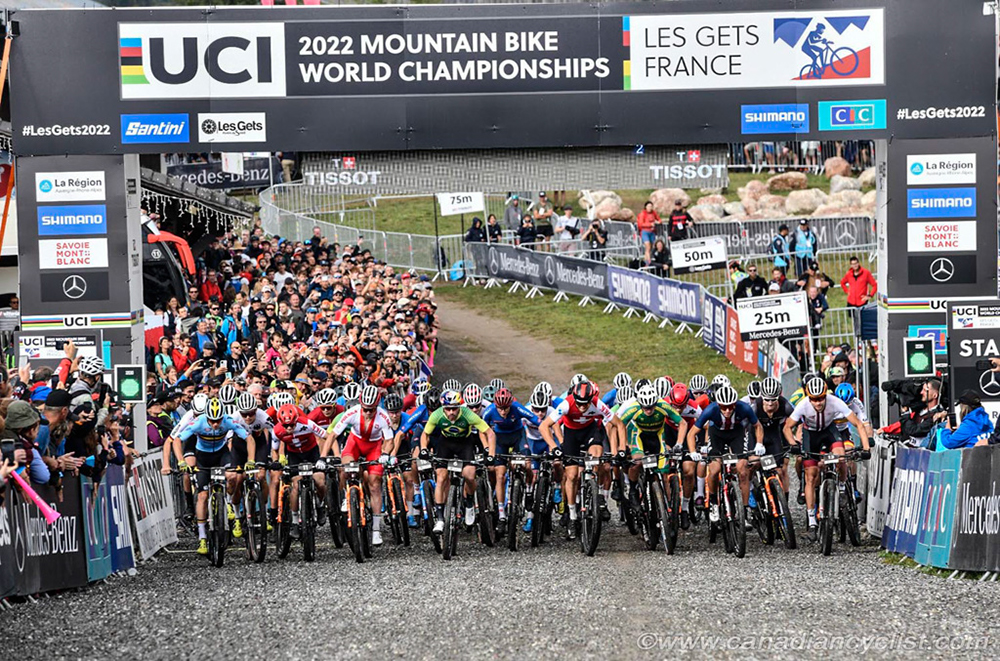 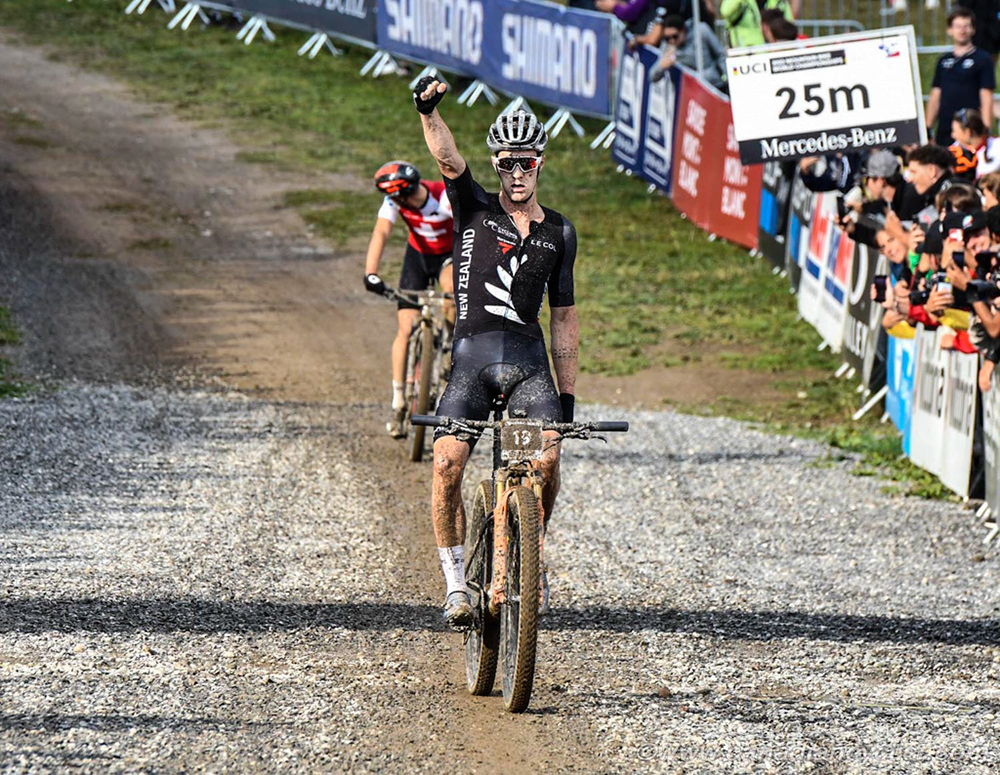 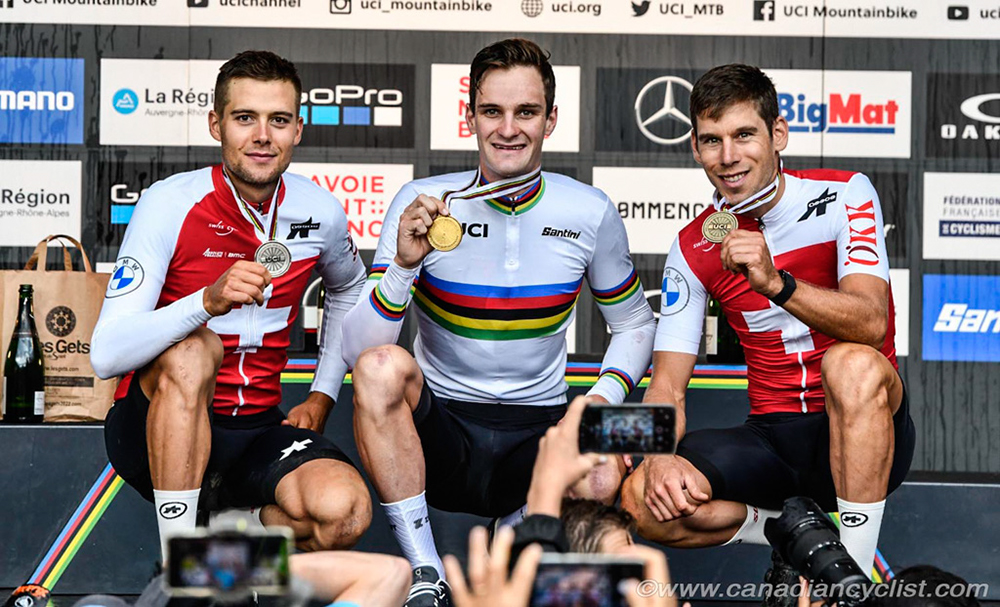 "The rain that came down before the race made it very slippery," commented Gaze, "and made it hard to keep position. Guys were crashing in front of me so I pulled it back for the first half. I knew it would come down to the last climb. Chris [Blevins] was super strong today, but he had a bit of a mishap on that last corner. Super happy, super proud ... this is a dream come true."

Canada had six riders in the men's race, with Quinton Disera getting a strong start and riding in the top-15 for the first two laps before starting to slide back, eventually finishing 30th. Fincham, who started near the back of the field, quickly moved up to the 30s, and then into the 20s on Lap 4. By Lap 7 he was into the top-20, and moved up to 17th by the final lap. Leandre Bouchard was the only other Canadian to make the top-20, in 20th place after a similar ride to Fincham's, up through the field. Peter Disera was 31st and Tyler Orschel 37th after a bad crash in one of the rock gardens. Gunnar Holmgren, after suffering an early race mechanical, was 46th. 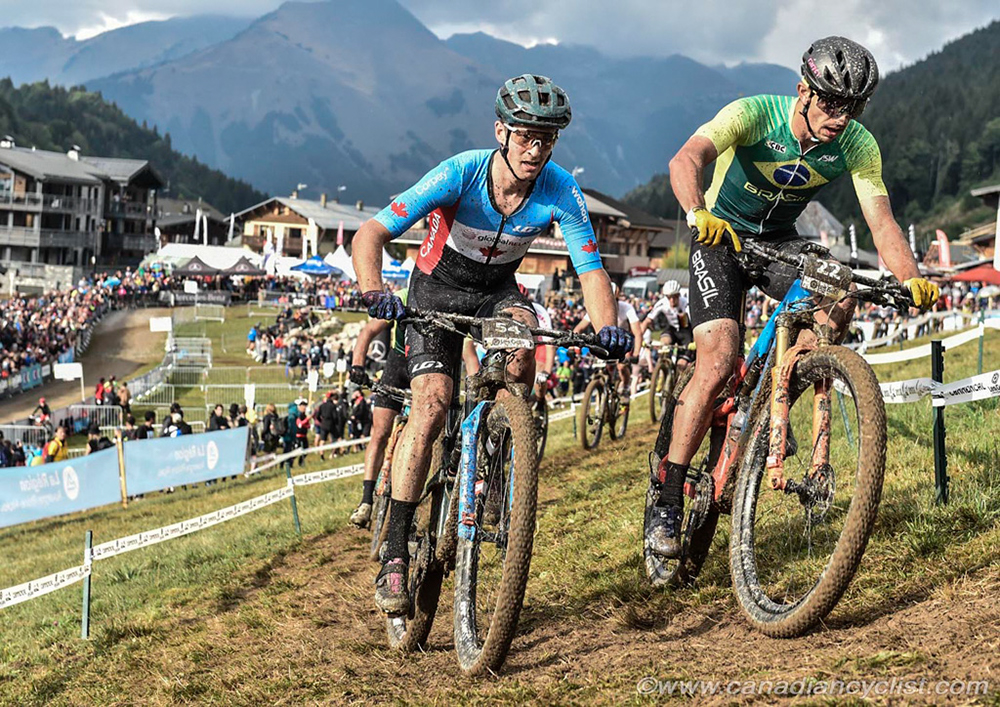 "It was a hard day starting from the back," said Fincham, "especially with the pace at the front. I tried to be on the gas and move through, but it just wasn't enough to catch that front group. But it shows the shape is there, and I'm looking forward [to the XCO on] Sunday. The rocks were like ice [after the rain]; it was way slipperier than I thought it was going to be. People were crashing and walking through the rock gardens ... it was hectic. I think everyone was caught a bit off-guard. I know I can hang with the big guys, I just need to work my way up."