On Sunday, Pauline Ferrand Prevot joined Gunn-Rita Dahle Flesja as the only women to have won four Elite XCO world titles. She did in front of an appreciative home crowd in Les Gets, France, with a dominant performance. Emily Batty was the top Canadian in 19th, with Sandra walter also cracking the top-30, in 29th.

Ferrand Prevot made no secret of the fact that winning the world title in France was her number one priority for the season, skipping the two North American rounds of the World Cup to focus on training.

It paid off, with the French rider, who recently won the European title, riding away from the rest of the field on the first lap. She had 30 seconds on a chase group by the end of the first lap, 1:35 over second place by the finish and tenth place was more than five minutes down at the end. Less than half the field finished the race on the same lap; rarely is such dominance seen at the world championships. 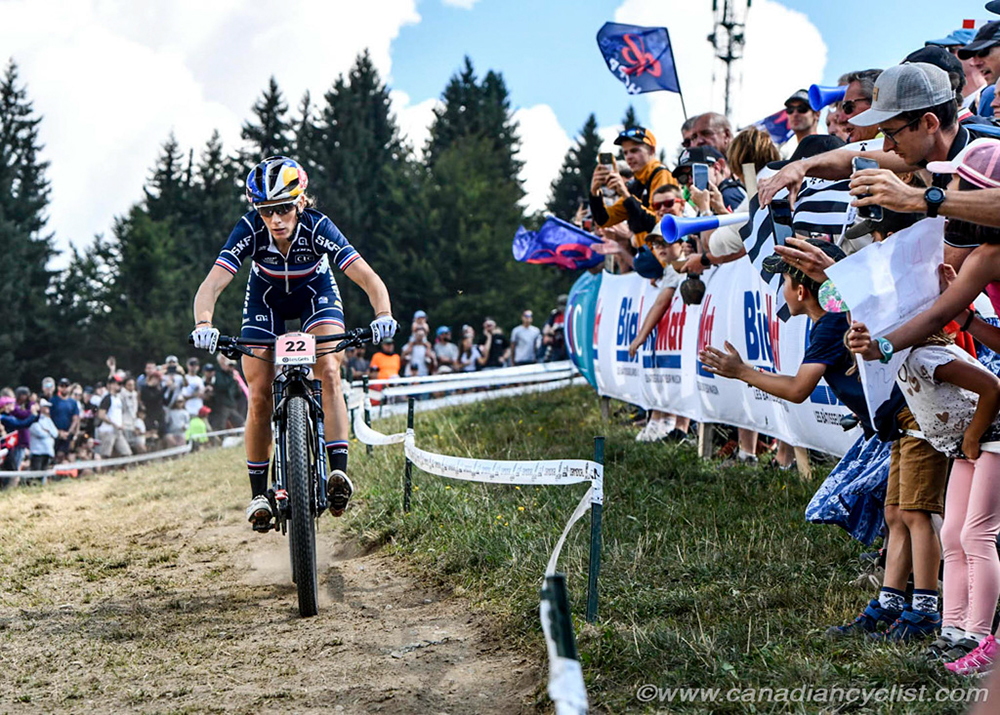 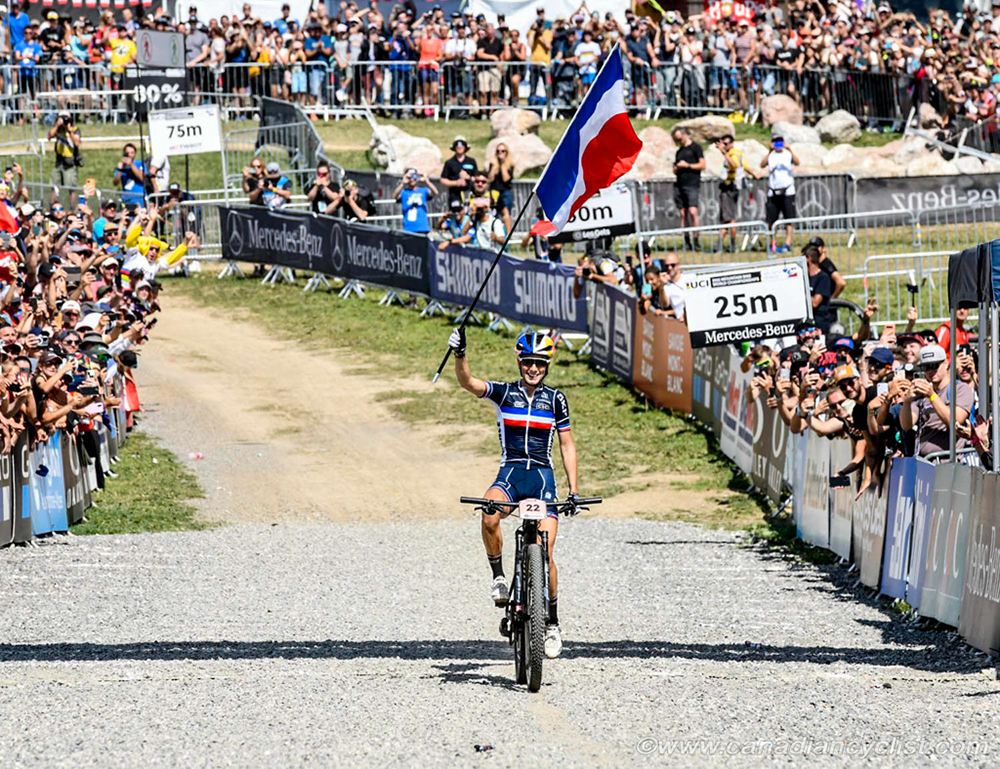 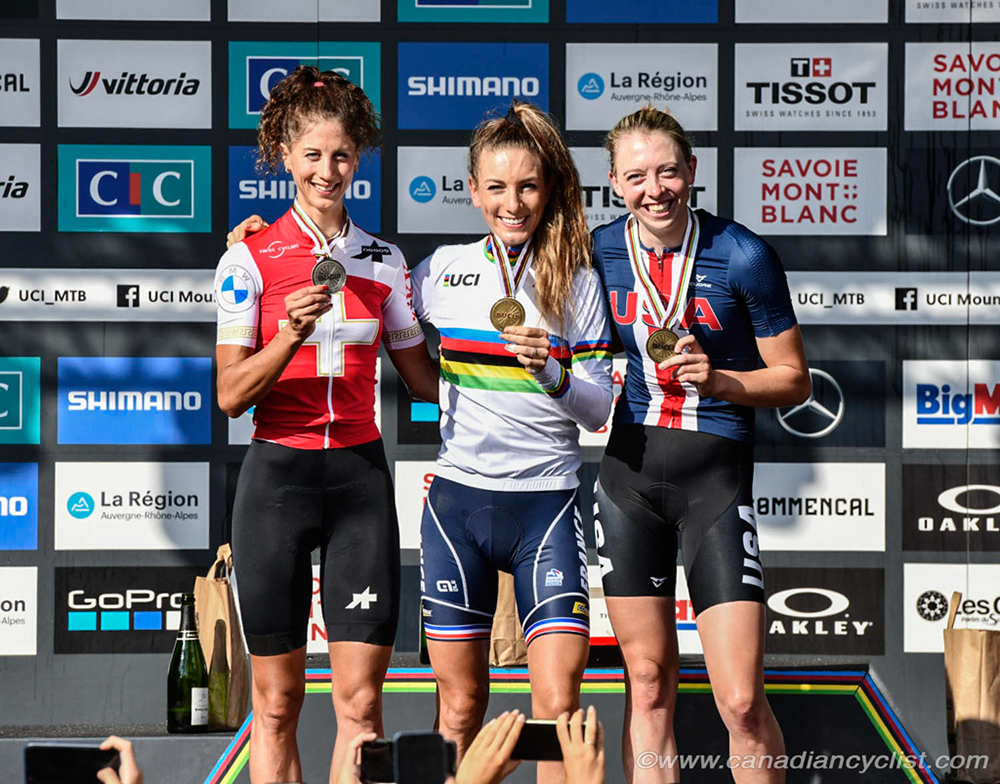 The race was behind for second, with Haley Batten (USA), Loana Lecomte (France) and Alessandra Keller (Switzerland) initially battling for the remaining medals. Lecomte was dropped after the second lap, with Batten and Keller left in the chasing positions. However, Olympic champion Jolanda Neff (Switzerland) surged mid-race to join the duo by Lap 4, and then attacked a lap later. Batten was able to follow initially before dropping back to third. Neff made little headway on Ferrand Prevot, but was able to  hold on to second for the silver medal, with Batten taking third.

"Right now I feel exhausted, but it is incredible," said Ferrand Prevot. "I made the choice to go with a hardtail bike because I knew that I could go faster on the climbs. It was a bit risky, but I wanted to go straight from the start, to go full gas and try to make a gap, and I did it. After that, I just had to be soft and clean on the downhills. Right now it feels like a dream and I can't believe it. But I want to see my parents and my friends. After that, I think I will know."

Batty moved up steadily through the race, from 30th at the end of Lap 1, to 21st by Lap 4 and into 19th on the next lap. Walter rode more consistently around 27th to 29th. 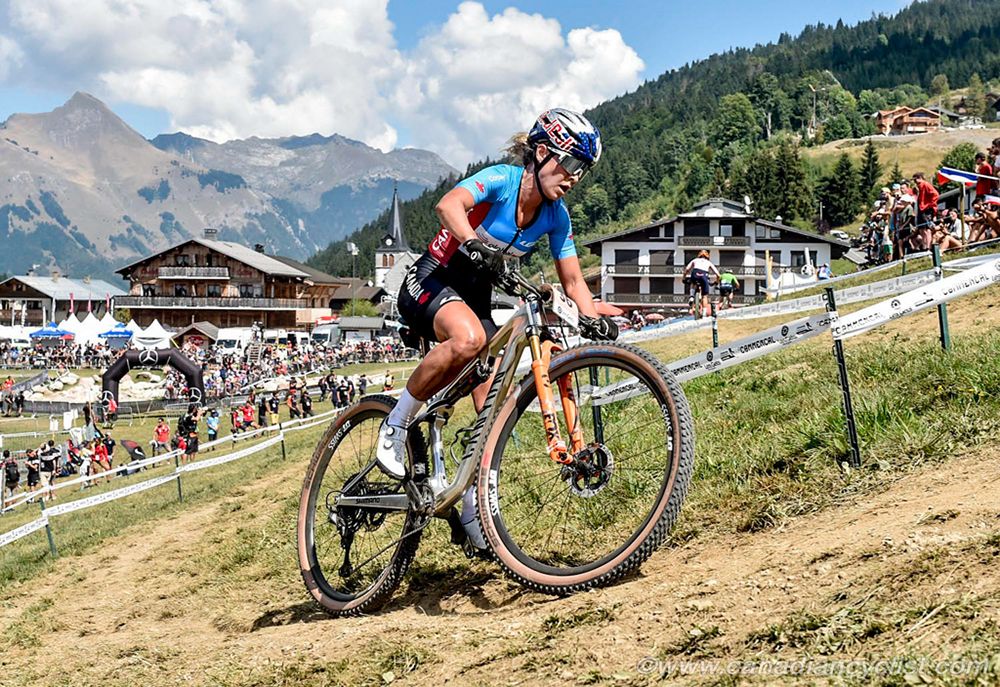 "Starting in the back is never an easy task," commented Batty. "So it's a matter of playing it safe and out of the bottlenecks and corners; just playing it smart. Once we got going, I could really race my race and pick riders off. I would have preferred another lap or starting [higher placed]. Starting [further back] is one of the hardest challenges I've ever come through. It was completely dry out there, so we really needed that rain we got the last couple of days. It was a solid day."

"It's pretty consistent with my season," commented Walter, "I've been around the top-30 average and that was my goal for today; if I could do a top-30 I would be happy with that. I felt pretty steady; the legs felt good and I just tried to race my own race and be precise on the descents and the rocks. Overall, I'm happy with how I did."