The CCA (Canadian Cycling Association) launched a pilot program in 2009 to increase the number of women involved with organized cycling. Provinces were encouraged to apply and Quebec, Alberta and British Columbia were chosen to host the programs. British Columbia launched three programs, one of which was the Girls On Wheels - a five-week program of progressive training for girls 12 years and up, led by NCCP coach Barb Zimich.

Program Name: Girls on Wheels
Created: 2009
Objective: To provide a fun place for girls to ride, learn and gain opportunities to compete. To provide a skill base that many girls and women don't have which inhibits their enjoyment of riding a bike.
Organizer(s): Cycling BC, in cooperation with the North Shore Healthmasters Society and the North Vancouver Recreation Commission - run by head instructor Barb Zimich, with assistance from Kim Atkinson and other qualified female riders.

Part of the pilot program was to really find out what works and what doesn't when it comes to getting more women involved in organized cycling. The pilot looks at everything including the promotion of the program, how it runs, how it works, the actual experience and the results at the end.

Paul Jurbala, head of the CCA's Education Programs, elaborates. "The project is about finding out what will attract more women into organized cycling. We know that as many women as men ride bikes, but there are three times as many men as women participating in organized cycling, including racing. We want to find out what works, then create a model that cycling clubs and associations can use to welcome more women into the sport."

The Girls on Wheels program was one of three that ran this past summer in British Columbia. Once approved by the CCA, the first obstacle was in getting the participation numbers up. The first thing head instructor Barb Zimich noticed was that it was a hard sell to youths, "the reason being partly because the bikes are expensive, and also because there is often not a program within the school to encourage participation."

The Participants:
The program was targeted towards any female with a background in road riding, triathlon, or mountain biking who wanted to learn road riding skills and how to race. The Girls on Wheels program promised to excite, engage and provide enjoyment for girls of all ages, 12 years and up, who choose cycling for sport. The program also attracted women that had a bike but were never taught how to ride it. 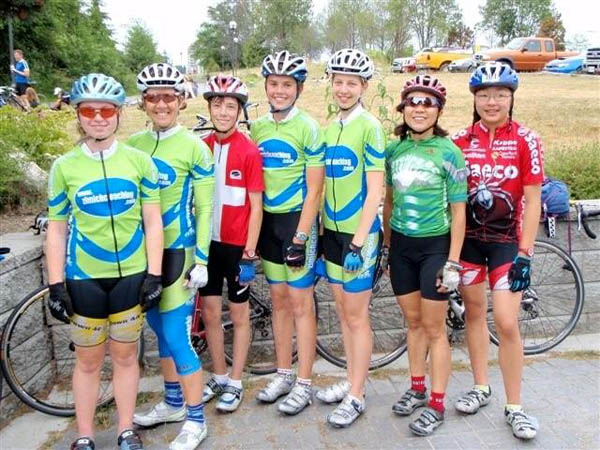 L to R: Summer Griffin 16 yrs, (she won the Cat 4 race), Barb Zimich, coach, then there are 2 boys, both turning 15 this year, Carsten Lapointe and Sam Morris (my nephew), then Karen Forsman, 23yrs, May Jung - masters woman, she's 48yrs, and then Robynne Shannon - she's turning 15 this year as well and she hangs in with the Cat. 4 women.

The Program:
The five-week program consisted of two group rides a week and an end goal that the riders chose to work towards that would help them get into racing or organized riding. One of the weekly rides focused on skills and the second on the mental training, behaviour and rules of the road.

"They get to put their skills to practice," Zimich explains. "A lot of women cyclists have a fear of traffic - they don't know what to do out there." Zimich also mentioned road riding basics like cornering or shifting gears are things that seem like basic skills to the experienced rider, but were never taught to some of the participants.

The Coach:
Barb Zimich has been racing for 22 years and coaching for 18. Her love for cycling is contagious and her passion inspires those around her. "There is nothing like riding along, looking up at the skyline and seeing the hills against the sky for that brief second before you start pumping your legs, jumping out of the saddle and having the bike accelerate underneath you and getting the speed up, holding the wheel in front of you with nothing more than will power!"

Zimich is currently the coach for the North Shore Healthmasters club. A champion herself, she has won two BC Road titles and has been a two-time Masters Canadian Road Race Champion, as well as a Masters World Champion.

The Promotion:
The program was promoted on the Cycling BC website, in the local paper and through word of mouth. Zimich, knowing that a lot of people have a bike but have just never been taught to ride it, knew the program might attract those who wanted to learn but never had a platform to do so. She also sent e-mails to the teachers involved in the North Shore Mountain Bike Series, and spoke to the Moms and the Dads already out on bikes to let their kids know about it. Zimich hopes for more widespread media announcements about the program next year "... so that people come looking for us instead of [us] trying to find them!"

The Highlights:
"Having women and girls enjoy riding the bike - and seeing the difference that it made in how they felt about riding once they had some skills and technique," says Zimich.

Zimich really enjoyed putting the group through different drills. "No matter what age they were, they really liked the relays - be it one-legged pedalling, or taking riders onto the grass, getting them comfortable on bikes - a little competitiveness within the course really went a long way!"

Zimich's favourite thing about the program was: "having an opportunity to bring cycling to more women and having a focus that is supported by the Canadian and Provincial associations."

The Obstacles:
It's difficult to get young women into bike racing. Zimich sees the topics of exposure, schedules and organization as three things that could change to get the number up. "Not having it as a high school sport available to them - that's where the sports exposure is. Schedules - girls and women don't have sport as a priority to arrange their schedule around. And the way that we are organized - there are lots of younger girls in triathlon...(why not road cycling?)..."

The question of the day:
Zimich comments on the lack of women riders involved in organized cycling like road racing. "Look at triathlon - why so many? What is it about road cycling? Have we done a good job promoting it? Participation is a part of triathlon - people don't mind being on their own in a triathlon race but hate it in a road race..."

Hopefully, the CCA's 2009 pilot programs will get us closer to the answer. They will be reviewing the results over the fall and winter and moving forward with their women's programs for 2010. Cycling4women will be covering their progress this winter.

Do you want to tell us about your women's cycling club, team or event?_Just email Leigh Hargrove at Leigh@canadiancyclist.com and tell us all about it ... We may just feature it here in the women's section of CanadianCyclist.com! Please include your name, phone number and e-mail address for us to contact you.