WARNING: Schwalbe Ultremo R tyres that exhibit bulging should be removed from use immediately. Free of charge replacements will be supplied.

Regrettably some ULTREMO R racing cycle tyres have been supplied into the market that may suffer failure during use due to a mistake in the manufacturing process, as the effected tyres’ carcass layer have not been sufficiently rubberised. In the few tyres concerned, after only a short time in use, the fault becomes clearly visible shown by a bulge due to the carcass layers becoming disconnected.

In no case should Ultremo R tyres that exhibit this phenomenon continue to be used. Replace the tyres immediately!

Danger: Not doing so may lead to a catastrophic failure, as the carcass layer can chafe through consequently causing the inner tube to burst. If you notice the phenomenon while riding, under no circumstances continue at speed. It is suggested that the air pressure is reduced to the minimum recommended while riding at low speed and with great care. 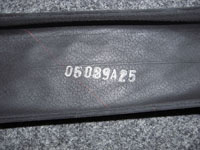 If you have been affected by the ULTREMO R fault we apologise for any inconvenience caused.

We offer a straightforward replacement service:

Send a photo of the Ultremo R showing the defect phenomenon as well as a photo of the production code that is to be found on the inside of the tyre to this special email address:

A replacement will be despatched immediately.