The first ten days at the CCA’s base in Tielt-Winge, Belgium has flown by - literally and figuratively.  The women have raced four races, all of high quality.  Many of the international teams are here for the month’s racing, so seeing the likes of the current and former World and Olympic Champions alongside National Champions, on the start line of 130 to 160 riders is becoming commonplace.

First on the list was a UCI 1.2 GP de Dottignes, which is less than two hours drive from the base.  The race profiles don’t tell the whole story, and one of the mottos of the team is ‘expect the unexpected’.  A small bump on the map turned out to be a decisive factor when the group split at 25 kilometres into the 130 kilometre race.  Joanie Caron and Denise Ramsden were well positioned and made the split.  Shortly thereafter, the riders encountered their first cobble section.  Caron stayed in her top-20 positioning while Ramsden fared a little worse, getting gapped on the cobbles and ending up in the second group.  Caron punctured, got a change from the neutral car and by that time the front two groups were long gone.  She was left to battle on her own until the remaining groups on the road reformed.  Ramsden’s group caught the front group that reeled in the break 20 kilometres before the finish and she ended up 51st in the classification bunch sprint. 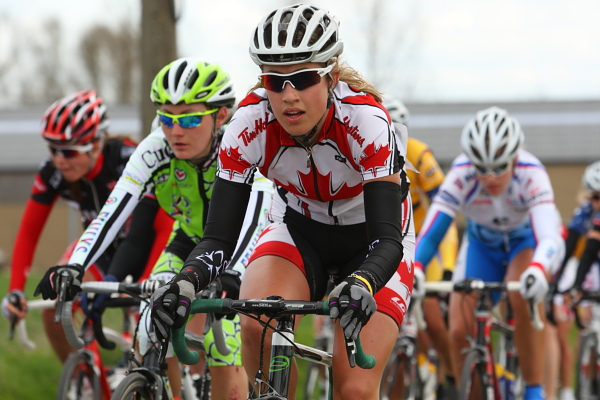 The team then packed up and headed to Holland for three races in four days - two UCI 1.1’s and a World Cup.  A highlight of this ‘road trip’ was the deluxe hotel, complete with orchids in every room.  One of the team’s goals for the first race - ‘Drentse’ - was to have as many riders ‘classified’ as possible.

Positioning is the key, and with narrow roads, cobbles, bridges and zig-zags through towns, the challenge can be overwhelming to riders new to the Dutch classic racing scene.  A small break of 11 formed with 40 kilometres to go in the 140 kilometre race, followed by a chase group with 2- or so riders, including Joanie.  Fifteen kilometre from the finish, Caron took a corner too fast and slid on the omnipresent manure and her race was over.  A bump on the head and knees were thankfully all the injuries she sustained.  Leah Kirchmann, Amy Dearden and Ramsden made a good showing finishing in a group seven minutes back in 81st, 86th and 107th respectively.  Moriah MacGregor finished the race but was outside the timed five percent time limit.

The Unive Ronde van Drenthe World Cup celebrated it’s 50th year, complete with bands, dinner and a well choreographed team presentation.  Heather Logan joined the team after two days of travel that resembled a hard stage race itself and the team was now complete with six riders.  Three sections of two to four kilometre long cobbles would be the deciding factor in this race. 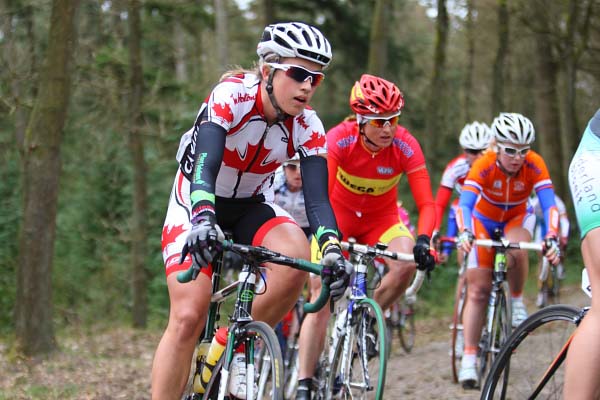 As the peleton approached the first cobbles at the 40 kilometre mark, a crash at the front caused some mayhem.  At the end of that section, five or six groups were formed.  Logan made the front split, with Ramsden just missing the move and ending up in the second group.  Another puncture for Canada, as Logan was serviced by the neutral car and, despite her best efforts, couldn’t make it back to the front before the next cobbles arrived.  Ramsden chased hard with the second group that eventually caught the first chase group.  A break of 13 riders stayed away and Ramsden sprinted to 37th place in her first European World Cup (and second ever).  Almost half the peleton was pulled with 30 kilometres to go.

The final race of this series, Novilon Eurocup Ronde van Drenthe, was held on similar roads with only one section of cobbles.  The wind became the deciding factor in this race.  Canada was doing a great job of asserting themselves at the front, with MacGregor making her presence known.  Yet again, the puncture, mechanical and crash deities were not on Canada’s side, as Ramsden punctured ten metres before the cobbles ended and Logan’s rear brake seized tightly, causing major problems.

Ramsden was able to use the caravan to get back to the main group, which contained the other Canadians, just as an intermediate sprint was played out, followed by crazy attacks which split the group into three.  Logan clawed her way back after almost 40 kilometres of motorpacing, caravan surfing and time-trialling.  The main group was pulled after the deficit to the front hit the six minute mark.  Only 29 riders were classified on this day.

The team packed up and drove the three hours back to the ‘home away from home’ in Tielt to hot showers and home cooked meals.  It was quite an introduction for the Canadian women to the highest level of racing on the Continent.  They acquitted themselves admirably and have more knowledge and experience in the bank for upcoming races, including the infamous Fleche Wallone on April 21st.