Ben Day (Fly V Australia) survived a a final tough day of racing to become only the second rider in the 25 year history of the Tour de Beauce to win the race twice, joining Levi Leipheimer in that exclusive club.  Hector Gonzalez (Heraklio-Murcia) won the final stage after attacking out of a race-long breakaway, with Jackson Stewart (BMC) second and Will Routley (Team Canada) third. 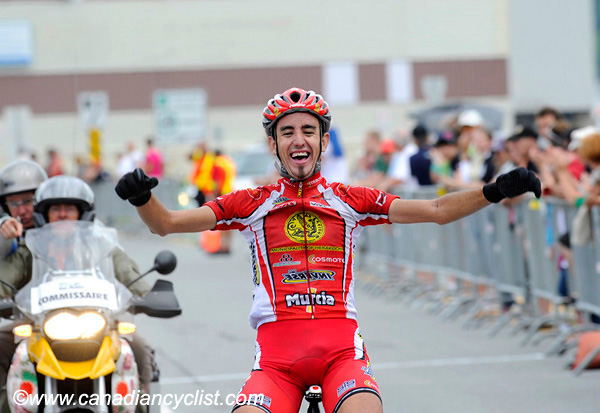 Hector Gonzalez wins stage 6
The Tour de Beauce traditionally concludes with a circuit race around the host town of St-Georges.  For 2010, the usual hilltop finish was replaced by a flat two kilometre section through the center of town.  However, the 12 kilometre circuit, which the riders covered 11 times, still included a long and technically challenging climb each lap.

The rain which the race had managed to avoid all week arrived just as the stage started, and quickly turned into a torrential downpour - the worst in the entire history of the race.  Visibility dropped to no more than 20 metres, and riders and support vehicles had to gingerly negotiate the twists and turns of the course as streams ran down the streets.  The heavy rain lasted for two laps and gradually slackened, before finally stopping by the final third of the race. 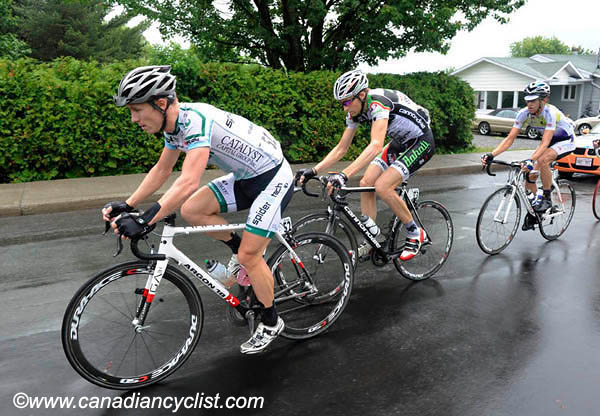 Ryan Roth at the front of the break
The conditions played a considerable factor in the success of a breakaway which went off the front of the peloton just as the worst of the rain hit.  A group of nine riders formed on the first lap - Gonzalez, Routley, Stewart, Jamie Sparling (Team Canada), Caleb Fairly (Felt-Holowesko), Bahati Foundation team mates Jason Donald and Nathan O'Neill, Ryan Roth (SpiderTech p/b Planet Energy) and Chris Jones (Team Type 1).

Roth was the danger man for Day, at just under two minutes down on GC.  Within a lap the lead was up to nearly a minute and continued to climb.  O'Neill, a former Beauce winner and second in this year's time trial, was driving the pace.

"It was all Nathan, he was going so hard that we almost couldn't hang on," said Routley.  O'Neill continued hammering until lap seven and then blew up, eventually dropping out of the race.  By lap four the lead was over two minutes, and a lap later it was 2:50.  Roth was now the leader on the road. 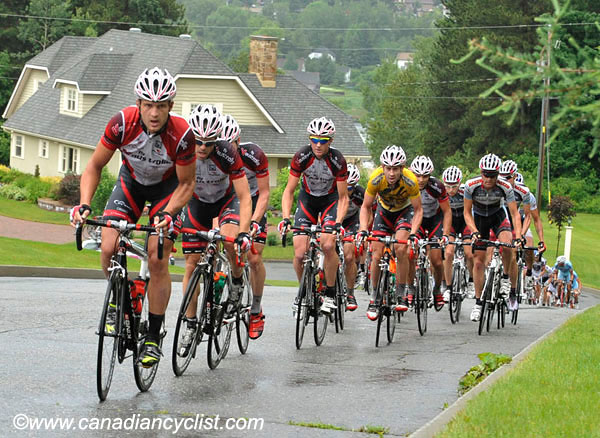 Fly V Australia riders were constantly at the front
Behind, Fly V Australia was struggling to contain the situation, which was exacerbated by Day breaking the saddle of his bike and having to change machines.  Their riders were constantly at the front, closely followed by the United Healthcare team of third place Marc de Maar.  It began to take its toll, as Fly V riders started slipping off the back.  By the final two laps Day had only Darren Rolfe (second on GC) and Jay Thomson left.

By lap nine, United Healthcare decided that they had better lend a hand to protect their third place spot, and put in a strong effort that brought the gap down below two minutes as the riders began their final two laps.  Over the last two laps the break began to disintegrate and the gap started to drop down towards one minute.

Team Canada, with two riders in the break, sent Sparling off the front with a lap and a half to go.  Initially, he gained 10 seconds on the group before they got organized and chased him back by the start of the final climb.  As he was caught, Fairly and Routley counterattacked, but were immediately brought back.  Gonzalez then took advantage of a momentary lull in the action to make his own move just before the final steep section of the climb.  No one was willing to take control of the chase, and Gonzalez gave Heraklio-Murcia their second win of the week:  the first stage and the last.

Stewart outsprinted Routley for second as the break rolled in 16 seconds behind Gonzalez, with the peloton only 12 seconds behind them.  The stage saw 36 riders abandon, including four members of Fly V Australia.  The team still took the top spot on the general classification, as well as Day winning the Points Jersey.

Day said the win was all due to his team, and on the podium turned and bowed to them.  He also commented, "This win probably means more to me than my first one [in 2007].  At that one I met my future wife [Isabel Vachon] of the race organization], and we got married this January.  To win here now, in front of her and all her family, is very meaningful to me."