With the mayor there to start the race, 144 cyclists rolled out en mass to battle the roads and gravel of the second running of the Clarence –Rockland Classic.

Nearing the end of the first gravel section, a small group containing Chris Reid (RWR), Imad El-Ghazl (Kunstadt Sports) and Tim Carleton (Ride all Day/Real Deal) slipped off the front of the field and slowly started to build up a lead that would top out at just over a minute. 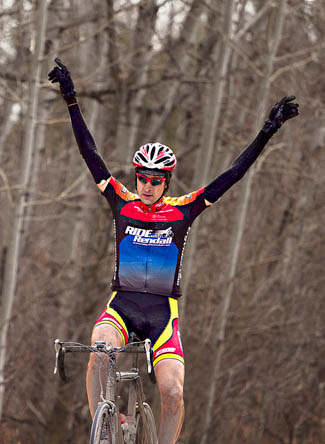 The large main pack was content to ride intact until the 38 kilometre mark, when the pace spiked and the field was put under pressure by a series of attacks and surges on the front. When the pace slowed, Mason Hanrahan (RWR), followed by Marty Zollinger (RWR), launched an attack and were quickly covered by Warren MacDonald (Nine2Five Pro), who was now back in the field after a flat tire. Immediately after, Aaron Fillion (RWR) pulled away from the bunch and quickly joined the three riders who were now organized and in pursuit of the break.

Five kilometres of solid work, and the chase group of four had caught the lead group of three. The lead group of now seven contained four RWR riders; as a result, it was the RWR Team that was driving the break. After a long section on the road, the group of seven turned on to another tough gravel section. At this point, the RWR Team was still doing the pace setting in the group.

At 56 kilometres, with just under 30 kilometres remaining in the race, Fillion attacked from the back of the group and went clear. With the RWR riders now sitting on the group, he was able to quickly gain a lead. MacDonald was then forced to do the lion's share of the work in order to pull him back. Once the gravel section ended, MacDonald began to gain on Fillion, and it looked like Fillion was going to get pulled back in. However, as Fillion crested over a hill he started to gain back the ground lost. Fillion continued to keep the pressure on, avoiding any mishaps, and was able to solo in for the victory for a second year in a row. Nearing the end of the race, Hanrahan was able to escape from MacDonald and come in second, with MacDonald in chase finishing third.  (photo by Czara Ansar)

The U-19 mens win went to Karl Hoppner (EMD Serono), who hung in with the front group to finish in the top 15 overall. Prud'Homme-IGA rider Robert Cooper took second place, with Wil Etherington (J&J Cycle) coming in third.

The women's field was a war of attrition and well-timed bad luck, as all top three had to contend with flat tires or mishaps. Taking the win after riding solidly in the main pack before a flat tire, was Stevens rider Trish Spooner.  Second place went to Natasha Elliott, who also had to contend with an early flat. Just behind Natasha was Veronik Bourgon of Eurosports-Foodery to round out the podium.  The U-19 women's win went to Emily Flynn (EMD Serono) who repeated again with a solid ride that would have placed her fifth in the open women's field.

More photos can be found at ridewithrendall