Tuesday night's MIVA criterium was the best attended yet, with 19 starters in men's and women's events. After the two initial neutralised laps, Chris Cameron (NRC) cruised just of the front of the bunch waiting for someone to join him. There were a few half-hearted attempts but nothing serious until lap 13, so Chris took the first of four primes easily.

Then, after a three lap regrouping, Everti's Mike Sevcov took a flyer and established a five second lead in pursuit of the second prime,but he was pulled back before the end of the lap and the prime was taken by MIVA's Ian Smith who just edged Chris Cameron, NMBC rider Kirby Villeneuve and new MIVA member, Rob Russell.

Everyone but Cameron then relaxed and the NRC rider was able to take a brief lead out front. He was still about seven seconds up, with NMBC's Bill McMillan stuck between him and the bunch when the bell went for prime three. Within a lap both had been caught and the prime was taken by fast man Smith who added to his spoils for the evening.

As the race entered the last ten minutes Sevcov had another session off the front but when the bell went for the final prime, he was back in the group and Ian Smith won his third sprint. With only two laps left, Chris Cameron and Kirby Villeneuve broke away but were pulled back by the accelerating bunch by the start of the bell lap. This set the stage for a bunch sprint and the top eleven riders all finished with the same time. They were led in by Cameron, who just pipped Smith and MIVA's Lionel space for the win.

In the women's event, there were just two participants and MIVA rider Charlene Hay comfortably won over Everti's Glenda Harling, who was having an off evening.

Thanks to Brodie Hay, still suffering from a lingering cold, who did sterling duty in charge of lap board, bell and flags.

Reminder Due to the set up for this weekend's BCMCA Stage race, there will be no time trial this Thursday. 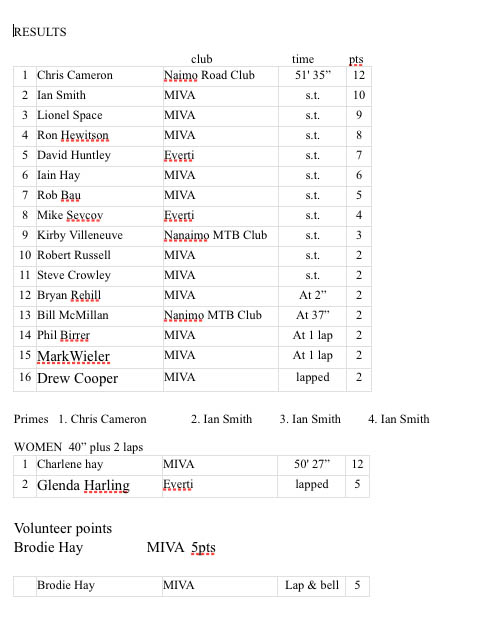