Today, the race for the overall title of the 2011 Amgen Tour of California (AToC) finally got underway.  With two serious climbs, including the first ever mountain top finish in the history of AToC, the general classification was completely rearranged at the conclusion of stage four.  Chris Horner (RadioShack) literally rode everyone off his wheel on the final climb to win the stage and take a commanding 1:15 lead over team mate Levi Leipheimer.  Ryder Hesjedal (Garmin-Cervelo) was the top Canadian finisher in seventh, and SpiderTech took the Climber's Jersey with team member Pat McCarty.

The 131 kilometre stage from Livermore to San Jose took the riders through rolling hills before they hit the first climb - Mount Hamilton.  Mount Hamilton is ranked as an HC (Hors Category) climb, the highest ranking.  After a narrow, twisting and fast descent, the riders almost immediately faced the final five kilometre climb up Sierra Road, overlooking San Jose. 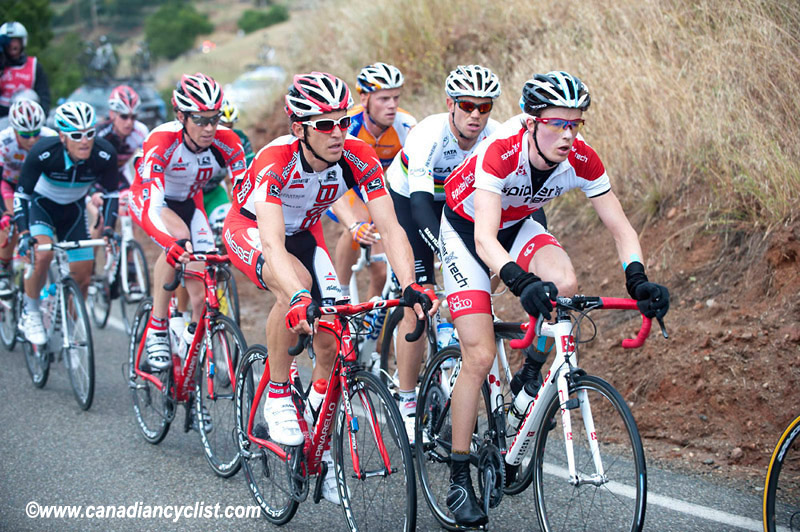 Will Routley in the break

The break initially gained three minutes quickly, but when the race hit the base of Mount Hamilton, and RadioShack applied pressure, the front riders came back quickly, with Vennell the last to be caught three kilometres from the top.  RadioShack set a punishing pace, and no one was interested in trying to challenge them.  McCarty jumped 200 metres from the top to take the maximum climbing points, but the remnants of the disintegrating peloton crested the top together.

"It was our goal today to win the King of the Mountain jersey. We wanted to put Will or Ryan in the break to cover the first three mountain sprints with the possibility of going over the HC Climb too. When RadioShack and Sky controlled the break tight, we had Pat McCarty reserving for the final. Pat superbly won the HC Mountain top and grabbed the lead," said Steve Bauer, Directeur Sportif of Team SpiderTech. 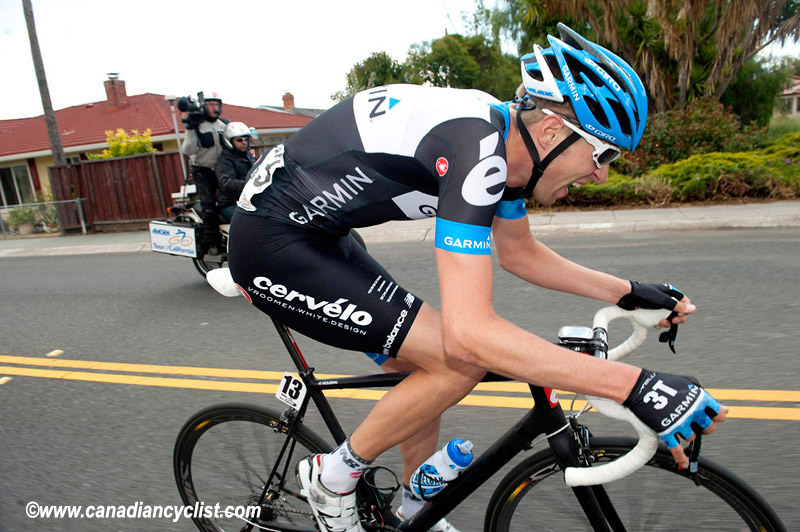 On the long descent, Hesjedal decided to shake things up, and attacked on the one of the level sections.  He quickly gained 15 seconds, then 20, and was joined by Rabobanks Paul Martens.  Martens was unable to assist Hesjedal very much, as the Canadian powered along the flat section leading into the final climb.

"There was a little bit of an uphill section, and the team talked about it," explained Hesjedal.  " We wanted to be aggressive and put some pressure on RadioShack, because you never know what is going to happen behind.  On the downhill I was putting the bike through the motions, and got a little time, but Martens unfortunately couldn't contribute too much."

"We got a head start on the climb, but I needed more time than [50 seconds] with Chris and Levi behind me.  When they caught up, Chris kept going and Levi just sat on me, while I was waiting for my team mates to come up."

At the base of Sierra Road, Hesjedal and Martens had 50 seconds, and Hesjedal quickly dropped the Rabobank rider.  However, Horner was just about to detonate the remaining group of contenders. 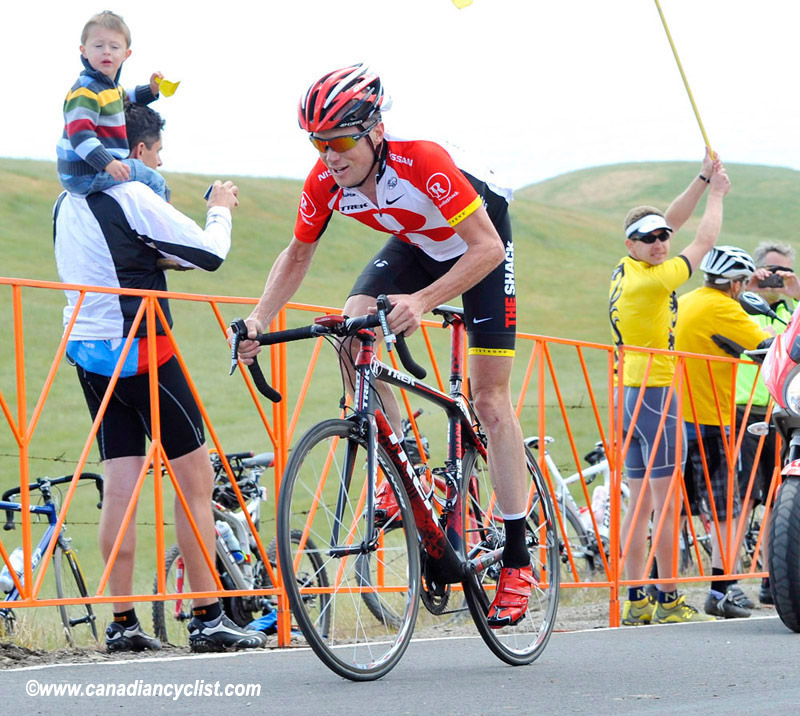 Chris Horner on his way to winning Stage 4

With Leipheimer on his wheel, Horner caught Hesjedal with less than three kilometres to go, and then dropped both riders to solo in for victory and the race lead.  Behind, Andy Schleck (Leopard-Trek), Rory Sutherland (UnitedHealthcare) and Hesjedal's team mates Tom Danielson and Christian Vande Velde slowly caught up to Hesjedal and Leipheimer.  This group split apart in the final kilometre, with Schleck taking second just ahead of Sutherland.

- We have put up a number of videos, including one with Pat McCarty, where he discusses the team strategy to take the Climber's Jersey.

- Ryder Hesjedal said that Garmin-Cervelo will continue to fight, despite Horner's considerable lead.  "It will continue to be a hard race, but we have the numbers (five in the top-12) and the riders who can do it, so we'll play the cards the best we can.  Chris [Horner] is clearly very strong, but the time trial will have an effect and Mt Baldy [on Saturday] will be the final showdown.  We are not laying down."