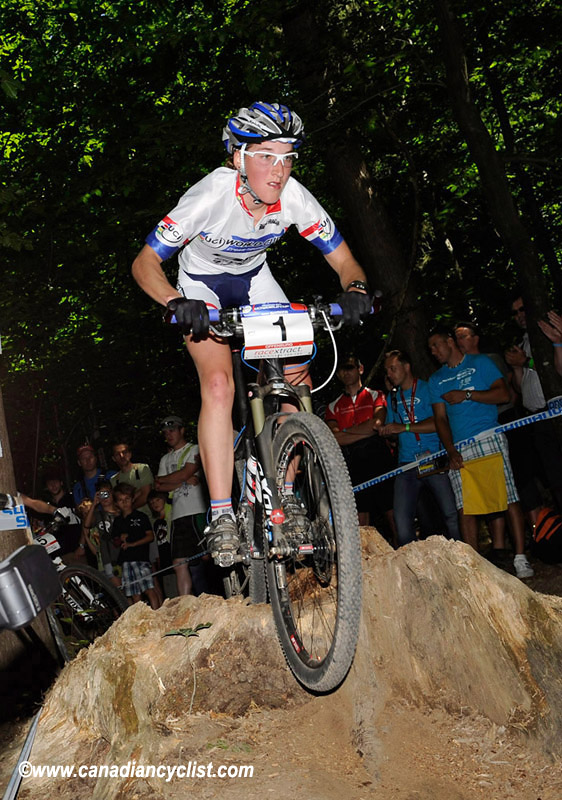 The UCI Mountain Bike World Cup has left Europe to make its only foray into North America, for two rounds in Canada and the US, beginning with the legendary Mont Ste Anne venue in Quebec.  Fittingly, Mont Ste Anne begins on Canada Day!  All three disciplines - 4-Cross, Cross-country and Downhill - will come together for the first time since the opening round at Pietermaritzburg, South Africa in April.

Mont Ste Anne returns to its traditional late June - early July slot after hosting the world championships last year and, once again, riders can expect a mixture of mud, heat and humidity for the weekend.  It has rained quite a bit over the past few weeks and, although it is not raining at present, the tracks in the wooded sections are still very muddy, with water running down parts of the downhill course.

The action begins on Friday with round four of the 4-Cross competition.  Jared Graves (Yeti Fox Shox) holds a 50 point lead in the men's standings over David Graf of Switzerland, but that could soon change in the rough and tumble action of this event.  On the women's side, Anneke Beerten (Milka Trek) is much more secure in her lead, with a 120 point lead over second place Lucia Oetjen of Switzerland.

The Cross-country, on Saturday, always draws huge crowds due to the presence of locally born favourite Marie-Helene Premont (Maxxis-Rocky Mountain), who always seems to have extra strength on this course.  Premont will be looking for her first win of the year here, but she will have a tough battle against World Cup leader Julie Bresset (BH-Suntour-Peisey Vallandry) (right), who is almos unbeatable this season.  Canadian champion Catharine Pendrel (Luna), is another rider who has done well on this circuit in the past. 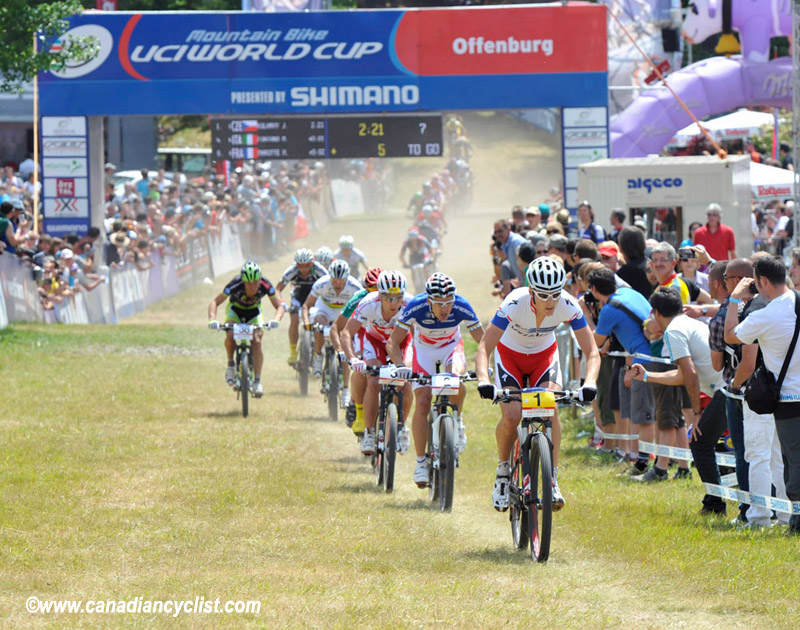 Jaroslav Kulhavy out front in Offenburg

The men's cross-country will miss current World Cup leader Julien Absalon (Orbea) from the start line.  Absalon stated after round three in Offenburg, Germany - which he won for the fifth consecutive time - that he would skip the North American rounds to focus on preparations for his attempt to win a fifth world title.  However, this will give his rivals the opportunity to battle for the World Cup leader's jersey.  Jaroslav Kulhavy (Specialized) and defending World Cup champion Nino Schurter (Scott-Swisspower) are the two strongest contenders. 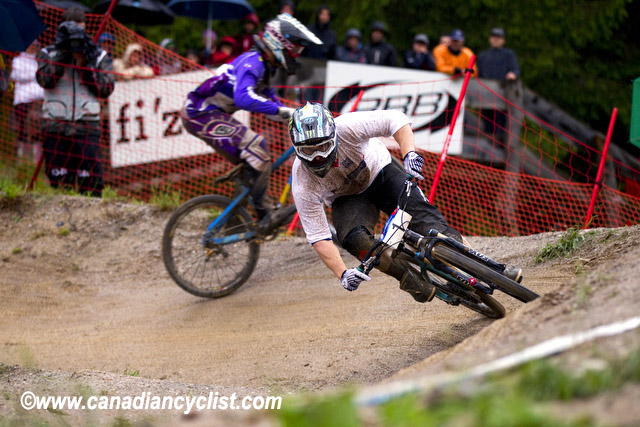 The weekend concludes with the Downhill, and Mont Ste Anne is one of the longest and toughest courses on the circuit.  The Trek World Racing duo of Tracy Moseley and Aaron Gwin have proven to be the most consistent riders this season, leading the women's and men's standings coming into this fourth round.  Moseley leads the young French rider Floriane Pugin (Scott 11) by a commanding 90 points in the women's series, but Rachel Atherton (Commencal) is also coming back strong after missing the arly part of the season due to injury. 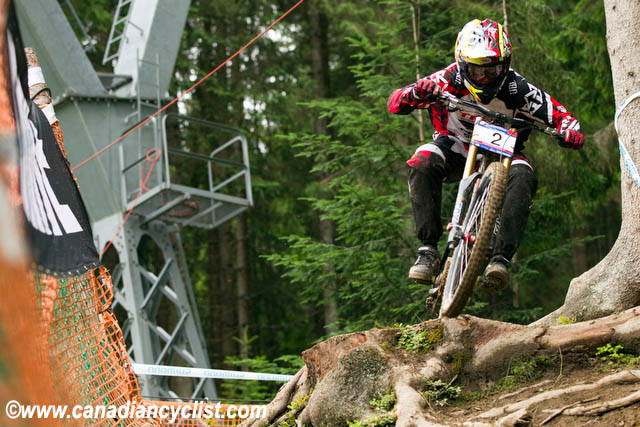 Aaron Gwin regained the men's lead from his main rival in round three, Greg Minnaar (Santa Cruz Syndicate).  However, Gwin's lead is a narrow 46 points, so this competition is far from over.  Another possible contender is Canadian Steve Smith (Devinci), who won the silver medal at the Worlds last year on this course.  Missing from competition will be Sam Hill (Monster Energy-Specialized-Mad Catz), who won the world title here last fall.  Hill has re-injured the shoulder that put him out of action for much of last season, and is not expected to be seen racing before Worlds.