Canada won its third medal of the Track Cycling World Championships on Friday, when Zach Bell took the silver medal in the men's Omnium.  Glenn O'Shea of Australia won the gold medal, and Lasse Norman Hansen of Denmark the bronze.  In other Canadian results, Tara Whitten is sitting third halfway through the Women's Omnium competition, and Canadian sprinters Joe Veloce and Travis Smith were 34th and 41st respectively in qualifying for the Men's Sprint, and did not advance.

Great Britain's Victoria Pendleton has become one of the most successful female track sprinter in history after winning her sixth women’s individual sprint crown.  Pendleton, the reigning Olympic champion, joins Soviet cyclist Galina Zareva as equal top winner of the women’s sprint title.  Pendleton’s previous titles were in 2005, 2007, 2008, 2009 and 2010.

The 31-year-old defeated Simona Krupeckaite two-zero in the final, when the Lithuanian was relegated in the second heat for not holding her line in the finish straight.  The decision was greated by loud booing from the capacity crowd.

Pendleton's win was as much a product of offiicial's decisions as it was wins.  In the semi-final against archrival Anna Meares of Australia, Pendleton crashed herself in the finishing straight of the first heat and received a warning.  She clearly lost the second ride, but Meares was relegated for leaving the sprinting lane, and then won the third deciding ride to advance to the final.

Pendleton went up against Krupeckaite for the title, winning the first ride cleanly.  It appeared that the Lithuanian won the second ride, but she was relegated for leaving her lane in the sprint.  The decision was announced after both riders had left the track, and were preparing for a third ride.

Pendleton collapsed to her knees and burst into tears when the announcement was made.

“It’s not the way I want to win,” Pendleton said.


The British rider said she did not expect to be competing for gold on Friday.

“When I raced Anna Mears in the semi, I thought I’d be riding for the bronze medal,” Pendleton said.

“She’s such a fantastic opponent, there’s been a lot of chat in the media ... and she was so strong last year and in London I honestly thought she had the upper hand so to make it through that far I thought it was a really amazing achievement.”

Pendleton also announced that she will retire after the London Games.  “This is probably the most significant and probably one of my most emotional world titles, being that this is the last time I'm going to do this, so it means a lot to me,” Pendleton said. “It probably means as much as the first one.”

“I thought I could win today,” Krupeckaite said.  “The judges were not fair, I think.”

Meares won her bronze medal ride-off 2-0 against Lyubov Shulika of the Ukraine.

Meares said she could not let the disappointment in losing the semi-final distract her from the main goal, London in four months.

“Deal with it, learn from it and implement the new strategies I need to be better,” Meares said the level of racing has risen as the cycle approaches its four-year peak.

“It’s an Olympic year, the qualifications are close, the races are hard fought, we’ve seen crashes and relegations,” she said.  “People are really starting to fight very hard because that how important it is.”

Glenn O’Shea gave the home crowd the chance to sing Advance Australia Fair for the second time of the championships after he won the Men’s Omnium.

O’Shea entered the final event of six tied with Canada’s Zach Bell on 20 points but the Australian was second in the final men’s kilometre time trial, with his rival placing eighth, for him to win his first Omnium world title with 22 points. 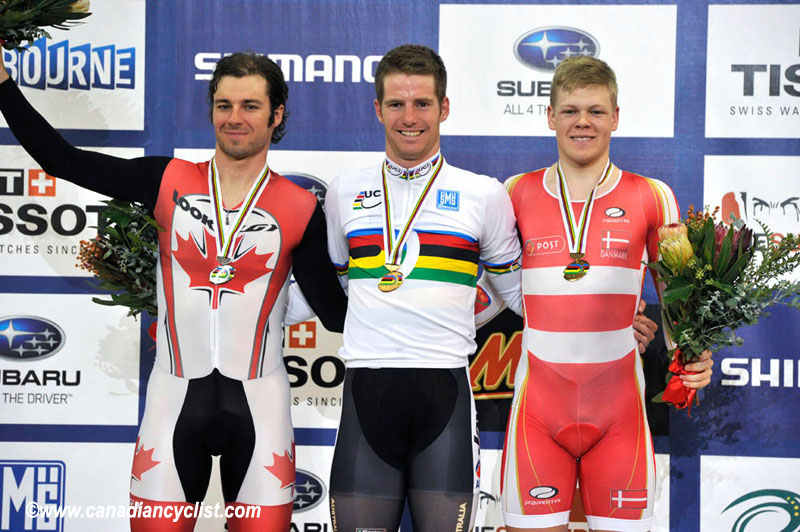 "I was hoping to be able to pull out something special," admitted Bell.  "But I'm thinking four months down the road, and to get back on the podium after a few years of struggling at Worlds was really positive.  I was taking it step by step.  I've been struggling with individual events, so I was just trying to put it back together.  I tried to be as technically consistent as possible and, coming into the second day close the lead took some of the pressure off.  Glenn [O'Shea] had a final ride that I couldn't possibly match.  But I'm going to talk with the coaches, and we are going to do everything to change this into the right colour for London."

The 21-year-old is the third Australian in four years, following Leigh Howard in 2009 and Michael Freiburg last year, to win the world Omnium title.

O’Shea said it was “unbelievable” to win in front of a home crowd.  He said his progress in the past 18 months to the point where he was competing at the world championships was “amazing”.

“Twelve months ago, I was working a part-time job,” O’Shea said.

The Australian’s consistency over the six events, with him placing no lower than sixth in any event, won him the title.

Hansen won the individual pursuit and the Scratch Race to catapult himself into third spot to 29 points, one behind than Bell.

Clancy won the final kilo time trial, which lifted the 2010 world champion to 29 points but the British rider missed out on bronze when Hansen's total time for the three timed events was lower.

Former world champions Sir Chris Hoy (Great Britain) and Gregory Bauge (France) could set up the ultimate clash in the men’s sprint after both qualified for the semi-finals.

Hoy did it the hard way, progressing via a repecharge and a best-of-the three quarter-final against German Robert Foerstemann.  Hoy will meet his compatriot Jason Kenny, the defending world champion, in the semi-final in what will be more than a fight for the gold medal ride, with the two still competing for the one spot available to the British team in the event at the London Olympics Games later this year.

Bauge, world champion in 2009 and 2010, cruised through his races unbeaten after qualifying in a world championship record time.  The 27-year-old posted 9.854 seconds for the flying 200 metres.

The Frenchman will meet Shane Perkins tomorrow night after the Australian progressed to the semi-final when Mickael Bourgain was relegated in the third heat of their quarter-final for not keeping his line.

Pawlowska surged on the back straight of the final lap of 40 to withhold the late charge of Australia’s Melissa Hoskins and Belgian Kelly Druyts.

Czech Jarmila Machacova was the most aggressive rider during the race and made her final attack with four laps left but could not hold off the chasers.

The 22-year-old Polish rider said she was lost for words in describing her win.

Australia’s Annette Edmondson made a strong start in the women’s Omnium, taking out the Flying 200 metre sprint in 14.377 ahead of Great Britain’s Laura Trott (14.391) and China’s Huang Li (14.427), with Canada's Tara Whitten, the two-time defending champion, only managing sixth.

Lisa Brennauer of Germany narrowly took the Points race, ahead of Jarmila Machacovo (Czech Republic) and Angie Gonzalez Garcia (Venezuela).  The trio took a lap with Japan’s Kanako Kase, who finished fourth.  Whitten was one of the most aggressive in the race, but was heavily marked.  The Canadian tried to break away multiple times, but was instantly chased down.

In the Elimination, Great Britain’s Laura Trott won the final showdown with Russian Evgenia Romanyuta.  Whitten regained some ground with a strong ride that vaulted her into a tie for third with American Sarah Hammer.  Both have 21 points to the 11 of Trott and Edmondson.

"I got off to a bit of a rocky start," admitted Whitten.  "The flying lap was equivalent to what I did in London (in February), but I was hoping for a little bit better legs in the Points Race.  So I was frustrated with that, but I think things were coming around in the Elimination and I'm tied for third.  A bit of a spread to the lead, but so many things can happen on Day Two, and that's still a good position to be in."

"I've made huge gains in the Individual Pursuit this year - I'm doing the IP on Sunday - so I'm excited about that event.  I had some good 500's in LA [Los Angeles in training] as well, so I think Day 2 is going to be good."

Whitten also agreed that she has become the marked rider, after two golds and a silver in the three years the Omnium has been run:  "It's something I've had to learn - how to race when I'm marked.  It's not conducive to my style of racing, so it's something I have to work on.  Sometimes it's frustrating that even when I'm not leading the Omnium, I'm still the one that's marked.  But that's the way it is, so I have to expect it and just learn how to race against it.