Mid Island Cup, Race #4, May 13th, on the Boxwood Circuit in Nanaimo BC

Mothers' Day was wonderfully sunny and the three performance category races went off without a hitch. One really disappointing thing was the absence of most of the youth riders. They had possibly been given the word - "You stay around for our Mothers' Day celebration or else...!"

The C started off quite slowly and the pace didn't change much throughout the race. It was obvious that the result would come down to a sprint finish and, sure enough, as the bunch came round the final bend, about three hundred metres from the line, the pace picked up. James Grant, Cycle U won the sprint from MIVA's Brodie Hay and Triple Shot's Jen Ericksen. It was one of the few races the club has held where there were more women than me.

The B event was considerably faster than the C with constant attacks. The strong wind worked against breakaways so the pack regrouped repeatedly. The starters included a mix of older,  experienced riders a couple of much younger competitors and a token woman. Soon after the start, Andrew Grant, Cycle U, and Iain Hay, MIVA, gained about 5 seconds but were soon brought back. On Lap 10, Menno Jonsma, MIVA, was joined by Hay and Malcolm Faulkner, O2, but again, they were soon caught. .On lap 20,  Andrew Grant crashed and retired. Steve Grant, who had stopped to check on his son, was given a free lap and rejoined the group. Mark Wieler, Arrowsmith, also abandoned about this time. Iain  tried once more to cruise off the front but was soon back in the fold. As in the B race, the result came down to a bunch finish, with crafty Iain Hay handily beating Faulkner, with Menno Jonsma placing third. 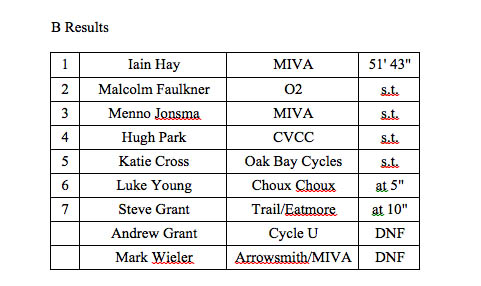 The A event was the most exciting, with nineteen starters, including a couple of the top provincial riders. Right from the start, the pace was high  and within a couple of laps, there were constant attacks. The high speed resulted in a few of the less fit riders getting dropped. On lap three Mike Korb, Russ Hayes, and Jeff Sparling, Pro City Racing, had opened a small gap and within a lap, they were joined by Hugh Trenchard, Dr. Walker. This trio contained three of the strongest riders and they got down to business, increasing their advantage by about five seconds a lap. With eleven laps left, Ian Smith, MIVA, and Alex Hui, Pro City Racing, formed a chase group and for the next five laps attempted to reduce the break's advantage but they were eventually caught by the pack. Then Raphael Lalumiere, Russ Hays/Accent Inns, made a lone attempt to ride away from the pack, and with one lap to go, Josh Erickson, Pro City Racing also left the pack. The break had almost lapped the bunch and took the top three places, with Sparling first, Korb second and Trenchard third. The bunch sprint for fourth place was taken by Geordie Morrison, Pro City Racing from Ian Smith, MIVA, and Ryan Clarke, Pro City Racing. On a point of interest, among the starters were Normon Thibault and wife Wendy Simms who had taken time out from looking after the kids. 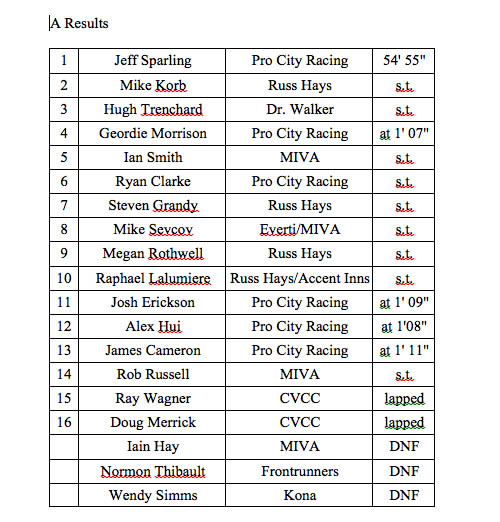 Thanks to the MIVA volunteers for course set up, registration and take down.