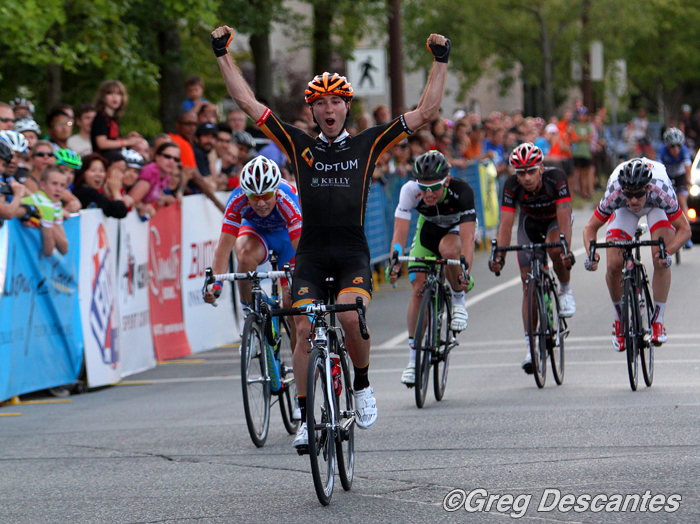 He was second in Friday’s MK Delta Lands Criterium and Saturday’s Brenco Criterium, and third in Sunday’s White Spot Delta Road Race. However, Anderson wasn’t satisfied with a “pretty good” showing, in fact, the North Vancouver native was visibly disappointed with his placing on Sunday.

Fast forward to Tuesday night and with a huge crowd cheering him on, Anderson wouldn’t be denied as a sprint to the finish gave him first place in the UBC Grand Prix over Germany’s Florenz Knauer (Team Baier Landshut) and Michael Schweizer (NSP Ghost / Team Germany) in one hour, three minutes and 35 seconds..

“I didn’t want to get second or third tonight, I wanted to win,” an exhilarated Anderson said afterward. “I was a little nervous in the end, but it worked out well for me tonight.”

Despite the fact that he was alone in a format that saw Anderson on his own in the top six, he added that it was his fellow Optum p/b Kelly Benefit Strategies that helped get him there. “When we came back on the group, my team was a huge help and their role was really crucial tonight. They got me right back to the front and I waited for the battle with a few laps to go.”

“He’s got so much experience, it’s nice to have him on my side,” Anderson said of Saturday’s Brenco Criterium winner.

“It wasn’t a win, but it’’s very good, I’m so happy to get second,” said Knauer. “In the second corner of the course, I had a few problems and ended up with a bad position, but it turned out okay.”
NSP Ghost / Team Germany’s Schweizer, who’s the only member from his team attending BC Superweek, finished a close third behind Anderson and Knauer.