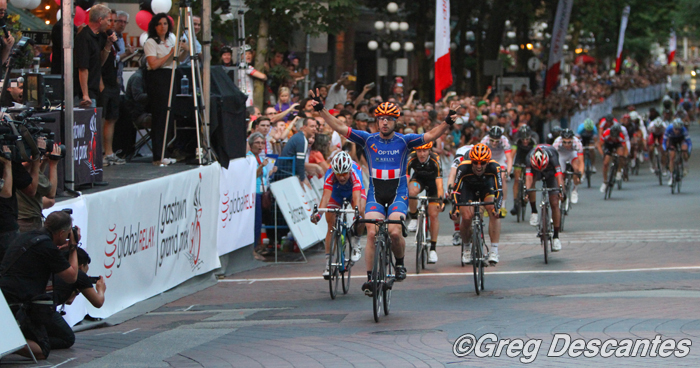 A huge crowd created a buzz that continued to build as the men did 50-laps of a 1.2-kilometer circuit in downtown Vancouver, racing over the same cobblestones as cycling greats Lance Armstrong, Alex Stieda and Canadian Olympians like Brian Walton.

The win is Hanson’s second of B.C. Superweek after claiming the Brenco Criterium on Saturday and he’s quick to credit his teammates for the $15,000 cheque he gets to take home.

“It really was an Optum team effort the whole day, we kept it controlled and we wanted it to be a sprint,” Hanson said. “We had a lot of confidence that Eric and I could have a really good finish and I’m just really happy to finish for the team, the guys were amazing for us.”

“We were a little disorganized at the top of the course, but then Ryan Anderson did a really good job of getting us organized and back up to speed,” continued Hanson. “Eric (Young) decided to take the front just before the second-to-last corner and just keep the pace really high and that allowed for me to get a really good sprint for the finish.”

“We’re not greedy about it, we’re just happy that we got a win and along with second place too,” Hanson added. “We’re happy to defend Gastown and win it again, it’s a great race.”

In second place, Eric Young, also of Optum p/b Kelly Benefit Strategies, was just a split second behind Hanson in the final sprint to the finish line. He noted that they had a distinct game plan heading into the final few laps.

“We were just planning for me to go out on the last corner, but felt the surge coming on the back stretch so I went a little bit earlier and just soft pedalled it through the last straightaway and then onto the last corner just put my head down and gave it everything I had,” Young said. “I knew Ken was right there and no one is going to beat him to the line, so I gave it everything I could to give him the best chance out of that corner and I was able to get second, which is really the icing on the cake for us.” 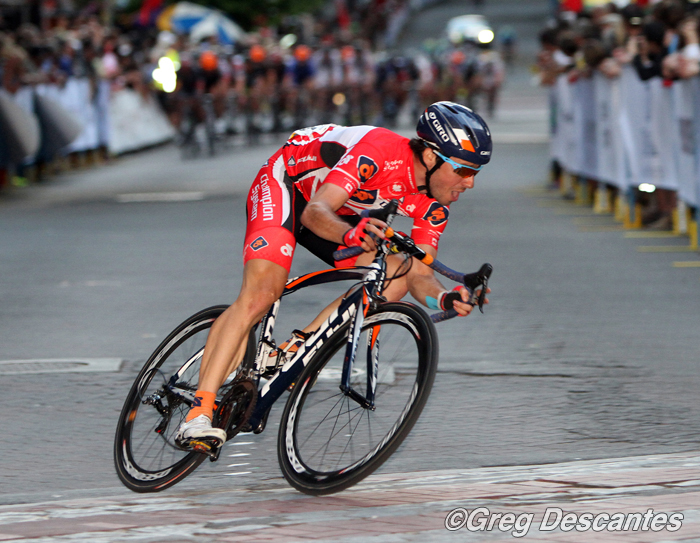 One of the underlying stories of this year’s Global Relay Gastown Grand Prix is that of Zach Bell, the 2013 Canadian Elite Men's National Road Race champion and former Canadian Olympian. The 30-year-old broke away from the field with just about a quarter of the 50 lap, 60 kilometre race to go and when it looked like Bell might come away with the win, he was caught by Team Optum p/b Kelly Benefit Strategies, which had six riders in the race. 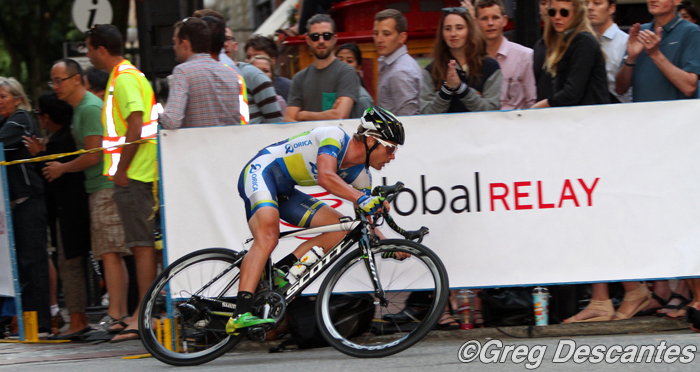 “We knew we didn’t want to catch Zach too early and Christian (Meier) was up there earlier as well,” Young explained. “If you catch them too early and kind of blow some of your guys, then you’re left a little stranded, so we knew we had to just feather it, and that’s exactly what we did. Once we caught Zach, then it was about managing the rest of the field and keeping everyone in check for the last lap.”

As for Bell, he chased down ORICA-GreenEDGE rider Christian Meier to open a commanding lead on the pack.

“I saw him go and I was keeping an eye on the board,” an exhausted Bell said. “It looked like the Optum guys were a little bit under pressure and it was worth the gamble. The one mistake I did make was that I thought it was seven to go when I went, but it was actually something like twelve.”

“Hats off to the Optum guys, I’ve ridden with that team before,” Bell added. “I have all the respect in the world for those guys, they are the greatest guys and it’s awesome to see them take home another one.”

Germany’s Florenz Knauer was third for the second straight B.C. Superweek event after finishing in the same spot during Tuesday’s UBC Grand Prix. Knauer made the overseas trip to race with Team Baier Lanshut, which as a team, now has three podiums as part of B.C. Superweek. 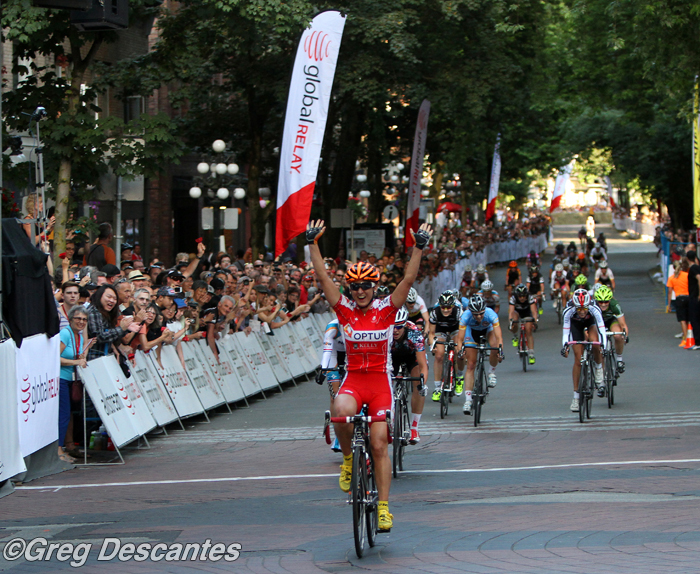 “It was definitely a very aggressive race, Team NOW and Novartis for MS has eight riders here and they definitely used their full strength,” said a beaming Kirchmann after crossing the finish line. “Luckily I have an amazing team behind me and they covered attack after attack.”

Kirchmann’s Team Optum p/b Kelly Benefit Strategies was down a lead out rider with three laps to go, which caused some anxious moments, but they were able to persevere for her to get the win and claim the $8,000 top prize, which is the largest for a women’s criterium in North America.

“I was a little bit worried because one of our lead out rider’s derailleur kind of exploded, but then another teammate was able to string it out with two to go,” Kirchmann explained. “I just sort of drifted wheels for the last lap and was able to put in a good sprint at the end.”

“I have to give a huge thanks to my teammates Denise (Ramsden), Grace (Alexander), and Amber (Gaffney),” Kirchmann added. “When you have a domestique helping out, it means that when other teams start talking, they can cover those attacks so I can sit out of the way and do the least amount of work possible, so they make the sprinters job a lot easier.”

The win is Kirchmann’s third straight victory after winning the UBC Grand Prix on Tuesday and the Delta Road Race on Sunday.

“We’ve had such an amazing time so far at BC Superweek,” Kirchmann expressed. “I really want to say a huge thanks to all the volunteers, all the sponsors, all the fans, it’s just been incredible.”

Gillian Carleton, who won a bronze medal for Canada in the team pursuit with Tara Whitten and Jasmin Glaesser at the 2012 Summer Olympics, was coming off a disappointing UBC Grand Prix on Tuesday when she pushed it with half a lap to go and fell into the hay bales, but the Victoria native redeemed herself with a solid race and second place finish at the Global Relay Gastown Grand Prix.

“I kind of stayed near the back for most of the race because I hurt my hand pretty bad last night and didn’t want to push it too much,” Carleton said. “Leah just had such a great lead that when I saw her go around that last corner with so much speed, I couldn’t match it.”

The 24-year-old is in her first road season as professional rider was thrilled to make the podium in her home province after celebrating her first UCI victory in May, taking the win in Stage 5 of the inaugural Tour Languedoc Roussillon in the south of France.

“It’s always a pleasure racing here in B.C. and the Global Relay Gastown Grand Prix is probably one of my favourite events,” Carlton said smiling. “There are so many crowds here, I can’t thank everyone enough.”

The podium at B.C. Superweek is becoming familiar real estate to Robin Farina (NOW and Novartis for MS) as well. After a first place finish in Saturday’s Brenco Criterium and a third place finish in Sunday’s White Spot | Delta Road Race, Farina was third in the sprint at the Gastown Grand Prix.

“Our team’s goal was to keep this thing fast and furious, knowing that we don’t have a pure sprinter, but we have a couple girls who can jump,” said Farina. “Our goal was to just be on the offensive all night - make Optum Kelly Benefit Strategies work and make Vanderkitten work.”

“At the end we got super fast, Maura Kinsella attacked with one to go to make it really fast and that allowed me to sit on Leah, but she’s a very quick sprinter and all I did was just go for it,” Farina continued. “Gillian has a fantastic jump, and we just got beat by two fabulous racers.”