May 15/14 8:43 am - Interview with Tony Girardin about making Marinoni: Fire in the Frame

Giuseppi Marinoni is legendary in the Canadian bicycle world, known for the fine steel frames from his shop in Montreal that have borne his name over the past four decades.  More recently, he made the news for setting a new hour record for his age group (75-plus), in the Fall of 2012.  However, very few of us have actually had a chance to know the man himself.  This has now been rectified with the recent release of the documentary Marinoni:  The Fire in the Frame, at the HotDocs Festival in Toronto.

Note:  Below this review we have a report by Len Ramsay, who raced with Giuseppi Marinoni

Tony Girardin, a Montreal-based film maker, chose Marinoni as the subject for his full length feature after visiting the frame builder in his shop.  Girardin is a self-taught film maker, having studied business at university, but always interested in making videos, working his way up from wedding videos to corporate videos and eventually documentaries.  Prior to Marinoni he made Hoppy the Deer, which was sold to CBC and shown on numerous networks.

"Many years ago I started collecting vintage steel bicycles, and one day I walked into the basement of a shop in my town and they had all these old steel bicycles, and the one that caught my eye was a Marinoni.  I didn't know much about it, but when I saw it I thought 'Oh, this is a nice bike, there's something special about it'."

"When I researched it online I found out that they were being built in Montreal, so I went to visit him.  The first time I saw him, I thought 'Yeah, I want to make a film about you'.  At first he said no; it took about three years, but eventually I convinced him, and he agreed to participate." 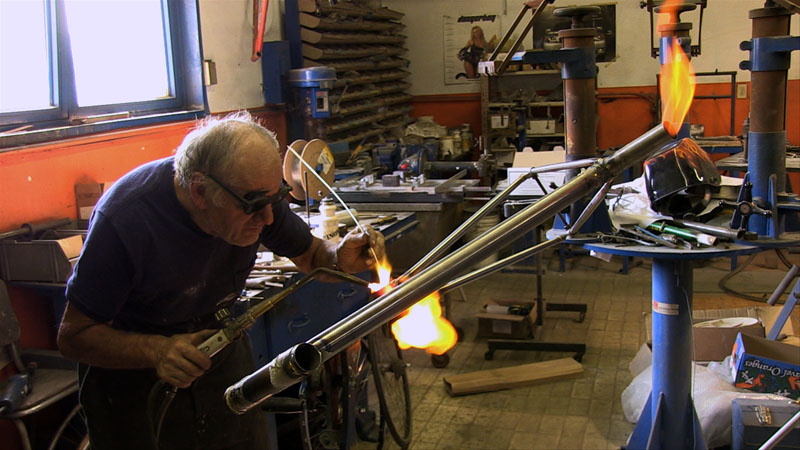 The movie opens with Girardin talking to Marinoni while the frame builder brazes a frame in his shop and, initially, Marinoni is argumentative and dismissive, saying that the filming is too stressful.

"The premise under which he agreed to the film was that he was doing this hour record attempt, so in his mind it was more a film about his record than a film about his life.  But in my mind it was the whole package.  My goal was to capture as much of his life as possible, and turn that into a life story.  That scene in the workshop was only the first or second day of filming." 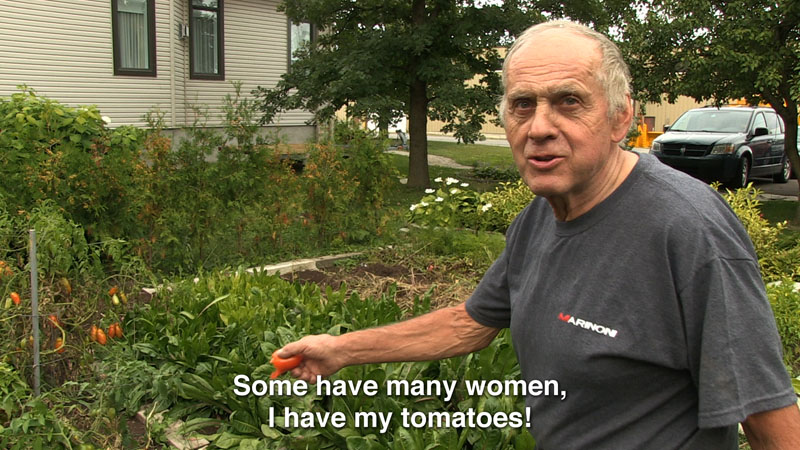 Slowly, Marinoni opens up, revealing his fears about the record attempt - "I could die!" he says dramatically more than once, as he pushes himself on training rides in preparation for the record ride.  He allows us to see the chickens he keeps, the tomatoes he grows and the great passion he has foraging for wild mushrooms.

Through old documents and interviews with family, friends and staff, we learn about a young Italian bike racer, who grew up through the Second World War, became an Italian racer of some renown, and was brought to Montreal in the 1960s by a local promoter to compete in some races.  Eventually, Marinoni married and settled in Canada, trying his hand at a number of jobs before returning to Italy to train as a frame builder under the guidance of Mario Rossin, then opening his own shop in Montreal, in 1974.  At times combative and at others shy, this is a fascinating look at a craftsman who still works in the traditional and time honoured trade of framebuilder. 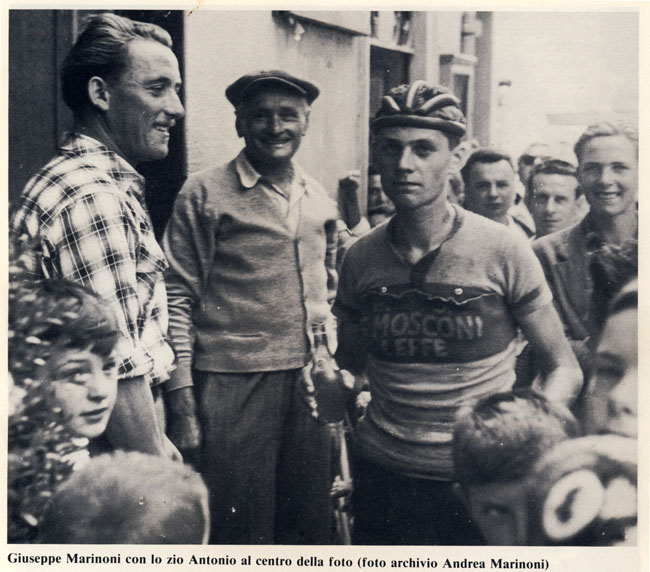 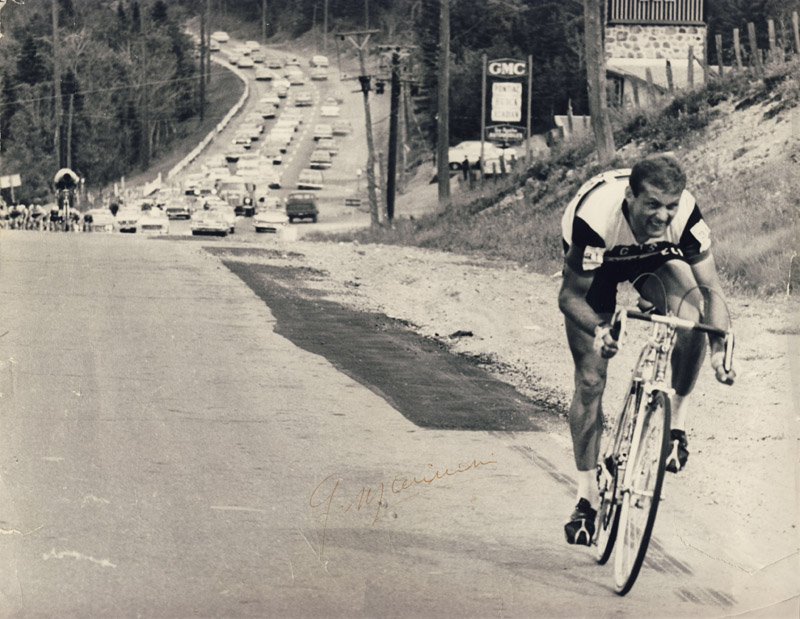 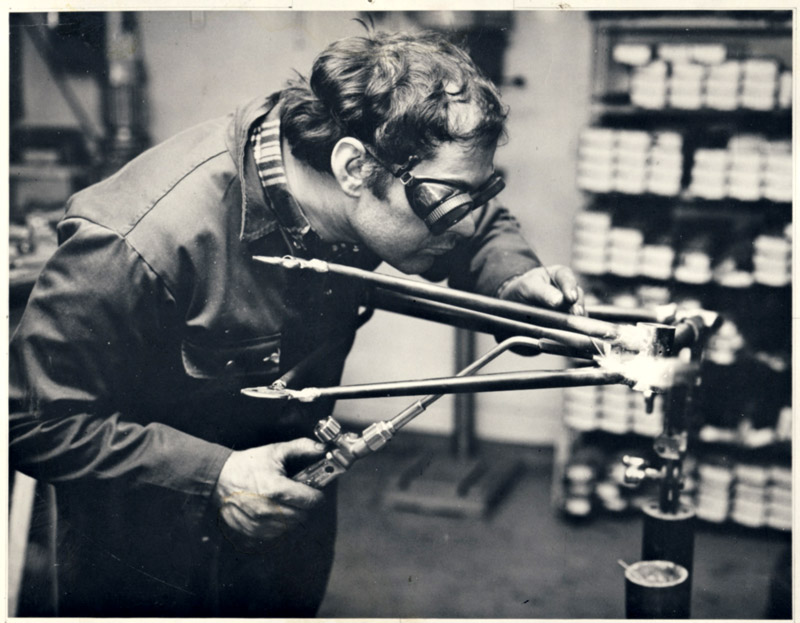 However, this is not a film about Marinoni the framebuilder.  This is Marinoni the man who wants to prove something to himself and, equally important, honour the Canadian rider whom he considers one of the greatest in our history - Jocelyn Lovell.

If you came into cycling less than 30 years ago, there is a good chance that you have never heard Lovell's name.  He was a polymath of Canadian cycling, winning nationally and internationally on both the road and track, in distances from 200 metres to road races of more than 100 kilometres.  In 1974, he won five national titles in the same year, ranging from the Sprint to the Road Race, as well as winning multiple Commonwealth and Pan Am medals during his career.  He missed out on what was his great chance for Olympic glory due to the boycott of the 1980 Moscow Games.  On August 4, 1983, Lovell was hit by a dump truck while on a training ride, suffering injuries which made him a quadriplegic, one of the greatest tragedies in Canadian cycling. 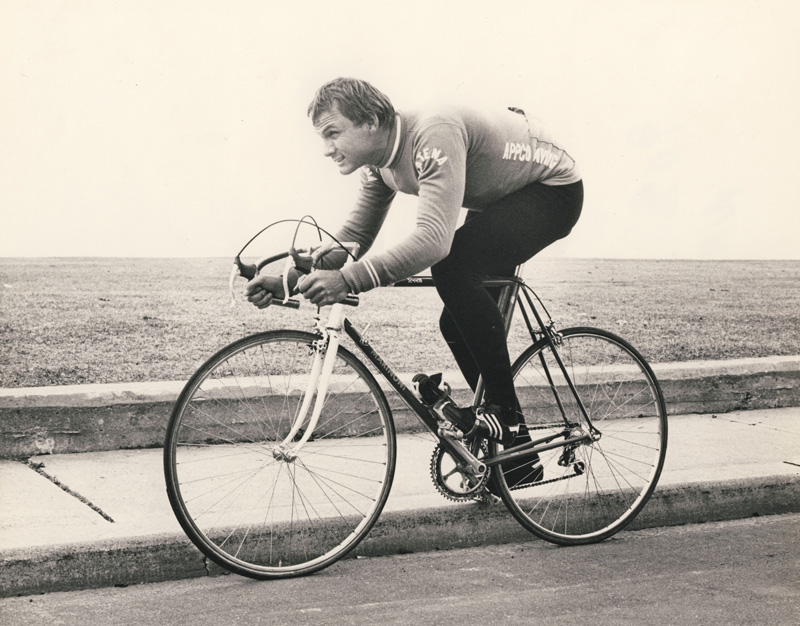 Above and below, Jocelyn Lovell - Courtesy Tony Girardin 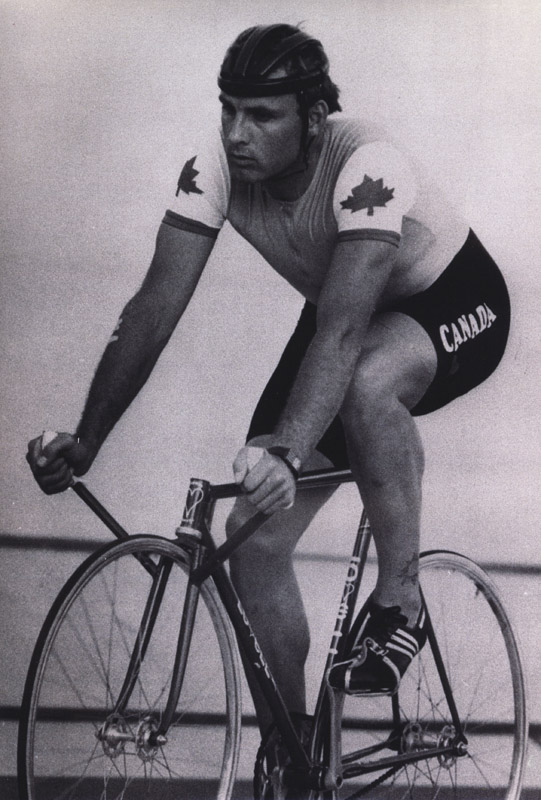 Marinoni built Lovell's Commonwealth Games record setting track bike, and still had it in his possession, and decided that he would use this bike in his record attempt.  Girardin had never heard of Lovell, but incorporates him skillfully into the story, traveling to Mississauga to interview Jocelyn and including archival material.

"There's a scene where he's [Marinoni] going through his archives and his photo albums ... I had never heard of Jocelyn Lovell until that point.  He told me that this photo [of Lovell] is the most important photo of all the photos.  I researched him [Lovell] and decided it was important to visit him." 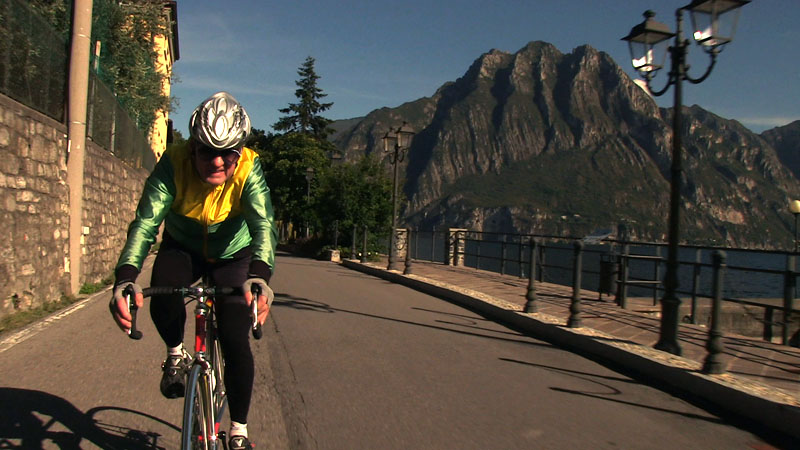 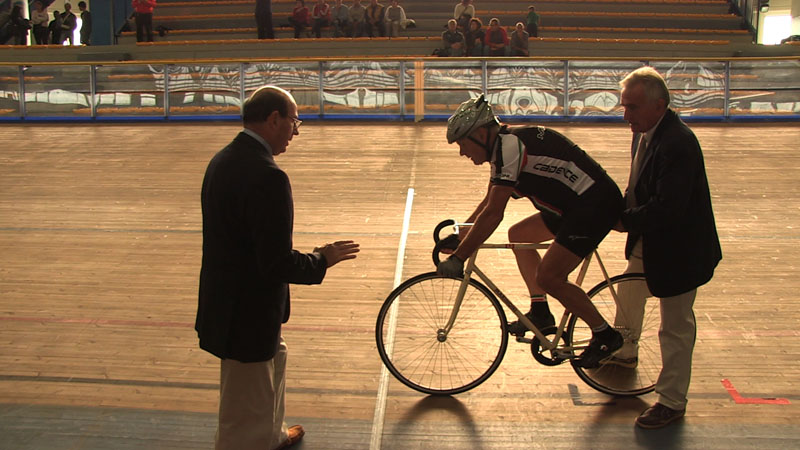 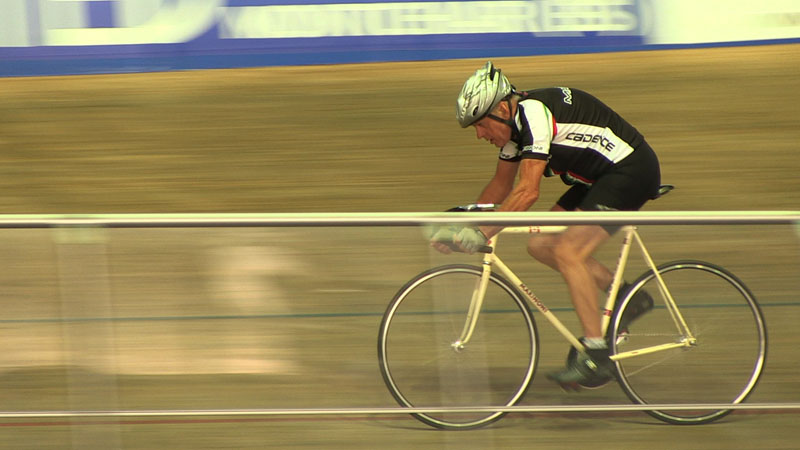 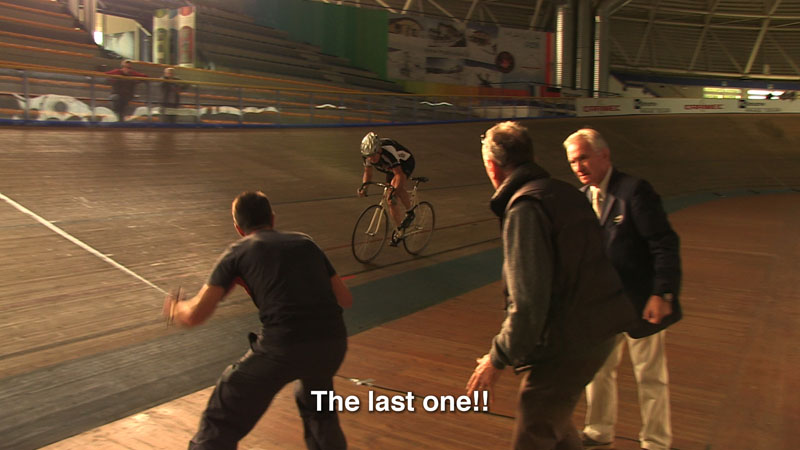 The movie follows Marinoni to Italy through the build up to the ultimately successful record ride, and we see a different man once he arrives back in his birth country, and in his hometown, where Girardin films him interacting with relatives and visiting local landmarks.  The actual record ride itself takes up a relatively short segment of the film - he obliterates the old record, covering 35.728 kilometres on the Montichiari track - and finishes up with a visit by Marinoni to Mississauga to visit Jocelyn Lovell; incredibly, the first time the two come face-to-face since Lovell's accident.

We get to see two great cyclists from half a century ago, who clearly have tremendous respect for each other, reminisce and, in a moment that clearly overwhelms Marinoni, see Lovell present his friend with the framed collection of five national title medals from 1974.

I asked Tony Girardin how Marinoni reacted to the film.  "Well, it was definitely something I was nervous about.  I didn't want to show him the film [before it was complete] out of integrity for the project, and I didn't want to have him watch it alone at home.  So he saw it in a theatrical setting with an audience at the first [HotDocs] showing, and after he saw it I went up to him and asked 'what do you think of this film?'  He said 'Now Tony, we're friends forever.  I can't believe you went to all this effort to tell this story about me, why me?' "

"For me, the most important thing about this film was to keep it honest and real, to not try to chip away too many of the edges or whitewash him." 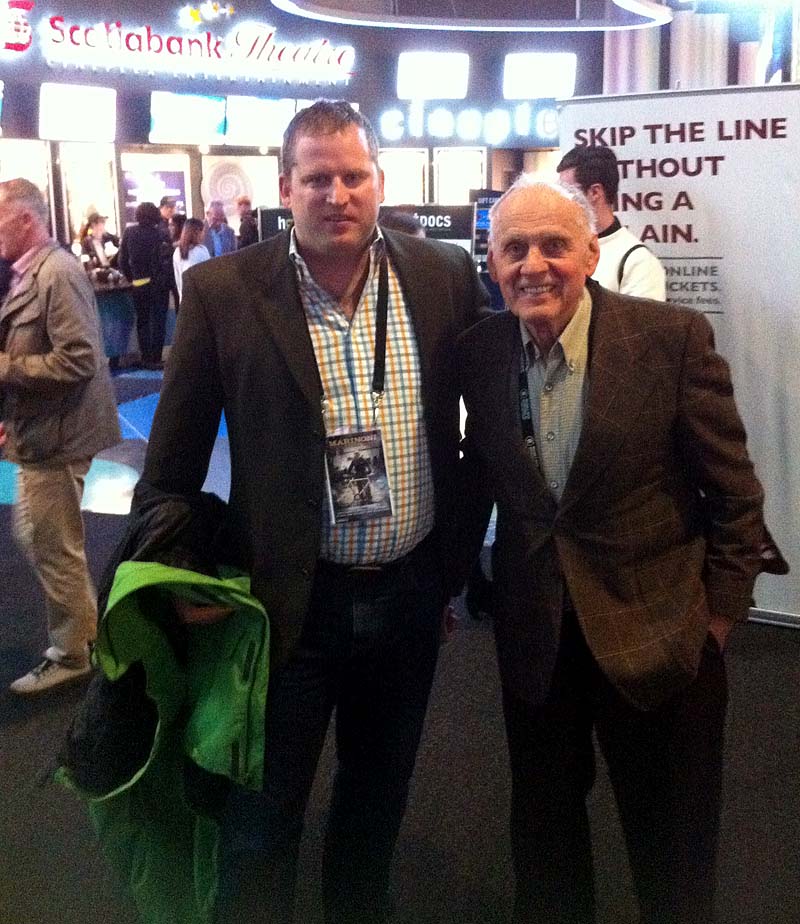 Tony Girardin and Giuseppi Marinoni at the HotDocs Festival in Toronto

Girardin has accomplished his task admirably, giving us a fascinating portrait of a man who has a passion not just for cycling, but for life.

Marinoni:  Fire in the Frame finished sixth out of 200 films in viewer balloting at HotDocs, and has now been accepted to the Vancouver International Film Festival (September 26th - October 11th).  Girardin is still working on distribution plans, but we can expect to see it more widely available at some point.  Girardin said that he would love to be able to do a limited run of theatrical viewings across Canada in major centres.  He also says that he hasn't finished with the editing, and plans to add additional archival material that he has come across.

Giuseppe Marinoni was in Toronto for the first screening of the 90 minute film "Marinoni, The Fire in the Frame" by Tony Girardin, at the Royal Cinema on Friday night (April 25th). HotDocs is sponsored by Scotiabank and the evening was co-sponsored by the Midweek Cycling Club.

Also there was Gaetan Hart, the subject of an 11 minute short on this Canadian champion boxer who, at 59, continues to fight, although he killed Cleveland Denny in the ring in 1980 and that haunts him still. "I'm a boxer, not a killer. The man who died could have been me." The audience cringed as we saw closeups of Gaetan, almost 60 years old, taking blows to the face. It was like Rocky but it was real. And Gaetan was there in front of us on the stage taking questions after the film.

The twin screenings were powerful portraits of aging athletes that, by their juxtaposition, were each more powerful. Marinoni has achieved a cult reverence that was palpable in the crowd at the theatre on College Street. He’s a 75 year old who came to Canada in the 1960s and rode for Corneli in Montreal. He's presented as dominant, even unbeatable. I remember him a little differently, as a great champion and fierce competitor on the Canadian scene in the 1960s.

I raced with him on Hamilton Mountain in 1969. I was a Canadian Junior Champion and had already ridden and won the Junior race that day. We were riding the fast flats on top of the escarpment on the last of 11 laps of a circuit that included a pretty tough climb, and five of us were away. Marinoni would not pull and I confronted him about it. He made some sounds, shook his head, looked me in the eyes in a way I will never forget. Then he looked down and pleaded. He grasped his thigh as if to indicate that he had cramps. This formidable man taught me a lesson that day.

Of course we all faked each other out once the break was well away and safe from the group. We all told the same lies, postured and posed in the same ways. But he was better at it. The four of us let him ride and ... he won the final sprint!

Jocelyn Lovell, a great champion by any standard speaks in the film of Marinoni and says "those eyes..." in trying to describe Marinoni's presence and passion. He also says "If it's not cycling, it's insane", which for me rings of the intense single minded devotion that played on the screen in both Hart and Tony Girardin's film. The difference for me is that Marinoni is flourishing. He tends his chickens, hunts for mushrooms and shows great joy at their discovery. He eats tomatoes and cajoles with his buddies. He is very healthy and full human being.

Many of us these days have heard of Jocelyn Lovell, know some of his antics and  triumphs, and know he was tragically run over by a dump truck on Britannia road just west of Trafalgar in 1983. I remember Jocelyn singing "Rule Britannia, Marmelade and Jam" at the top of his lungs on training rides in the 60s with Joe Jones, Jan Lazeron, Horst Steuwe and Peer Lovell. Jocelyn in the audience was apparently touched by this moment in history, when one of his tribe features on the screen in a full length film, and so was I.

Lovell was a far greater rider than Marinoni and yet today Marinoni is able to contest the Hour record, and his bikes have become ultra-cool. Marinoni was fortunate enough to age very well. There was a flock of admirers around Marinoni. Jocelyn and I had lots of time for our standard jokes together. I felt sad for him. And I felt sad for Gaetan Hart.