In the month of June, Montreal-based rider David Pecuch set a kilometre record that would surpass the annual figure for most of us, a staggering 7565.3 kilometres in 30 days. Pecuch is the Sales Technology Manager for Specialized Canada, and he accomplished the feat - recorded as part of the online Strava Monthly Training Series (MTS) - while working full time. We spoke to Dave about his mega-mileage month.

Canadian Cyclist: What motivated you to make the attempt?

Dave Pecuch: I've been entering quite a few of the Strava challenges for about 18 months now. Mainly it was just for fun but I was always able to be in the top 50 or so just by doing my regular daily rides (commute to work, lunchtime ride, commute from work) plus more mileage on the weekends. About half way through the August 2013 challenge I saw that I was top 5 so I decided to try to win. With 4 days left I had close to a 600km lead. Then on August 28th during our lunchtime ride I crashed and broke my collarbone. I ended up finishing 2nd by less than 3 km. I had a operation on August 31st and basically stop cycling until this spring.

I entered the April challenge (for fun) and finished 59th. It's still very cold in Montreal in April so I wasn't planning on trying to win. I entered the May challenge as well. On May 20th I had a second operation (to remove the plate they put in when I broke my collarbone). I was unable to ride from May 20-30 because of the operation but still finished 119th overall. On May 31st I went for a long ride and felt very good so decided to try to win the June challenge.

My biggest motivation was losing the August 2013 challenge by less than 3 km. I did a total of 78 rides during the month, of which approximately 70 of them were solo. My average speed for the month was 30.0 kph.

CC: What are your big mileage days?

CC: Was a record your goal or were you just pushing yourself

DP: I was unaware of any record but imagine if there is such a record, 7565 km might be pretty close to it. My goal was to try to win by pushing myself to the limit. My original goal was 6000 km. About 10 days into the challenge I was in first place but the 2nd place guy wasn't backing off so I readjusted my goal to 7000 km. With about a week left I saw that 7000 km might not be enough so I did a mega final 8 days of 2482 km.

CC: Will you continue?

DP:: I'm going to take a few weeks off the bike in July but plan on entering the August and September challenges but only for fun. The June 2013 was probably a once in a life time kilometre month for me. I achieved this while working full-time. I was up every day between 3 and 4 am, did a 100km-160km ride before work, a 30-35km ride at lunch and a 50-100km ride after work. A couple of days in a row I rode 200+ km in the pouring rain.

One morning I almost ran into some crazy naked guy walking along the bike path. I also had a can of spray paint thrown at me by a gang of graffiti artists. But I also saw many great sunrises and sunsets. During the month I also spent very little time with my wife and kids (who were incredibly supportive and understanding).

So I doubt I will ever attempt this kind of mileage in a month again but felt very satisfied with what I achieved, knowing that there a very few cyclists on this planet who have done more than 7565 km in a month. 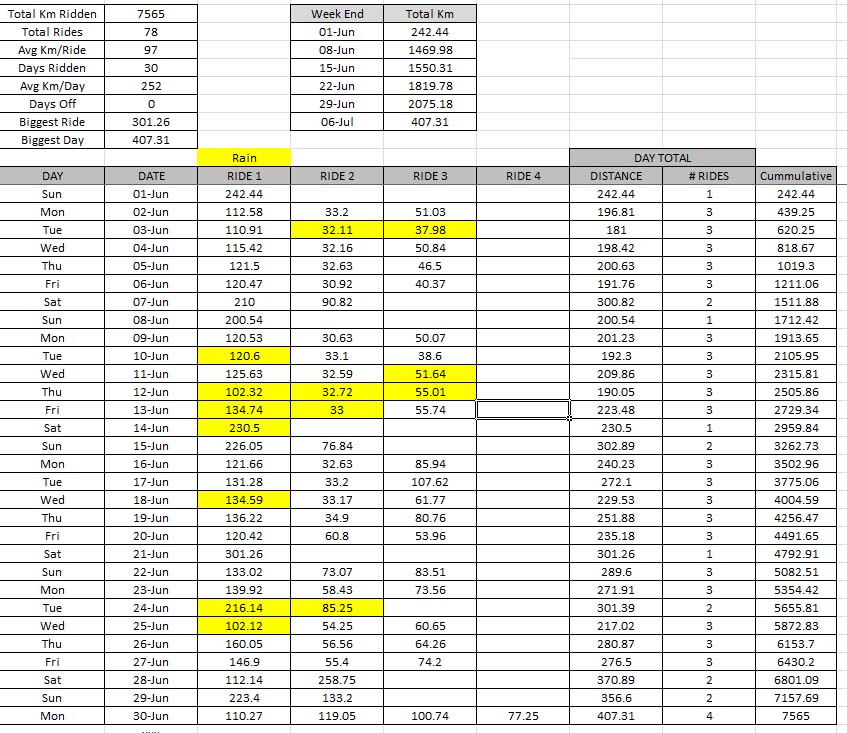