Entering this World Cup race, Canada had been on the podium in the last six international women's team pursuit races, and they managed to continue the streak adding a seventh podium to the tally.

"In the qualifiers, we were on to a good ride; we were on schedule. Just before the three-kilometre mark, Kirsti touched on the back of Allison's wheel and crashed. Fortunately, Jasmin was able to dodge her and the team continued on to qualify in third. Ultimately, as close as Great Britain, Australia and we are to each other, all you need is to qualify top three," said Craig Griffin, women's track endurance coach at Cycling Canada. He went on to add "Kirsti was a bit bruised up, but we made the decision to keep her in the line-up for the semi-finals." 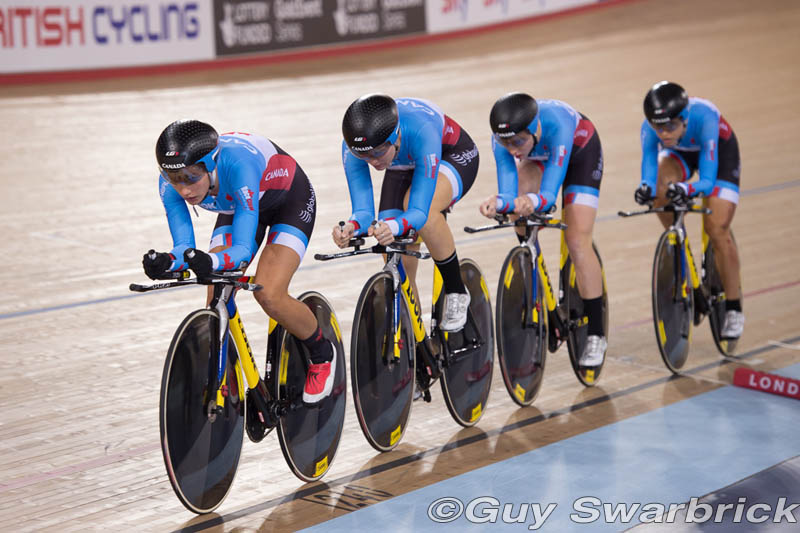 The team comprised of Jasmin Glaesser (Coquitlam, BC), Stephanie Roorda (Vancouver, BC), Allison Beveridge (Calgary, AB) and Kirsti Lay (Calgary, AB) raced a tough battle in the semi-final race against Australia, lowering by two seconds their qualifying time, but were ultimately unable to bridge the deficit created by the quick Australian start.

Griffin was nevertheless pleased with the ride, Canada's best time at sea-level. "The semi-final was a good ride - I can't say it was our best ride. The 4:26 we did was actually the best time we've posted at sea-level, so I feel pretty good about that. I gave Kirsti the same workload, so I didn't have to change the strategy [as a result of the crash]. The bottom line is that we needed to execute better, from a technical standpoint. We just needed a greater focus in that semi-final." 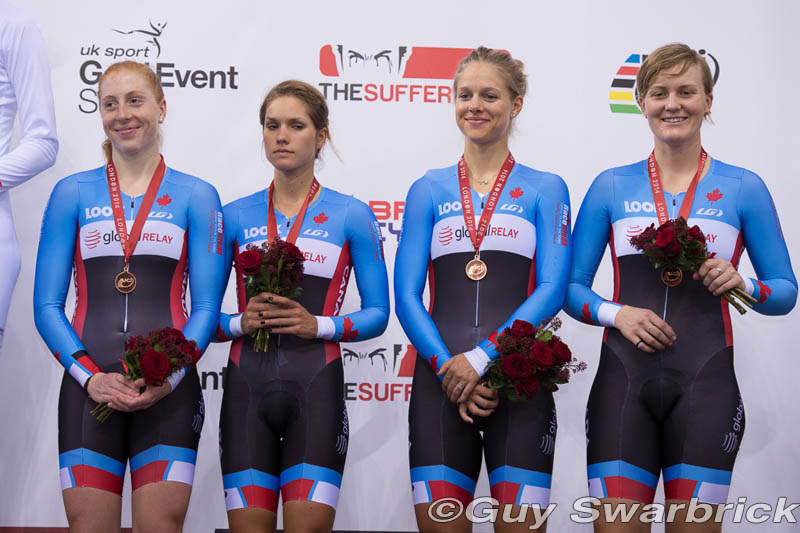 In the race for the bronze medal, Canada faced the rising team from China, who posted a time of 4:30.032 in the first round to qualify for the bronze medal duel. Determined to climb on the podium, the Canadians wasted no time in taking the lead, and never looked back as they caught the Chinese with 400m to go, automatically ending the race.

"In the final [for the bronze medal], we slowly got the feel of things. We knew we had a bit of a cushion over China, so there was no stress. We had to go out and put a clean ride. The girls rode with very nice splits," continued Griffin.

The coach was pleased to see that new changes helped the team, and will continue to help the team for the long-term. "For me, it was a good event, We totally changed our strategy with our line-up over the last month between the two World Cups. We realize we have to get better, so we are trying some new things. For the most part, I think the changes we've made turned good results, and it will pay dividends in the long run."

As expected, the local Great Britain riders took the gold medal against the Australian team. The Brits remain undefeated in international competition since the 2012 Olympic Games, winning every World Cup and World Championship race in which they taken part. Australia put up a good fight in the gold medal showdown, but their efforts proved unsuccessful, having to settle for the silver medal.

The pressure increases on the rest of the world to dislodge the Brits from the top step of the podium, and Griffin wants Canada to be that team. "We are now expected to be on the podium. Our goal is always to be on top of the podium, and we aren't too far off. We are a very young team, and the most important thing for me is that we have new talent coming into the team with Kirsti and Allison. Both were not part of the program prior to this Olympic cycle. We have Laura [Brown] and Gillian [Carleton] that are home. At some point, we will have a full contingent, and we are going to continue to push the envelope, and knock those guys off the podium at some point."