Optum Pro Cycling p/b Kelly Benefit Strategies completed one of their best weeks of racing in recent memory at New Mexico's Tour of the Gila with yet another stage win, this time coming from climbing ace Mike Woods in Sunday's notorious Gila Monster Road Race. Jasmin Glaesser completed an excellent week with a fourth place finish in the Gila Monster, taking home the Best Young Rider jersey in the process. Both Woods and Glaesser finished fourth on general classification, a few seconds from the podium. The men also took home the Team Classification and Sprint Classification for Eric Young. The teams combined for four stage wins at the 5-day race.

The men's team plan for the Gila Monster was to shake things up on the overall standings together, but a dangerous 30-man breakaway forming early in the stage caused a major tactical shift. 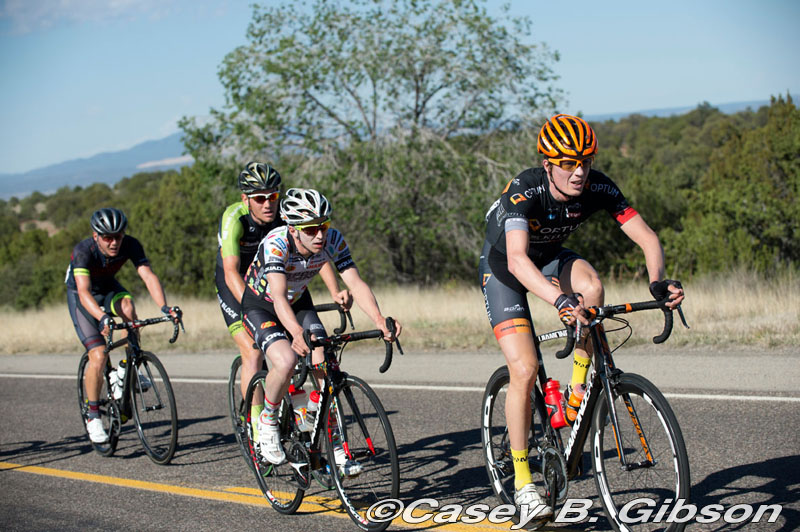 "Things did not go as planned on the Gila Monster," said Performance Director Jonas Carney. "We wanted to put several guys up the road and put pressure on the overall leaders. However, a massive and dangerous breakaway with numerous GC threats got away early, and we ended up with only one guy, Routley, in there. The second part of our plan was to set up Phil Gaimon to make a run at the GC, but Phil was not having a good day. It wasn't looking great for the team, but Routley's breakaway was caught before the toughest climb of the day. Woodsy capitalized on some great teamwork, was on great form, and saved the day by taking the stage win. Tom Zirbel and Phil fought tooth and nail all the way to the line, caught two Colombians with 1k to go, and saved our win in the team classification. Everything went wrong, and it still ended up being a good day - a testament to the grit of our athletes here at Gila." 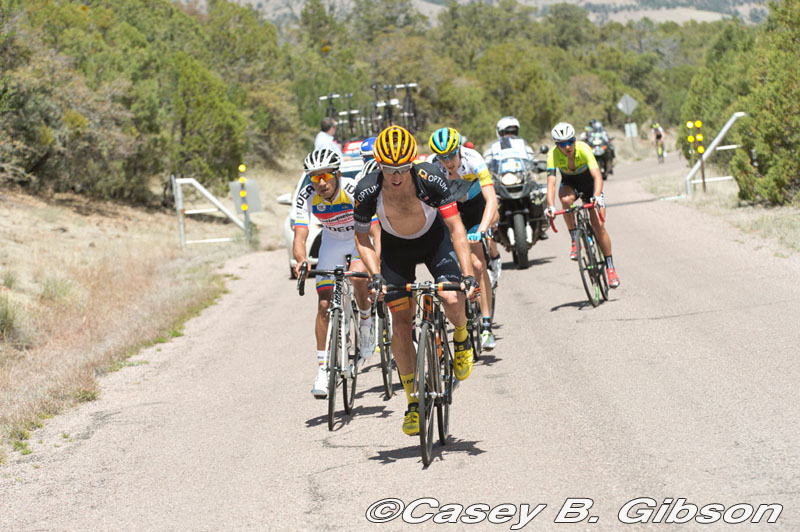 Woods said:  "After doing a recon ride with Pierrick Naud last week, I got pretty excited for the Gila Monster. I saw a number of opportunities to ride away solo, or, due to the uphill finish, winning if it came down to a sprint. The hills on this race definitely suit my skill set as a climber, so I tried to use them to isolate the overall leader, and get away individually. Unfortunately I was not able to get enough of a gap at the top of the climbs to get the win in the GC, so after the final climb, and after a discussion with Zirbel, I decided to save the legs for the rest of the race and target the stage win."

"The team was the reason I got the win today. Will Routley did a great job of getting into the first split of the day, taking the pressure off of the rest of the team having to work to close the gap. I got mixed up in a crash on the first climb, and Pierrick, Zirbel and Bjorn Selander made sure I made it back into the group without any issues. Young did a great job in positioning me into the first climb, and Guillaume Boivin made sure I was first wheel going into the Gila Monster, and gave me a great lead-out. Zirbel's pep talk going into the final climb of the day really helped me focus, and prepare for the final sprint. I have been having a great season so far, and the entire team - the staff, and the riders - has been responsible for these results."

Glaesser went on the attack early in the stage with her teammates in a final ploy to distance herself from "The Queen of the Gila", Mara Abbott, but the now five-time Gila champion would not be dislodged. The team set about attacking various intermediate sprint points and some subsequent time bonuses, and Glaesser had another solid climb on the road to Pinos Altos, finishing fourth on the stage. It was a strong and confidence-building week for the team, who head straight away to the first-ever women's stage race at the Tour of California, a 3-day affair in Lake Tahoe, and the women's time trial invitational at Big Bear Lake, where Glaesser and Alison Tetrick will compete.

"My team did a great job looking after me this week," commented Glaesser, "and helping me save as much energy as possible for today's final stage. I was really pleased at having the opportunity to be on the offense today by bridging up to a break at about the halfway point. I didn't have the chance to do too much specific prep going into this race, so I think that may have caught up with me on the final couple of climbs, but it's an encouraging place to be in for me this early in the season!"

"We had four different riders finish on the podium this week so I think that's a sign of how strong the team is riding right now. Having raced five hard days at altitude will certainly set everyone up to go into the Tour of California super fit. As for me, I'll be cheering for the team and hoping to have a good ride in the time trial in Big Bear a few days after the stage race."

In Saturday's criterium, Leah Kirchmann sprinted to a second place finish, while Eric Young finished third to help solidify his grip on the green sprinter's jersey.

The high point of the five days of racing undoubtedly came in stage two, with a double stage win for the men and women. Eric Young catapulted off of a perfectly executed team lead out to win his first UCI race of the year, and Annie Ewart did the impossible when she recovered from a hard crash on a dangerous descent, rejoined the peloton, immediately attacked it, and won the race solo, completely exhausted from her effort. It was the biggest win of the young Canadian's career.

Performance Director Patrick McCarty was proud of the team's hard work across the high-altitude, high temperature New Mexico courses, and saw several athletes maturing at their toughest stage race yet in 2015.

"Jasmin is maturing as a road racer, and GC rider - I think she showed this week that she will be able to win these races in the future. Brianna Walle continues to ride strong, and performed very well in the TT. Ariane Horbach's first ever UCI stage race went very well for her - she was able to help the team and stay at the front of the race. Annie Ewart had a huge win on stage two after a nasty crash on the descent, and Leah is showing her ever-growing talent by performing better and better in climbing stage races. When she comes into her true sprinting form, she will be very hard to beat."