Tuesday night's 45 lap criterium started off faster than usual, with the pack lapping at over 40 kph. Within 3 laps, Dr. Chris Cameron (MIVA) and Nick Kupiak (Boad St. Cycles) had opened up a 5 second gap, but this was quickly gobbled up and then Nick lit the afterburners and escaped again, this time taking Merville junior James Grant (TaG) with him. Seeing the probable start of a winning break, Janna Gillick (ATAC) and James' brother Mark set off in pursuit, followed by Peter. Mogg (MIVA).

Within a lap, they had established a clear lead and at the first prime it was James beating Nick and Mark to the line. The break then settled down to take 5 seconds per lap out of the bunch, where Patrick Burnham (MIVA) was doing the lion's share of the work with little help from the rest. The leaders were almost three quarters of a lap up on the peleton as they approached the second prime with Janna losing contact and Peter Mogg hanging on for dear life.

At the line, it was Mark, James and Justin in that order. Now the break split, with Mark Grant and Mr. Kupiak at the front, the James Grant, Justin Mark duo a hundred metres behind and Peter Mogg drifting back. On lap 25, the leaders finally caught the pack and the following lap, the second pair also bridged. Now thebunch was all together for the 3rd. prime at 29 laps. This was again won by James Grant, with Peter Mogg and Mark Grant challenging but unable to come around the TAG junior.

With just 14 laps to go, Janna Gillick and then junior, Ayden Houle, tried to stir things up but soon the pace eased somewhet just before the final prime with 3 laps to go. This was again won by James Grant, from brother Mark and peter Begg. The 4 riders who had remained a lap ahead of the rest now contested the finish.

Now Nick Kupiak, who had let the Grant brothers take the intermediate sprints, took a comfortable first, followed in by James and then Mark, with Justin in 4th place Since a break had lapped the main pack, the sprint for 5th. place on was at 2 laps before the leaders did their thing. In this consolation finish, Derek Johnson (MIVA) outsprinted Peter Mogg and Dr. Chris Cameron, with the remainder of the riders all finishing together.

Thanks to our marshals and course set-up individuals for a stirling job and to Dave Kenny for bringing your official a much-needed coffee. 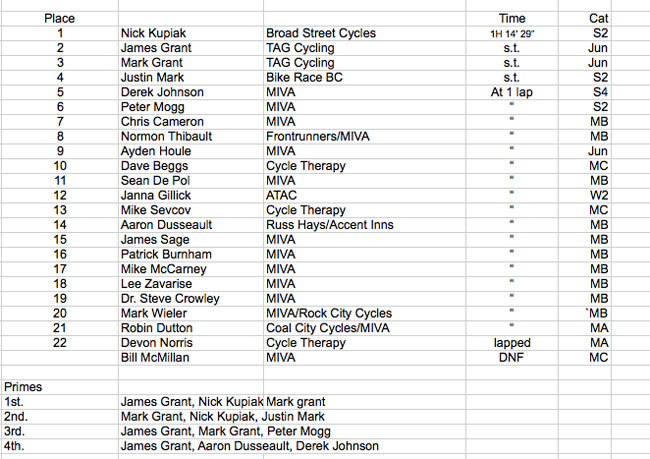