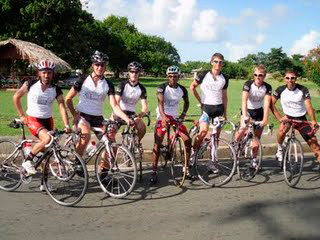 Canadian Jean-Michel Lachance sent the following report on racing the 2009 edition of the Tobago Cycling Classic with Team Barcode. Lachance finished ninth overall and the team won the Team Classification.

When the opportunity came to join Emile Abraham's team again this year for the 23rd Tobago Cycling Classic, I did not hesitate too long. This year, Jeffrey Charles and his team managed to present a very good field with 60 riders from Germany, Austria, UK, Canada, Guadeloupe, USA and many more, for a total of 14 different countries represented.

Emile has always put together a team for this event, which, by the way, was first organized by his father Tony Abraham before Jeff Charles took over the organization in 1993.

Our team for the event was named Team Barcode International, sponsored by Barcode, a local sports bar in Scarborough, Tobago. Roster included "ah we boy" Emile Abraham and Roger Smart from Trinidad and Tobago, myself, Daniele Defrancheschi and André Tremblay from Canada, plus Pete Williams and James Sampsons from UCI UK team Candi-TV.

Stage 1 - Carnbee time-trial
The race started early at 6:30 in the morning with the opening 12 kilometre time trial in Carnbee. German teammates for Sachsen Saxony outfit, Sascha Damrow, a former silver medalist in the pursuit at Junior's Worlds, and Julian Rammler, professional with Acqua Sapone, grabbed the first two places. Austrian national team rider Andreas Graf completed the podium. The good thing about racing in 40 degree heat is that the warm-up can be much lighter. With no time trial other equipment than clip-on bars, I surprised myself with a good ride, finishing only 0.8 seconds off the podium in fifth position. Team Barcode got a good start with Peter Williams and André Tremblay also placing 10th and 12th.

Stage 2 - Carnbee circuit race
In the afternoon, riders tackled the same circuit for a 120 kilometre road race. Attacks went from the start and after only two laps a break of about fifteen riders went up the road and by the third lap already had an advantage of over 2 minutes. Team Barcode did well, placing four riders (Emile Abraham, André Tremblay, Pete Williams and myself) in the move. The tempo, even tough not too fast, combined with the heat and the time trial in the morning made it an exhausting race. Attacks for the stage win only began in the last two laps and we always made sure we had someone in it or brought it back smoothly. The race then came down to a sprint finish with Emile Abraham finishing in sixth. Being the best represented team in the breakaway, we climbed up to first position in the team GC, with four potential riders for the overall win. With the top three finishers of the morning time trial missing the break, I was now sitting second overall, only 0.2 sec behind the new yellow jersey, Colombian Lisbon Quitero.  Results

Stage 3 – Whim circuit race
The second day was a harder one, with a five laps 100 kilometre circuit race with a three kilometre category 2 climb every lap. I was feeling pretty good, so I attacked a lot during the first two laps of the race until Emile advised me to save my legs for the final laps and the next two hard days still coming. Julian Rammler spent almost 50 kilometre on his own before being caught by his teammate Sascha Damrow, Austrian Andreas Muller, German Axel Hauschae and Team Barcode rider James Sampson from UK. In the end, Damrow won the race ahead of Muller and Rammler. The peloton came in three minutes late with no changes in the overall classification.

Stage 4 – Scarborough circuit race
Saturday was the last day left to place ourselves in good position for the difficult final stage. The fifteen lap race was mostly flat with some rollers plus one short and one steeper climb. Despite the easy appearance of the stage, lots of action and an exhausting race was about to happen. As usual, attacks began early in the race with Dimitri Deliot of Guadeloupe initiating the first move. Team Barcode Eric Murphy rider followed the move and the break quickly gained time over a disinterested field.

The heat made it difficult for everyone and riders needed bottles to wet themselves every fifteen laps of the race. Halfway into the race, Emile Abraham attacked and was coming in fast on the breakaway. A few laps later, Barcode rider Pete Williams, sitting in fifth position, managed to escape the field and bridge to the breakaway. The situation was ideal for Team Barcode with three riders up the road and with Pete as virtual yellow jersey. The situation was almost perfect but Emile wasn't lucky, crashing into a car after a corner. However, Pete was able to grow ihs lead up to 5 minute with one lap to go before the other teams realises he was only 20 seconds behind on the GC. Pete gave it all and took a strong second place on the stage behind Colin Wilson, as well as taking the GC lead with a comfortable lead of 2:47 over Lisban Quintaro and myself.

Stage 5 – Tour of Tobago
The last stage of the Tobago Cycling Classic is always the perfect terrain for final attacks. With Pete Williams in the lead, the tactic was pretty simple: control the race all the way to secure the win and possibly take over the second position as well, myself only 0.2 seconds off the second place. With category 1, 2 and 3 climbs after only 20 kilometre of racing, Daniele Defrancheschi and Roger Smart set a tempo fast enough on the highway leading to the mountains so only fools would try to get away.

The first climb was smooth and quite easy with 5-6% gradient, opposite to what was coming later on. However, the pace maintained by Barcode rider James Sampsons was fast enough to eliminate many riders. I was not very lucky, flatting at the top of that first climb with a fast and twisty descent coming on and the caravan about one minute behind because of the riders dropped on that first climb. After the wheel change, I went on a very hard chase for 25 kilometre of all-out effort of ups and downs to finally connect with the lead group, which was now down to fifteen riders. Now in the lead group, I tried to recover as much as possible but in the end, I had spent too much energy in the chase and now my legs couldn't keep up the pace on the long and steep Speyside. Emile Abraham stayed with me to help me as much as possible till the finish. As for the lead group, stage 1 and 3 winner Damrow soloed to victory with a two minute lead, climbing to seventh overall in the process. With Pete Williams, James Sampson, Eric Murphy and André Tremblay in the lead group, we secured the team classification and André climbed to 5th overall, as I dropped to 9th, losing about 8 minutes on the stage.  Results