The 2012 Track Worlds concluded on Sunday with world titles for Great Britain, New Zealand, Belgum and host Australia - the latter including a new world record.  Canada had only one rider racing on the final day - Tara Whitten in the Women's Individual Pursuit, where she finished a heartbreaking fifth; just out of the medal round.  [See our report by Monique Hanley Here]

The Australian left the starting gate to a mighty roar from the home crowd to clock 18.716 seconds for the first lap.

As Meares rode the second lap, the crowd’s support increased and lifted the roof at the velodrome when the clock stopped at 33.010 seconds to announce a new world record.

She crossed the line with her right arm aloft after the scoreboard confirmed Meares had lowered the world record by 0.286 seconds, which was set by Lithuania’s Simona Krupeckaite in 2009.

Her win follows success in the women’s keirin on Saturday.

“This track has been so good to me in the past and I haven’t ridden a time trial in 18months,” Meares said.  “I knew tonight was going to be special, I did forget how much (it hurt) ... the old legs were hurting afterwards.  My goodness I couldn’t believe how loud this crowd was for me tonight.”

She joins Belarussian Natalya Tsylinksaya as a four-time 500m TT winner, with France’s Felicia Ballanger the most successful with five world titles.

“It’s something special [to win] my 10th world title in the event where it all began for me eight years ago,” Meares said.
Welte said she knew the time by Meares was out of her reach but she eclipsed the times of Varnish and Kaarle McCulloch of Australia.

“I know I can’t go as fast as Anna,” Welte said.  “When I’ve seen the time of Jess and Karle I knew I had to go under my personal best to get a medal here.”

Sir Chris Hoy won his fourth world Keirin title with an audacious move on the finishing straight to power through a gap in the men’s final.  The win makes Hoy the greatest winner of world Keirin championships as he surpasses Frederic Magne of France and Germany’s Michael Hubner with three titles each.

Hoy was fourth wheel as the bell rung on the final lap of eight with before the British rider followed teammate Jason Kenny on the back straight.  The 36-year-old dropped behind Kenny to the sprinter’s lane where Hoy held back, then surged between Germany’s Maximilian Levy and Simon Van Velthooven of New Zealand.  The reigning Olympic champion passed Levy to cross the line pumping his fist.  Levy, 2009 world keirin champion, won silver while Kenny won bronze.  Van Velthooven crossed the line third but the New Zealand rider was relegated for entering the sprinter’s lane when a cyclist was already there.

Hoy said he thought his chance of winning had gone with half a lap to go as he waited behind Kenny.

“I thought he was going to go with everything and he didn’t,” he said.  “Normally I would have gone around the outside ... I’ve never done that before in my life – took the inside – but it paid off.  Honestly I didn’t believe the door opened and I could get through. In some ways I’m very lucky, and very grateful to have won.”

He thanked the crowd for their “fantastic” support.

“They’ve been very fair,” he said.

“They’ve cheered everybody and they’re a very knowledgeable crowd.  So it’s been a pleasure to race here. I thank Melbourne for having us.”

For Hoy, the Keirin win was his 11th world title.

He said all his world titles were special but this one might be his last appearance at a world championships.

“This is particularly special because, as I said it might be my last world championships, it might not,” Hoy said.  But it’s the last meaningful race I’ll have before the Olympic Games (in August).  It’s a great one to give that confidence boost.”

Shanks led after the first of twelve laps and never relinquished her lead to cover the 3000 metres in 3 minutes 30.199 seconds.  Her winning margin was 2.151 seconds.  It was the 29-year-old’s second success over Houvenhagel after she beat the Brit for gold at the 2009 world championships in Poland.  At the last world championships held in Melbourne eight years ago, Shanks’ compatriot Sarah Ulmer won the same event.

The New Zealand cyclist had qualified fastest with a world championships record of 3 minutes 27.268 seconds on Sunday afternoon.  Shanks said being a world champion was a feeling an athlete wants to repeat.

“It’s so hard to get and ... once you’ve had that feeling, once you want it again more and more,” Shanks said.  “There were really fast times in the qualifying and I thought I’d have to do a PB (personal best) just to make the final and I was absolutely stoked with my rides tonight.”

“It’s totally like a home crowd there are so many Kiwi’s that have come over and I think they (Australian fans) were giving us a little bit of pay back after what Aaron Gates did for Cam Myer last night in the points race.”

The Belgian duo won four of the 10 sprints, while gaining a lap with the Netherlands, Australia and the Czech Republic with 43 laps left.  Their win at the ninth sprint gave them an eight point buffer on Great Britain with only five points available with the final dash.

De Ketele said that he was a world champion was yet to sink in.

“I try to recognise us as world champions now but it’s strange, it will only come in when we get home,” he said.

Austria’s Andreas Graf and Andreas Muller gained a lap on the field on lap 133 to place them in the lead, but the move led by Meyer and Howard negated their lead.  Thomas said he was absolutely on his knees with around 80 laps left but the performance of his teammate Swift kept him going.

Meyer paid “full credit” to the Belgian and British pairs.

“They had more points than us on the day and we’re still very happy to be on the podium in front of a home crowd,” Meyer said.

As defending champions, Meyer acknowledged he and Howard were marked riders.

“I had it yesterday, when I came away with a win [in the Points Race], but I spent 150 laps frustrated and today I spent 200 laps frustrated,” Meyer said.  “It’s disappointing that some countries go out there with a mindset that “oh, we’re going to follow one team.  I know that’s bike racing, but I’m on the bad end of it, unfortunately, and so is Leigh (Howard).” 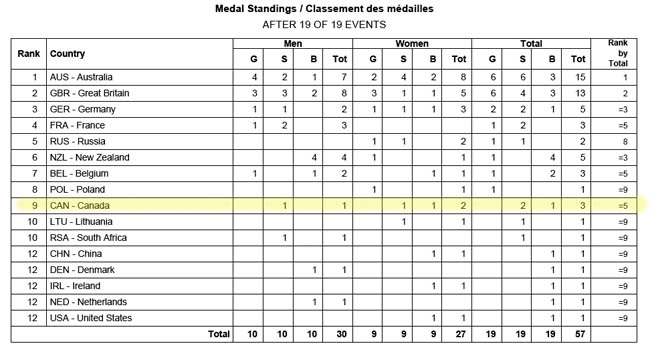