The course was roughly the reverse of last year’s Provincial Championships.  Making use of the topography of the Niagara Escarpment, it was essentially a long but meandering climb to the top of the ridge followed by an equally twisting descent.  Added to that were numerous rock features, a couple of very slippery water crossings and a pair of short but steep uphill pitches.

Elite Women
Only seven women took to the start, and it was Sin who led the group off the line.  Immediately after the opening 200-metre straightaway the course took a hard left up a steep pitch and Sin was overgeared, opening the door for Laura Bietola (Real Deal/Gear p/b Fieldgate).  Her lead was short-lived, however, as Sin passed her approaching the first singletrack and never looked back, winning by over three minutes.

Bietola tried to stay close, but the effort may have proved costly, as she was passed halfway through the opening lap by Sue Haviland (Norco Evolution), and eventually pulled out of the race.  Haviland rode on her own for the duration to finish second, while U23 Katlyn Dundas (Trek Store CC) finished third. 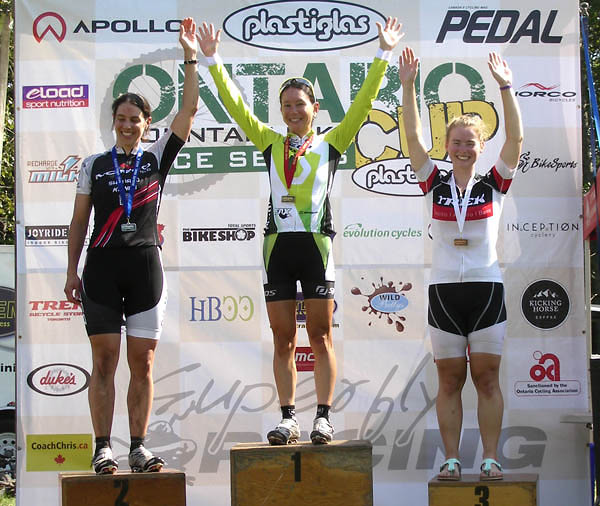 Living in nearby Collingwood, the race offered an excellent opportunity for Sin to test herself in advance of the World Championships in South Africa, for which she leaves on Tuesday.

“This race was really good preparation.  It’s nice to be able to race close to home and get in that training without having to travel and the stress of that.  Yeah, I feel good going into Worlds.” 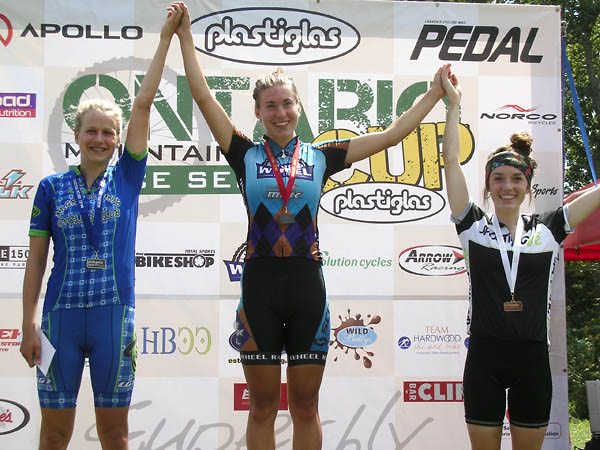 Elite Men
The men’s field was also a little smaller than average, with 34 riders toeing the line.  Once again Kelsey Krushel (TUF RACK Racing) took the holeshot and led through most of the start loop.  Joining him at the head of affairs were Watson, Disera and Marc-Antoine Nadon (Scott-3Rox Racing).  The quartet stuck together for a good portion of the opening lap before Watson and Disera upped the pace and rode away.

For three laps the leading duo stuck together, swapping the lead between them.  On the fourth lap Disera got a gap while passing lapped traffic and was able to hold it, taking the win by 42 seconds over Watson. 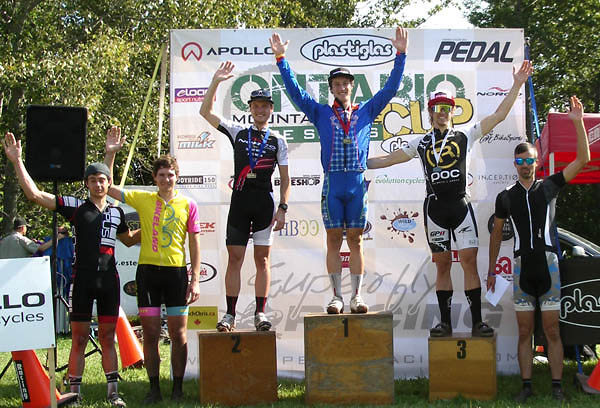 “It was absolutely phenomenal,” said Disera of the course.  “It was so much fun.  Just being able to get all the climbing done, and you get a little bit of rest now and then, and then you just flow the rest of it.  Thirty percent of it wasn’t even pedaling.  You just went for it and pumped through the downhill.  It was fantastic.”

With numerous high-profile wins already this year, Disera is obviously riding a wave of good form.  For his part, Watson wasn’t overly disappointed in finishing second to a junior-aged rider.  “I watched Ste. Anne last weekend.  I watched him race that World Cup and saw how fast he was.  I wasn’t surprised to be duking with him today.”

Despite having to give way to Watson and Disera, Krushel was able to shed Nadon and take the third step on the podium.  “I noticed that the pace was settling down a little too much and I thought I could step it up a little bit.  I took the lead before a (section of) singletrack and put in an effort in there and there was enough of a gap to get away.”

Nadon slowly faded over the course of the race to finish ninth, while Davis Ross (Team Bikeland) and Matt Martindill (Independent) moved up to secure fourth and fifth. 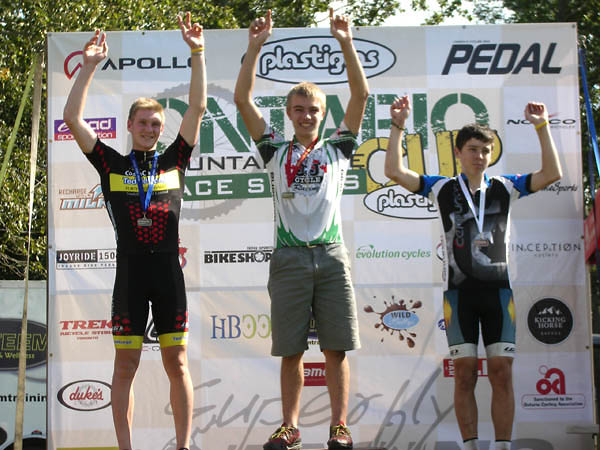 Race Notes
-Disera will be joining Sin at the World Championships in South Africa.  Currently ranked sixth in the world among junior men, the Barrie resident is hoping that a front-row starting position will help him to finish in the top-five.

- Longtime singlespeed holdout Davis Ross has gone over to the dark side, perhaps for good.  While scoping out the Mont Ste. Anne course in May, the Wyevale resident decided that the climbs were steep enough to warrant some extra gears, and made the switch.  He admitted he is still getting used to having a choice of gears, but will stick with it for the time being.

- Echoing Disera’s comments, Sue Haviland was also complimentary of the course.  “This was a really fun course; probably one of my favourites so far this year.  The climbs were hard but nothing out of the ordinary I’d say, and the descents were fun.”

- According to Sean Ruppel of Superfly Racing the course for the Provincial Championships is still under construction, but indications are that it isn’t going to be easy.  “It’s going to be a really tough course,” says Watson, who lives in nearby Craighurst.  “Really hilly; really hard, grinding, sandy climbs.”

- Krushel, for one, is looking forward to Provincials. “I’m going to hit Provincials as hard as I can.  I came off my first top-ten at a Canada Cup (at Whistler) earlier this week.  I just want to take it to the next notch for Provincials.  We’ll see if I can be third or better.  It all depends who shows up and how my legs are on that day.” Krushel ‘s bike has yet to make it back to Ontario, so he borrowed a bike from Scott-3Rox Racing manager Kyle Douglas.