More than one rider referred to the 2013 Hansen Industries Canadian Cyclo-cross Championships as epic, and it certainly was an appropriate description.  Rain throughout the day created a muddy, slippery circuit that became more treacherous every race, and strong fields resulted in aggressive racing.  In the marquee Elite races, Catharine Pendrel (Luna) took her first cyclo-cross title for the women, while Geoff Kabush (Scott-3Rox) proved that he is still the man to beat with his fifth win.

The 2.9 kilometre circuit had a bit of everything - long grass straightaways that sapped energy as they became more and more waterlogged, off-camber corners that were almost unridable  in the mud, a steep stair run up and no less than three deep sandpits.

The day began with the youngest categories - Under 13, Under 15 and Under 17 for both make and female competitors.  The competition was just as intense here as in the Elite categories.  Cheered on by parents - many of whom would race later in the Masters categories - these riders rode for 30+ minutes, only 10 less than their parents.  Some were barely tall enough to drag their bikes over the barricades, but they persevered.  It was inspiring, and gives hope for the future.  (Full results can be seen Here)

The Masters races began with the 50+ men and 30+ women.  Peter Lawrence (Soul Sportif) took yet another title, ahead of Robert Orange (Ride with Rendall) for the men.  Orange was the only rider to have a chance of staying with Lawrence, but gradually began losing ground under the relentless power of the Alberta rider, who was strong through all sections of the course.  In the women's race we had three potential winners - Alana Heise (Terrascape), Janna Gillick (MIVA) and Kristin Walters (Crave).  Heise and Gillick swapped the lead in the early laps, with Walters just behind them.  However, this raced became the second longest of the day, with officials calculating one lap too many, leading a race of over 51 minutes rather than the scheduled 40.  Heise proved to be the best equipped to handle the extra distance, dropping Gillick in the final laps.

The Masters 40+ and 30+ men were two of the biggest fields of the day, and saw some of the most competitive racing.  In the 40+ race two Alberta riders fought it out, with Ian Auld (Soul Sportif) and Andre Sutton (Hardcore CC) at the front.  Auld took the win by a slim twentyone seconds.  The final race of the morning session was the 30+ men, and it proved to be the tightest battle of the day, with only three seconds separating first and second.

Chris McNeil (Soul Sportif), Vincent Marcotte (Nordica) and Cory Forrest (Speed Theory) took the early lead, but Matt Staneland (Jasper Source for Sports) made an impressive surge from sixth to the leaders in the middle of the race.  Marcotte was dropped slightly, leaving McNeil, Forrest and Staneland together for the final lap, until Forrest dropped back with a mechanical, forcing him to run to the pit and eventually to finish fifth.  McNeil and Staneland took turns attacking each other, but were still together with 250 metres to go as they hit a series of tight off-camber turns before the final finishing straight.  Staneland took more chances to try and distance himself from the fast finisher McNeil, but it resulted in a crash in the final corner, allowing McNeil to take the win, as the Soul Sportif team swept the Masters men categories.

The weather didn't improve for the afternoon races, in fact, raining even harder for the Elite and Junior women, and the Junior men who started two minutes behind them.  The women had a clear favourite - Pendrel - who has been dominant in the local cross scene through the Fall.  However, she had strong competition from defending champion Mical Dyck (Pro City Racing/VAC) and another former winner, Wendy Simms (Kona).  As expected, Pendrel set a hard tempo from the start, opening a gap that only Dyck could match.

The 2011 mountain bike world champion was particularly strong in the sandpits, and was the only woman to consistently ride them, allowing her to pull away.  However, Dyck received a boost to her chase in the form of Simms, who rode up to her on the second lap.  Dyck seemed to have more power, but Simms was better at handling the multiple running sections, jumping on and off her bike smoothly, and choosing to run off camber sections that others (including Pendrel) rode, often losing time in the process.

This kept Pendrel in sight of the two chasers, and a rear flat in the third didn't help her.  Luckily, it was just before the pits, so Pendrel was able to avoid losing much time, but it kept the winning margin to twenty seconds.  It was even money on Dyck and Simms for second, but the defending champion managed to find an extra bit of strength in the final kilometre to pull away for the silver medal.  In the four rider Junior women's field, Pro City Racing/VAC swept the podium, with Clara Mackenzie taking the title. 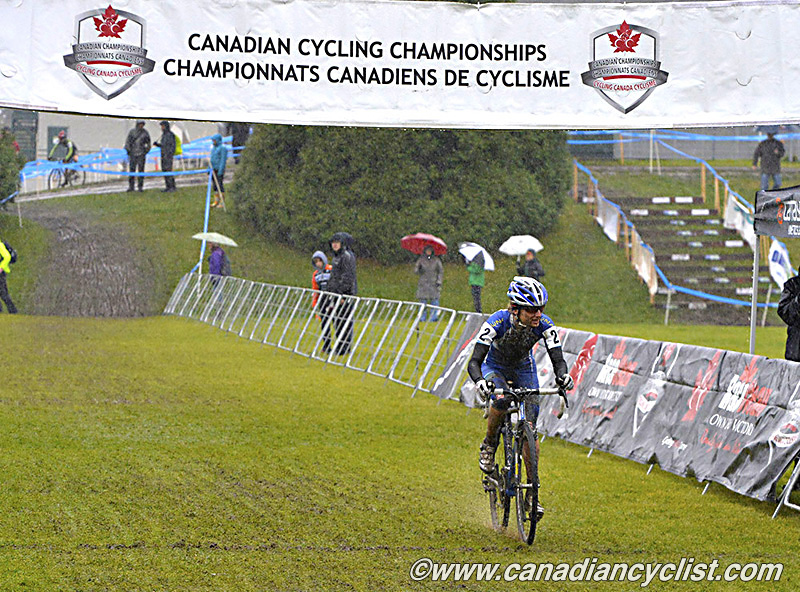 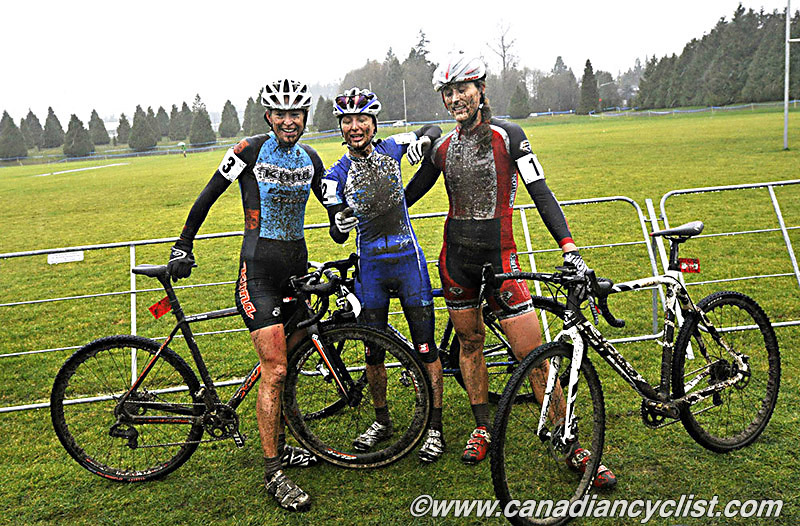 [Note:  We have an interview with Catharine Pendrel Here]

The Junior men's race was between Manitoba and Alberta, with Willem Boersma (Cycle-Smart) going up against the Team Alberta/Juventus duo of Mason Burtnik and Sean Germaine.  The Alberta riders charged to the lead on the first lap, but Boersma was right with them, just biding his time, and on lap two he broke clear.  From that point, all Burtnik and Germaine could hope for was a mistake, which didn't happen as the Manitoba rider steadily rode away to win the title by over a minute.  Burtnik won the battle for silver by nine seconds over his team mate.

The final start of the day was for the Elite men and (two minutes later) the Under 23 men.  Kabush was favoured in the Elite race, but he had stiff competition.  Former champion Mike Garrigan (Van Dessel) got the holeshot through the first corner and set the pace for the opening lap, but Kabush, Aaron Schooler (H&R Block) and Evan McNeely (Norco Factory) were all close behind.  McNeely was riding up a category from Under 23.

Schooler and Kabush joined Garrigan on the second lap, dropping him fairly quickly.  McNeely caught and passed Garrigan to bridge up to the leaders, but could not hold the pace for long, dropping back to Garrigan.  In the front it was down to Kabush and Schooler, but behind there was an interesting battle going on for third.  Kabush's team mates Cameron Jette and national mountain bike champion Derek Zandstra were steadily reeling in the chasers, as Garrigan and McNeely both faded after their efforts to stay with the leaders.  The tactic proved to be a success, as the duo moved into the final medal spot with 20 minutes remaining.

At the front, Kabush was biding his time, watching for the right moment.  It came on lap three laps when he opened a gap through one of the sand pits.  From that point it was a matter of keeping the pressure on.  Schooler fought valiantly, keeping the gap to only six seconds at the end of the lap and just ten seconds a lap later, but then it started to creep up - 26 seconds with three laps to go, then 35 seconds, over 40 seconds at the start of the last lap and a minute at the finish in near dark conditions.  Jette and Zandstra rode together to the bitter end, with Jette taking bronze by just one second ahead of his team mate.  An impressive day for Scott-3Rox, finishing first, third and fourth. 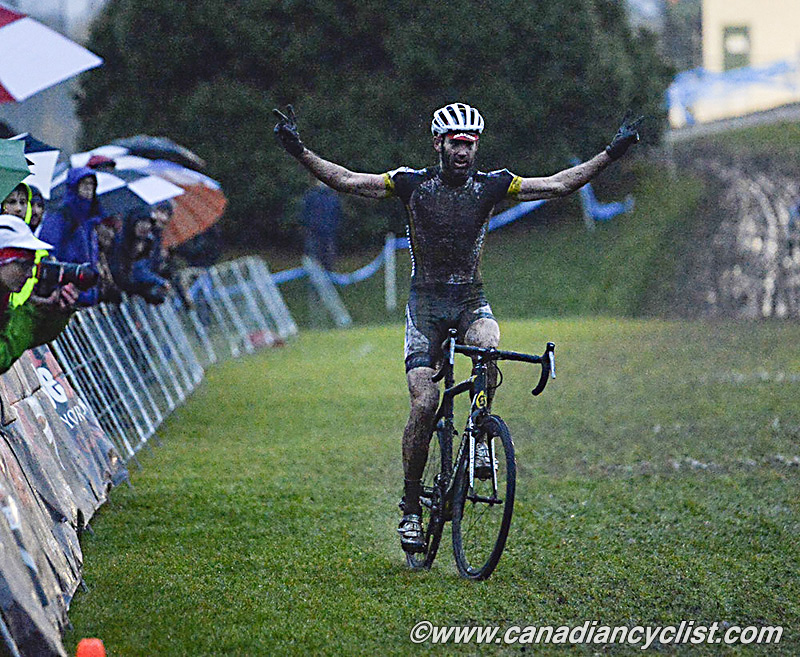 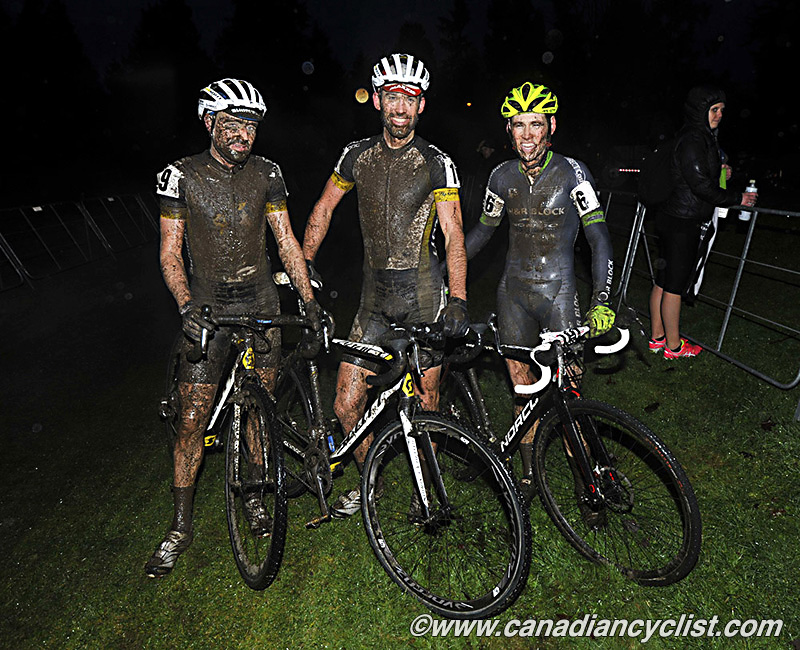 [Note:  We have an interview with Geoff Kabush Here]

In the Under 23 men's competition, Michael van den Ham (Cycle-Smart) was clearly the dominant rider in the field, particularly given the absence of Evan McNeely.  The Manitoba native rode with Marc Nadon (Scott-3Rox) in the early laps, as the pair rode away from Connor Wilson (Team Alberta/Juventus), and then opened a gap on the third lap as he began reeling in riders in the Elite category that started two minutes ahead of him.  van den Ham, who has spent the season racing in the competitive New England scene steadily increased his lead over the rest of the 50 minute race (which was actually a little short at 45:07) to win by over two minutes. 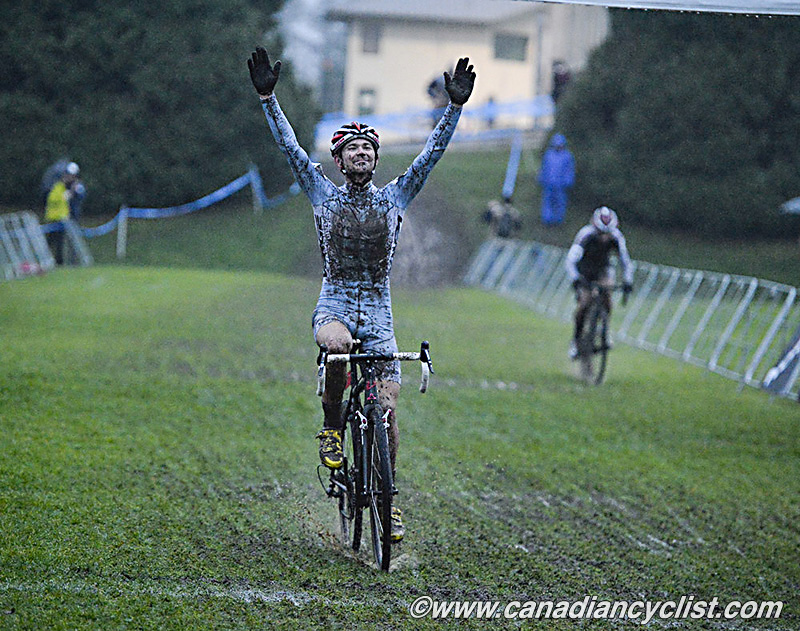 [Note:  We have an interview with Michael van den Ham Here]

An initial gallery of photos has been posted, but there are lots more to come

- Next year Nationals move to Winnipeg, so it was quite fitting that Manitoba took two titles - Junior and Under 23 men.  The organizers, who were busy watching everything and taking lots of notes, say that the date hasn't been firmly fixed, but they are looking at early November, given Winnipeg's reputation for cold weather.  They say that they are intending to avoid conflicts with U.S. events if at all possible.

- Neither of the Elite champions, Pendrel and Kabush, intend to race at Cross Worlds, in Hoogeheide, Netherlands, at the end of January.  Both have just about finished their Fall campaigns (Pendrel on Sunday with the UCI race here in Surrey, and Kabush a week later in Bend, Oregon), and will then take some time off before beginning to prepare for the 2014 Mountain Bike World Cup season.  Both Manitoba champions, Boersma and van den Ham, hope to attend.  Mike Garrigan also signaled his intentions to ride Worlds, and will leave for Europe this month to compete through to the Worlds.


- Some of you may have noticed from our updates and the live timing online that there were some ongoing revisions in results, with results for some of the Masters categories not being finalized until early this morning.  Cycling BC is using new (for them) timing software and there were a few (shall we say) difficulties…

- There were also some problems with a few race lengths, as officials struggled to calculate the appropriate numbers of laps in the harsh conditions.  This led to races too long in a few cases (notably the Masters women at over 51 minutes when it was supposed to be 40 minutes) and short in others (the Elite women and Under 23 men).

- Our Editor is very pleased to report that he successfully dried out all his camera and rain gear (particularly his boots!) just in time to get it all wet again today…

- Jim Bratrud, Chief Commissaire for the Nationals yesterday, will be again today, since the U.S. official who was supposed to do it today has been flight delayed out of California due to U.S. Thanksgiving.

At 8:35 this morning I raced the U17 women’s Canadian challenge. It rained all last night so when we showed up the course was pretty muddy. I did 2 warm up laps to get a feel for the more technical sections after the rain. It was definitely a different course having a lot of tight corners and off camber sections the mud made it pretty tough. I felt confident as we headed to the start line, but then the rain started again. It was crazy right off the bat because of the mass start so all the U17's, U15's and U13's (men and women) started at the same time. It was tough to get into a good position with the amount of people in the fairly narrow straights near the start. The sand made the course really tough having 3 sections of it and one being a corner. In the end I finished second to the Alberta provincial Champion (Sydney McGill) not too far back.

I will get another chance tomorrow with the BC GP of cyclocross (UCI 2) looking forward to that. It will be an even tougher race tomorrow, racing with the U19's as well and especially with the course getting destroyed with more rain coming tonight!