Grahame Rivers sent in the following report for Ontario's road racing season-opener:  I'm saving my legs for Hell of the North and didn't race Good Friday. Barbie Hope (photo below) has written a guest post on her Good Friday experience.

Good Friday is a race that many riders in Ontario refer to as the "Annual Crash Fest" and is often the most dangerous race of the year, with riders testing their early season fitness, getting used to new equipment and riding outside. I went into this race feeling confident and strong after a third place finish in Calabogie and was hoping that it wouldn't be as perilous as previous years. In reality, many crashes were had and the group was just as shaky as expected.

The Cat3 women's group raced alongside Master A/ B and Juniors. After Calabogie, many of us were keeping our eyes on Brook Noble after her solo breakaway victory. It was obvious right from the start that, while she was strong and was taking many long pulls, the group was just not letting her get away.

During lap two I decided there were too many riders in the group and was getting uncomfortable with the messy lines and launched an attack out of the second corner. I was reeled in quickly and everyone seemed to wake up. Riders started attacking and I kept my eyes on Tascha Paciga of Giant Toronto and Brook to see if they would launch any serious moves.

The real attacks started to come from the NCCH Junior's squad but it became clear after the second and third attempts that they were going to be caught and it was best to stay sheltered in the peloton and let the leaders pounce on whatever happened.

By the final lap, we settled in a comfortable pace as Brook seemed to be finally running out of gas. As we approached the fairgrounds, riders began to fight ferociously to set themselves up for the sprint. I worked my way over to the outside, being a mountain biker I felt far safer going over gravel and grass to get to the front than risking a DQ or fighting through the middle.

The moment we took that final corner, some of the women seized the opportunity to move up and filed down the left (inside) side of the turn and as the group closed around the corner I watched the left side of the group go down - maybe three or four riders yelling and bikes flipping over each other.

The moment the fairgrounds come into view the pace picked up drastically and I decided to move to the inside hoping that I could cut the inside of the little corner before the turn. It turned out to be a little too sharp and I had to brake momentarily to keep from being knocked down. Launching into the sprint there were far too many Juniors, Cat 3s, and masters to really know my true position in the peloton so I simply pushed as hard as I could with my tired legs and crossed the line beside Morning Glory Cycling Club member Nicole Lentini. The sprint went to Junior Naomi Desousa, Brook in second, and Jacqueline Gauthier in third. I was happy and surprised to have finished with the bronze in Cat3.

Overall impressions: the day was really fun and organized tremendously. Kudos to Hamilton Cycling Club for putting on a great day with friends, family, and teammates enjoying some excellent racing. 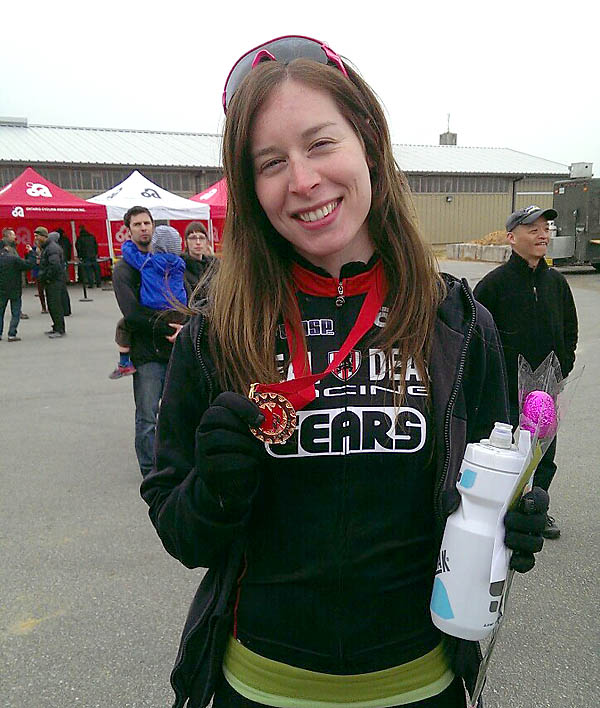