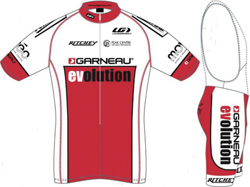 Tim Abercrombie explained, "The name Evolution was chosen to reflect our 'evolution' into a top caliber racing team and to reinforce the strong relationship the team has to Escape Velocity and dEVo as club riders and youth evolve into talented and dedicated cyclists. One of our goals is to be a competitive racing team and we wanted to build a team identity while maintaining our connection with Escape Velocity." This will help GE further its objective of a stronger connection with dEVo to attract and retain strong young riders. 2008 Team rider Jeff Ain is now the dEVo coach to which Team Manger Jak New said "Jeff is an experienced and well-respected racer and GE looks forward to a close relationship with Jeff and dEVo."

This winter GE has been busy with preparations for the upcoming season. A spring training camp will be held in early March to prepare for spring racing. "We will continue to push our performance," says manager Jak New. "We will be a force regionally." Several riders competed in the cyclocross season, some escaped the weather for training in southern destinations. Other riders are excelling on the track. New GE rider and former dEVo racer Jacob Schwingboth traveled to Manchester, England where he competed in Revolution 23, part of a track series of races.

Louis Garneau has increased their support and is now a joint title sponsor. Garneau Evolution will be sporting a new kit design with Garneau's Equipe jerseys and Power Bib shorts. Riders will be rolling custom-painted 2009 Garneau Sonix 6.4 bikes, with Shimano Dura Ace components and wheels. Rounding off the equipment are new LG Diamond helmets, Carbon shoes, and sunglasses.

GE is also very pleased to have the support of La Bicicletta Pro Shop and, new for 2009, Ritchey will be supporting GE as well as EV and dEVo. The riders will be receiving fitness testing from Peak Centre and therapy from Moveo Sports Therapy. Powerbar is ensuring riders have the best performance food available.

The team maintains its strong link to Escape Velocity. "GE has firm roots in EV. Most of us came up through EV and dEVo and that relationship will continue to strengthen. Garneau Evolution and Escape Velocity enjoy a mutually beneficial relationship" says long time EV member Tim Abercrombie. The Team seeks to lift the level of racing success in EV by becoming a prominent force at the top level. Abercrombie continues, "The success of Garneau Evolution will inspire EV racers to improve and will provide expertise to EV members in one of its core club values: bike racing."

Garneau Evolution is committed to developing young riders. New recruit Jacob Schwingboth rose through the dEVo program and has found great success on the track this year. Young Evan Flater joins GE as well from the Aviawest team. As manager New says, "By establishing ourselves as a well-supported competitive racing team, we will further our goal of attracting young riders that can learn and grow with guidance from our experienced riders."

The Team will continue its involvement with local charities in 2009. GE plans on hosting the "Race the Sunshine Coast Challenge" ride again this summer. The legendary ride attempts to ride up the Sunshine Coast across to Vancouver Island and back in a day. "We have to average 43 km/h over 30 km of hilly coastal road to make the ferry to the island!" exclaims Paul Beard of the 2008 race. The challenge stands intact. The 2008 ride raised money for the BC Children's Hospital.