The Ontario Cycling Association held its 2009 Annual General Meeting yesterday (March 14th) at the Toronto Bike Show.This year was more of a 'housekeeping' event, with few changes of importance.

Overall, reports from the organization painted a picture of a successful year in 2008 - increases in membership (particularly Road youth), website usage and an impressive gain in the high performance program - from 44 top-ten finishes at National Championships in 2003, Ontario has climbed to 156 top-tens in 2008.

On the financial side, revenues remained stable at approximately $1,000,000, despite the gradual reduction in government funding (faced by most sports bodies these days). The OCA is faced with one new long term expense - a fine under the Occupational Health and Safety Actwith respect to death of volunteer Tim DaSilva during a BMX track construction in 2006. The OCA was assessed a fine of $60,000 (plus 25% surcharge), to be paid off over five years. The OCA will be strengthening rules and policies over volunteer involvement and training in such projects in the future.

There was one set of by-law amendments voted in - the position of VP BMX was replaced with a Member-at large position on the Board. This is to reflect the integration of BMX into the OCA, and the fact the it is no longer necessary to have a separate position for this discipline (just like there are no positions specifically for Road, MTB, etc.).

There were four Board positions up for election, each filled by acclaimation:

All are two year terms except the Member at Large (which is one year to fill the remainder of the VP BMX term). There is also a vacancy in the VP Development position, which will be appointed by the Board. Duncan Vipond indicated that he will be recommending to the Board that Matthias Schmidt take over the position for the remainder of the term.

There was discussion about moving the AGM back to a Fall date from the Spring. After some discussion - pro and con - the Board will consider the issue further, and likely survey the membership.

Finally, the OCA Club Award was presented to Angry Johnny's, who won the award by a whopping 3,000 points over second place, reflecting their involvement in all aspects of the sport. 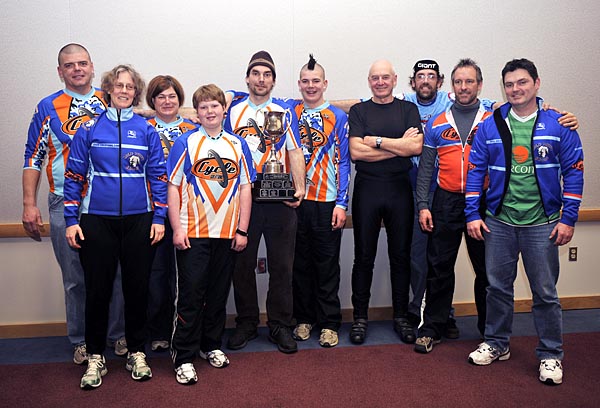