Canada's Monique Sullivan has been added to the Keirin start list for the Worlds, as well as the Women's Sprint.  Originally, Canada was allotted four spots for the Worlds - Zach Bell, Tara Whitten, Svein Tuft and a Sprint spot, which the CCA decided to fill with Travis Smith (primarily for the Keirin, although he will race in the Sprint).

Tuft's spot was specifically for the Individual Pursuit (as Pan Am champion), but he declined, with his new road obligations on Garmin-Slipstream.  So, Canada was down to three spots, until the CCA was informed last week that another Sprint spot was available for Sullivan, which included the Keirin.

The Canadians will race the following events: 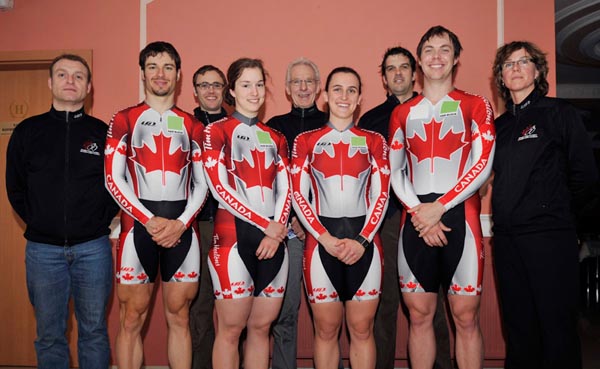 The track is completely new - there is still sawdust being swept up in places.  It is a beautiful facility, in the town of Pruszkow to the southwest of Warsaw.  The riders say that it is a fast track, with smooth transitions in the corners, so we should see some fast times.

There are a number of big names missing, including Brits Sir Chris Hoy (injured), Bradley Wiggins and Rebecca Romero, France's Arnaud Tournant and Spain's Joan Llaneras (retired).  However, there have also been some unexpected returns - both British - in Mark Cavendish (Scratch and Madison) and Shanaze Reade (Team Sprint).