Edmonton's Tara Whitten won the silver medal on Saturday at the World Track Championships in the women's Omnium event.  Josephine Tomic of Australia took the gold medal, and Yvonne Hijgenaar of the Netherlands the bronze.  The Omnium is a new event for women at the World Championships this year, consisting of five individual events, with riders receiving points for their results in each event. 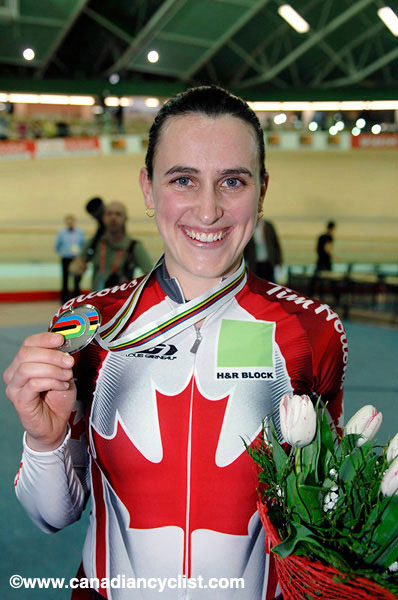 Whitten won the second event to take the lead, and went into the final event tied with Tomic on points after a poor showing in the fourth event.  In the final 500 metre time trial Whitten finished eighth and Tomic seventh, to give the Australian the win by one point.  Whitten is in only her second year of international competition, having switched from cross country skiing.

"I was just trying to remind myself to put it all out there for the 500," Whitten explained.  "I didn't know what I could do really, so I just reminded myself to go as hard as I could.  It's hard because it's so close [to gold], but I can't be disappointed.  I'm proud with the way I was able to refocus after the [fourth] race, when I lost my lead, and I know that now it is just a matter of fine tuning my skills for the future."