I would apologize to people who have been awaiting a “Kabush Report” but I hate it when people never update blogs/diaries except to apologize for not updating them. I am a little old school because I don't have a blog or website but, well, that sounds tiring. As you can see, it is tough enough for me to keep up with my friends, emails, phone calls, and write an online diary every couple months.

However, as my friends will tell me, I am competitive, and I have heard about this new game called Twitter. As my close friend Pinner ( twitter.com/Pinnerg ) tells me the goal is to have the highest followers/following ratio with the least amount of updates. I may help his score by mentioning his name but he doesn't look like he is winning at the moment. At our recent team camp I took a poll to determine if I should play and if I could be a competitive Tweeter. Peter, our man on the inside at Rocky Mountain, says I am no “nut cancer survivor” ( twitter.com/lancearmstrong ) but I might be around a “Christian Vande Velde” ( twitter.com/ChristianVDV ) level Twitter player. That seems like a pretty high benchmark, Christian seems like a pretty good twitter player, but I will see how I can do. You can help score me points by following me here: ( twitter.com/GeoffKabush ) . Actually Pinner just told me there is an official ranking page: twitheap.com/cyclists/

Speaking of Twitter, Barry Wicks figures he is just about the most famous person I know because he got a mix tape, which he is very proud of, to Lance at Tour of California. Now Lance mentioned some “guy named Barry” on his Twitter which is pretty good but I am not sure if it counts because no last name was mentioned. While out in NorCal last month I was able to counter Barry's points in the Twitter game by scoring a picture with full name on Tour of California champion Levi's twitter account; which I think should probably score more points. I also replied to Barry's mix tape challenge and you can see which one you like better if you have iTunes:

Anyway, way too much has happened since my last update to go through everything but there have been some fairly big changes going on. As you may of noticed in my reference above Team Maxxis has started a partnership with Rocky Mountain which I am pretty excited about. There were lots of rumours and it took a long time to materialize with a bunch of new sponsors but everything is set for 2009. We have some exciting projects we are working on together and it is pretty cool to be working with a company so close to my home in BC. I have been riding their new fancy carbon hardtail since December and I have been feeling like James Stewart slipping and sliding through the trails; without his occasional crashing of course. I am a big sports fan and I love watching Supercross; I can't wait to see if Stewart can stay on his bike and beat Reed for the title. I could be feeling like James Stewart because I have been running an even wider riser bar this year on my bike. 685mm is the new 660mm and I decided I am going to try to win more races on the downhills this year. A few of my new team-mates are running skinny flat bars this year and I am going to have to try to teach them the way.

Here is my advice for everyone:

Riser Bars with Bar Ends - Kind of like wearing panties under your shorts; defeats the purpose. That includes you Hestler... 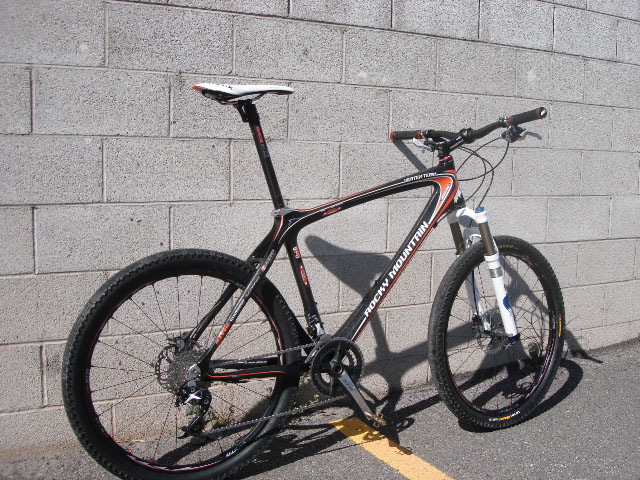 On the topic of “taking the piss”, what's up with the UCI banning skinsuits for downhilling. I mean, come on, they are now going to use a tape measure to define “cool” or “not cool”. My favourite pastime at races is bugging downhillers about skinsuits. Really, where is their dedication to winning. Do they want to pose down or go fast? Back in the glory days the coolest man ever was John Tomac in his full body latex suit and tension disc wheel. Sponsors can't even see their logos on baggy shirts. Even the most critical downhillers have a closet love affair with skinsuits. I hope she is mending up well, but even Rachel Atherton, of “skinsuites (her spelling) suck”, crashed this winter while training and obviously loving the feel in a GBR skinsuit. It is okay to admit it if you love skinsuits. Hopefully I just made some friends in the DH community with this month's “taking the piss”.

This winter I pretty much got up to the usual stuff. It was cold in Canada, snow kind of sucked for much skiing. It was warm in Albuquerque, riding was great there. Went on a sweet NorCal scouting trip in February; great place, great riding, great people. Apparently I now have a reputation out there for drinking beer, eating a lot of cheese, and having a lot or free time. I had fun doing a little helmet cam documentary on the legendary Grasshopper series found here: Part 1 of 2 www.vimeo.com/3449998. It is a bit long but I will work on that for next time. I just got a team camera so look for more episodes coming or follow me on Twitter. I will probably be propagating propaganda on there.

Oh, yeah, I just did the first official bike meet of the year in Fontucky, CA. It was pretty amazing because you could actually see the mountains when I arrived in Los Angeles. The new course was a bit more mountain biking and sorted things out a little more than the usual. The big rattlesnake I just about ran over first lap while leading was a scary change from the paintball kids. Had to fight off everyone gunning for the win but I have got to keep the young guys in check. I can't open the door and give them any hope; I can tell them it is a heck of lot easier starting on the front row when there is 120 guys. Just remember it takes time and there are no short cuts. As my mentor Juerg used to say I have been working hard to build the structure of my house for years and now it is time to party in it. It good to get the first win out of the way for the new Maxxis-Rocky Mountain team and now I am officially tied up with the legend Tomac with fourteen national series wins.

I watched a sweet video on Tomac from 1991 to get psyched up before the race.; pretty sick:

Until next time. Cheers,