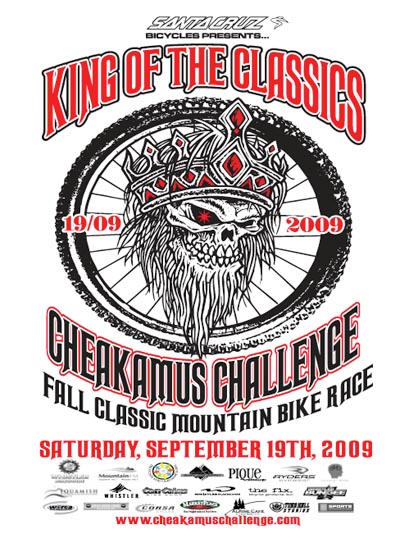 
With the date of 10 a.m., September 19, 2009 coming up quickly preparations are being made for the running of the 20th edition of the Santa Cruz Bicycles, Cheakamus Challenge Fall Classic Mountain Bike Race.

This is race director Grant Lamont's 20th year at the helm of this great race from Squamish-Whistler in the heart of Sea to Sky country.

The Cheakamus Challenge is a 70 km. Point A-B Marathon Mountain Bike Race the rides through some of the most spectacular terrain on the planet. Using trails that date back to the turn of the 20th century along the Cheakamus River are the events best features.

After the latest course inspection it has been decided to add a new section of trail to the race for 2009 in the Function Junction area, near Whistler.

With the latest developments of the Sea to Sky Trail project we wish to highlight the new extension that brings riders up to the new Athlete's Village. This will change the course slightly with the exclusion of TRASH which is in need of rehabilitation and in a construction zone. Race organizers chose to do this to simplify the routing for safety reasons.

With over hundreds of  riders expected from all over the world this years 20th edition is shaping up to be fast and painful with the first half of the course featuring  wide open double track and the second half concealing its teeth.

The teeth consist of repeated steep climbs followed by fast, flowing single-track along the Cheakamus River before pointing skywards once again up to TUNNELVISION, A BLACK DIAMOND DH trail with big rock faces and incredible views. Then it is up the final climb to the top of BIG TIMBER and the bucking downhill to the finish at DUSTY'S, in Whistler's Creek-side.

This event has been the place where world champions come home to gloat and show their stuff. We have seen Alison Sydor in the Rainbow jersey 3 times and Roland Green twice! Hopefully this year it will be Geoff Kabush and Catherine Pendrel who are going great on the World Cup.

There is also the Cheakamus Lite event that features the lst 40 kn. of the course and starts near the Whistler Bungee Bridge, opposite the Callaghan Nordic Facility turn-off. Sign on begins at noon and the gun goes off at 1 p.m.
This is a great intro for those who are unsure about the full course. The average finishing time for the short course was just under 3 hours in 2008.

To find out more and enter online go to www.cheakamuschallenge.com