A beautiful sunny day with almost no cloud.  Warmer now that when the women races in the morning.

Geoff Kabush, Julien Absalon and Jeremy Horgan-Kobelski  will all be running a single chainring (we have been told)

The men have just headed out on the first of 7 laps. A big group with Geoff Kabush (Canada) right up front with Absalon.

Over the climb and through the 1st feedzone  there is now a group of 8 clear: Florian Vogel (Switzerland), Julien Absalon (France), Geoff Kabush (Canada)

Noticable, by their absence from this group are Hermida and Sauser.

The 2 Swiss are at the front as they head to the feedzone for the 2nd time.  Abslaon and Kabush are next

Kabush took the lead position across the line in front of a long line - 18 riders all within seconds of each other.

Lots of crashes on the Hammerhead

Through the 1st feedzone  and the 2 Swiss riders and Abslon are starting to separate from the bunch.  Lindgren has  tacked onto the back.  Kabush 4th at 7 sec followed by Nys

Kabush and Nys have rejoined the lead bunch at the line

9 riders go through within 5 seconds of the first rider across who is Absalon.  then Schurter, Vogel, Lindgren, Kabush, Nys, Hermida, Flückiger,  Fontana.  Sauser 13th at 22 sec back

Hermida is starting to move up.. bumping Lindgren for 4th

Down through the Hammerhead, Absalon still at the front followed by the 2 Swiss.  Kabush has dropped back into 5th

Hermida is just making contact with the lead group.  Kabush still 5th with Nys at 13 sec. Fontana  is just behind them

At the top of climb:  Abslaon, Schurter, Vogel and Hermida.   Nys Kabush and Fontana at 30 sec

Through the 2nd feed, Absalon gapping the other 3 again, but they come back together gain as they hit a headwind.  Kabush away alone and is sitting 5th at 28 sec.  Nys and Fontana at another 5 sec

Hermida at the front now as they go through the 2nd feed.  Kabush goes through in a solid 5th position

Heading to the line to finish the 4th lap

Leaders through the Death Adder and Absalon has gapped the Swiss by ~ 3 sec.  Hermida hanging off the back

Down through the swooping descent toward the 1st feed, and his gap is increasing

Through the feedzone and Schurter jumps away from his teamate and has joined Absalon at the front.  Vogel has been joined by Hermida at 11 sec back, and is letting Hermida lead as the battle the slight headwind.  Kabush 5th at 36 sec.  Nys dropping back, now at 1:16.  Plaxton 19th now at 3:15 back

Up the climb Schurter is leading with Absalon on his wheel.  25 sec behind Vogel leading Hermida up the climb

Through the first feedzone and Schurter still at the front, but as they head to the single track, Absalon moves again to the front.

Up the climb Absalon is leading, but Schurter is right on his wheel

Through Hammerhead they are still together.  Behind them the battle for bronze is still on, as Hermida cannot drop Vogel

Through the first feedzone they are still together and Schurter goes to the front as they head to the singletrack, blocking Absalon's attempt to get the lead.  Schurter is pushing the pace

Through the 2nd feedzone and Schurter is being very aggressive, forcing Absalon to chase and now has a gap of a few seconds clear 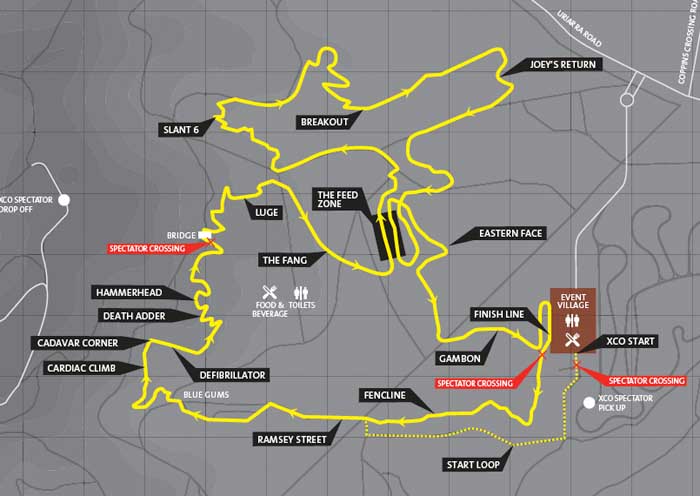