Day 1
As the World Cup season and build up to the 2010 Track World Championships and Commonwealth Games in late 2010 has begun, so have a series of training camps laid out as part of the National Track Team's plan for London in 2012.

Day One had the riders spending just under 4 hours of ride time between the morning and evening sessions with flying efforts of various distances in groups for the endurance riders in the morning and the sprinters doing some slow rolling starts and rushing drills. In the evening it was back for another session joining some other groups with 20 seconds on 20 seconds off sprint drills for all disciplines.

Day 2
After a very long day in the saddle on Day One there were some tired looking eyes and tight legs to start day two. The schedule for the morning session started with four sets of flying 100m efforts in pairs for the sprinters and four  sets, 12-15 minutes each,  of points race simulation drills with active recovery between.

All riders surprised themselves with how they responded after a good warm up and some of the younger members of the camp were riding very well. Scott Mulder ( a first year Junior ) was seen pushing the limits of US Olympian Adam Duvendek on several reps, and cadet and multi-time Junior National Champion Allison Beveridge setting a personal best in a standing 2km pursuit of 2:38.73. At the end of the cool down riders had clocked 2.5 hours of time in the saddle.

The evening session was part of the open Home Depot Center time slot with large groups ( 48 riders in total ) riding 12 minute sets at varying speeds. After four sets the night was finished off with a 60 lap motorpaced wind up. Another good solid day of training was had by all, over 4 hours and 125 km. Thursday is the final double session day followed by a team dinner.  Stay tuned for more reports. 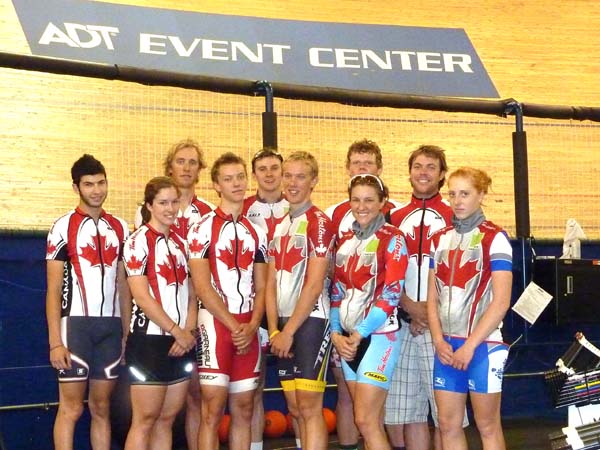