A beautiful sunny day in Mendrision Switzerland.  202 names on the start list including our 3 Canadians:  Michael Barry,  Ryder Hesjedal and Svein Tuft

Comments from CC editor Rob Jones who has been onsite in Switzerland all week.

"The crowds were already arriving 2.5 hours before the start of the race, and the press room is full of Italians.  The espresso machine is going to burn out...  Everyone picks the Italians and Spanish as the big favourites.

were chased down on lap 3 and then joined on lap 4 by the 4 additional: Gorazd Stangelj (Slovenia) Mauricio Ardila (Columbia) Olegs Melehs (Latvia) Volodymyr Zagorodny (Ukraine)  and quickly extended the gap to 5:49 by the end of the 4th lap

Peloton starting now, on lap 8, to wake up

More riders dropping off the back now

7:37 am.  Spanish riders have moved to the front and the pace has picked up.  Peloton is really starting to string out

Barry moving up near the front sitting 36th, Hesjedal and Tuft still hanging around at the back in 185th and 187th

10 have now dropped out and another 6 are well off the pace including Jason Mccartney (United States) at 7:20, Gerald Ciolek (Germany) at 8:59

The bunch crosses the line at 6:32 back

Barry sitting 154th, Tuft 162nd and Hesjedal is dropped off the back, not too sure if he has had a mechanical?  but he is over 7 min behind the bunch, so it may be over for him.  He has company back there though with Roger Hammond and Andy Schleck also off the back

Leaders have lost Olegs Melehs (Latvia) to a flat, now chasing back at 20 sec down

An attack now by a group of 5 off the front of the peloton and then another attack went by 4 more.

Peloton at over 5 min back

Full list in chase group at 2:29 behind the lead group that has been out there since lap 2

Canadians are in the peloton:  Barry and Tuft are the only 2 left of the 3 starters

Leaders cross with a gap of 2:42 on one single rider, José Rujano Guillen (Venezuela).  Then the large chase group at 3:06 and the peloton at 4:50.

Barry in peloton sitting at 108th and Tuft 164th

Australia is at the front of the bunch chasing, but they are at another minute 10 sec

Peloton, being lead by the Australians, chasing at another minute.  Barry at 105th, Tuft 158th

We still don't know why Hesjedal dropped out, but there was a crash on lap 10 that took Roger Hammond down and a few others, so maybe Hesjedal was taken down in it too.  Will update as soon as we know.

The lead group is about to be caught over the top of the 1st climb.  Peloton is still closing in on the chasers, they are under 1 min back now

Through the feedzone the gap to the peloton is 1:45

Lead group now has 2 min on the peloton, who have given up after the Australians backed off chasing.

and he catches him and passes and gaps easily.

Joaquin Rodriguez Oliver (Spain) comes up and joins Hoogerland over the top of the climb.

Peloton is getting further and further behind as the Belgians shut everything down, now over 2 min

Leaders now have regrouped on the descent, with Boonen and  Paolini being very aggressive

Up the climb there is small group of chasers at 20 sec with Rogers, Kirchen, Rujano, Zaugg,

10:47 and the leaders are caught and just as they reconnect another attack

Barry still sitting in the bunch in 70th, Tuft is now gone off the back

Lead group is 18 riders, who seem a bit a lot disorganized.  Peloton goes through just under 2 min back

Up the climb and the Slovenian, Stangelj,  who was out all day on the break has gone again and has 20 seconds on the climb

The Spanish and the French have gone to the front of the peloton and are chasing the Boonen group...  and have brought the gap under 1 min

Kirchen,  Rodriguez, Paolini, Zog have bridged up to Stangelj, and they have 18 seconds over the top of the climb

On the descent and it appears the peloton has caught the front chase groups. It is all together again.....

10:59  Cancellara has gone taking Kirchen with him and Paoloni too

Now there are more joining them, Cunego, Booenen, Zaugg , Valverde, Ballan and more

now a big group up over the top of the 2nd climb.  Boonen and Ballan  dropped off the back

Heading down to the start of the final lap

There is a group of ~ 30 away...  with Pozzato, Friere, Cancellara, Evans, Kroon, Cunego, Vinokourov

Vinokourov attacks at the base of the climb

Vino still away, but Kroon and Alexandr Kolobnev (Russian Federation) are chasing

Kolobnev attacks and goes by Vino

Cancellara attacks and brings Sanchez, Valverde, Gilbert, Freire, Rodriguez and Evans and  others up to Kolobnev up over the top of the climb

Down the descent and Cancellara is pulling out all the stops.  Sanchez on his wheel

Evans attacks in the final KM's, up the climb and he is away

Kolobnev and Rodriguez chasing at 5 sec back

Cancellara group are another 5 sec and not going hard

1 km to go and Evans is really flying 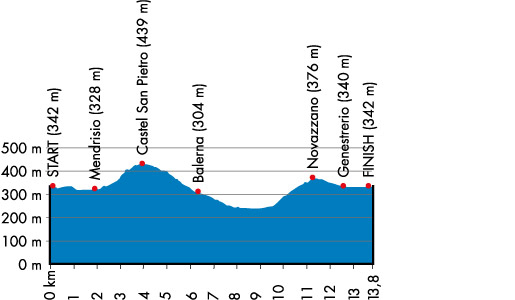