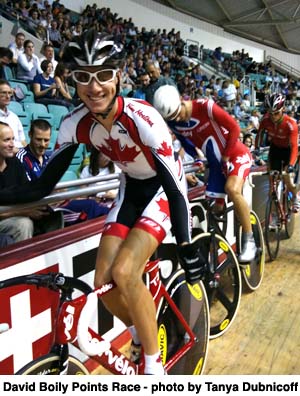 The National team training camp in LA ended on October 24th, giving athlete David Boily two days to relax on the beach before being Canada's sole representative on the track at the first World Cup in Manchester.   The trip got off to a rough start, as Coach Tanya Dubnicoff and Boily were faced with a van whose battery continued to die and difficulty finding a parking spot for the large vehicle; not to mention the concern about the other passengers on the flight whose luggage had "5-11 Task force", and "Taser International" stitched on them.  The team of two arrived safe, on time, and un-Tased.

After an incredibly busy season already, David had the opportunity of a lifetime. In his qualifying heat of 60 laps, he was in a heat with Chris Newton. David was very pleased when he saw Chris on his wheel at the rail at the start of the event and said " Hey he knows me, that's why he is on my wheel".

After the neutral lap David seemed to be in the right place at the right time, taking points in the first sprint.  After staying near the front of the group, he managed to be in contention for a lap, but just missed the break. On the fourth sprint he managed to sprint for fourth place to add one point. After the second last sprint David was on the bubble. Only 12 go through to the Final, so David needed at least one more point. He was sitting in ninth with others contending their own laps at the moment. With five laps to go he went for it, solo break away to earn five points for the last sprint. He looked like a pro out there .... David qualified eighth in his heat.

For the three and a half hours between the qualifier and the final, David chilled at the track, resting and waiting to warm up again. At 8:30 pm the Points Race Final began - 120 laps, 12 sprints. Once the race started David was near the front, moving as the pace line went hard then slowed up. After the third sprint, a collection of six riders were forming to make a break, David was at the back of this group. They were going hard, David was just a bike length away, he fought hard for at least two laps to get on. The gap grew, inch by inch, and it came to the point where David would not make it. He had to pull up and wait for the other group. That was the break which gained a lap on the field.  He was in position, it was just a matter of strength, max speed, a little more gas and he would have been there.

The rest of the race Boily was in survival mode. He managed to move and make his way through the pack, but by this time he was not effective. The race was taking a toll on him. With 30 laps to go he had to pull up and lose a lap just to stay with the group and finish the race in 19th out of 24 starters. As a 19 year old, who was thrown in to his first elite international race with the best track cyclists in the world, he did a fine job and came away with invaluable knowledge.