Cervélo SA is pleased to announce that Gérard Vroomen, co-founder of Cervélo has been named the 2009 Engineer of the Year by The Royal Institute of Engineers (KIVI NIRIA) in the Netherlands.

KIVI NIRIA President Jan Dekker presented the award to Vroomen Tuesday night at a festive event in the Museon in The Hague. In his presentation he said that Vroomen had distinguished himself through a combination of personality, entrepreneurship and innovation. The jury cited his ability 'to combine technical ingenuity with good business instincts and an above average dose of perseverance and guts.'

In addition to the award, Vroomen was also given a cheque for 20,000 Euro by the Van der Poel Charity Fund, to be used for a project of his choice that demonstrates how technology can contribute to a better world. The award itself is an original sculpture by well-known Dutch artist Annemarie Petri. 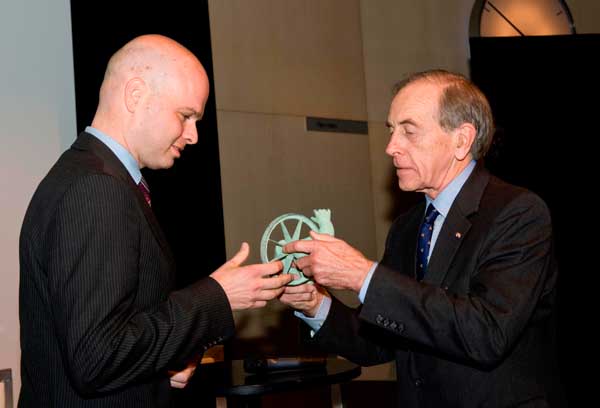 Gerard Vroomen, co-founder of Cervélo receives the 2009 Engineer of the Year award from John Dekker, President of The Royal Institute of Engineers (KIVI NIRIA) in the Netherlands. The award was presented Tuesday night at a festive event in the Museon in The Hague. - copyright Cervélo

"I am honored to be recognized with this award," said Gerard Vroomen, "and I share it with everybody at Vroomen.White.Design and of course especially Phil White. Since we started Cervélo in 1995 we have always made engineering the focus of our work, internally as well as when speaking with our customers. It is clear that without our engineering background, neither our products nor our company would have achieved the level of success it has."

KIVI NIRIA instituted the annual Engineer of the Year award in 1993 as a way to convey the value KIVI NIRIA engineers provide to society. It also highlights the varied and attractive career prospects that the discipline offers, thus encouraging young students to choose engineering studies.

Vroomen was one of three nominees for this years' award and succeeds the 2008 winner Saskia Rijtema. During the upcoming year he will act as the ambassador for KIVI NIRIA continuing to spread the message he has already effectively done with Cervélo - enjoy engineering.