Stage three of La Ruta has the riders tackle the longest and highest climb of the four day race - up the Irazú Volcano to over 3000 metres.  The Monavie-Cannondale team's Tinker Juarez did an outstanding climb towards the Volcano, ascending like it was the last climb of the entire race. 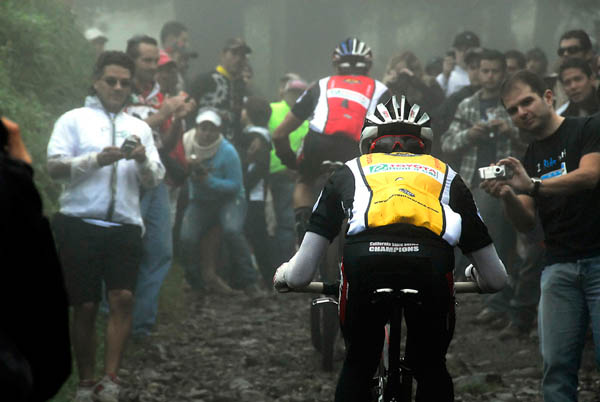 Tinker's team mate Jeremiah Bishop followed him, with a gap of close to three minutes along with Deiber Esquivel and Marc Trayter, both trying to break the trio apart and move up on the hunt for Tinker.  Juarez is out of overall contention, after getting lost on stage two, however, Esquivel was hoping to record his second consecutive stage win, and close the gap on race leader Manny Prado. 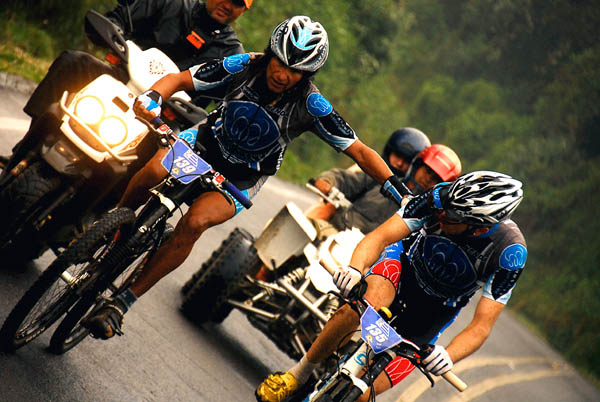 Prado fell back throughout the climb, mentioning afterwards that this was not his day.  He made a point of thanking the outstanding labor of his teammate Benjamin Bostrom, who paced Prado to the finish line within enough time to hold onto the overall lead.

The Irazú and Turrialba Volcanoes, both covered with clouds, greeted racers with a cold and wet passage through the surrounding forests. Abandoned roads of rocky terrains hosted a cold and extremely technical route, which invited racers to fly head first down the slopes towards the finish town of Turrialba.

Costa Rica's Adriana Rojas continues to lead the women. A solid display of technical skills and strength in the past three stages could get her in the first place in the podium on the last stage tomorrow.

Stage four is composed of 121 kilometers of dirt roads, long steep climbs early in the stage, and an endless, bone-jarring railroad segment that leads racers to the Caribbean coast, north of the port of Moín, Limón. Racers will ride a final 12 kilometers of marshy, abandoned roads parallel to the coast to finish the 17th edition of La Ruta.