The Canadian Track Training Camp is under way at the Home Depot Centre in Los Angeles. The track and hotel are feeling familiar for the staff and athletes, and everyone is getting into the routine. The third day of the camp had the athletes practicing the team pursuit and team sprint, in preparation for the Cali World Cup (Colombia).

There is a strong group of endurance men at this camp who were also at the training camp in October. They are growing as a team and getting to know each other better, as well as building a positive competitive training attitude. Stephen Meyer, who is hoping to make the Beijing World Cup Team in January, is feeling the push by head coach Richard Wooles to fight for a World Cup spot. Meyer is one of the athletes who has paid his own way to be at this camp and, as a full time university student and athlete, he finds the financial obligation being placed on the athletes is straining, but understands that the Canadian Cycling Association is seeking sponsorship and that by getting results the funding will improve.

Zach Bell, who will be competing in the team pursuit in Cali is excited about the opportunity. Asked to comment about the team pursuit training at this camp, he believes that the team is "still at the beginning of development. But the video analysis seems to show [that] the skills are finally there. Groups are tighter and missed exchanges happen less often, so we are now at the point were we have to grow the engine in the team.” Video of the team can be seen at www.youtube.com/canadiantrackcycling.

The sprinters have been improving each day of the camp. Scott Mulder, who represented Canada in Moscow at the Junior World Championships, is enjoying the work. "it was fun and hard at the same time. In the standing 250 meter efforts I didn't feel that great; standing 250s are something I am going to have to work on in the future. And in the 500 meter flying efforts I was feeling not to bad, but I didn't go out hard enough at the start. Overall, I had a pretty good time. The ice baths we had after the training day were a good way to recover our legs, I would like to have them more after training. Overall the day was positive and motivating."

Today the sprinters did training races for the Keirin and Match Sprint, with some exciting showdowns. Travis Smith, who returned home on Monday from racing in Australia, had a tough day. "I have felt good pretty much everyday since I arrived back from the Melbourne World Cup, but today I struggled! I enjoyed the racing match ups that coach Tanya Dubnicoff had set up for us, they were challenging and took a lot for me to race these young kids!! In the end, it was a good camp and I look forward to racing the Cali World Cup with Joseph Veloce and Stephane Cossette in the Team Sprint." 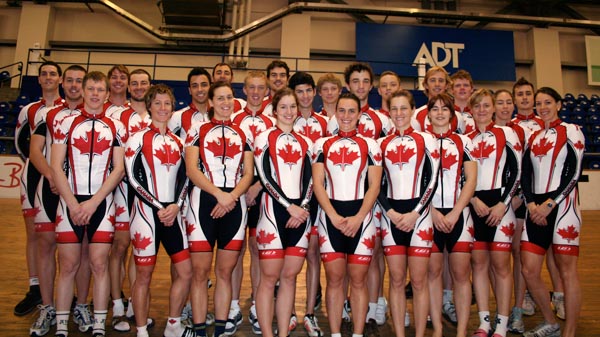