Cycling BC held an early season training camp in Tucson, Arizona for Junior and Espoir riders

Day 1: In a surprising twist, Tucson weather was a bit disappointing, especially considering half the crew came from the sunny, blue-skied Vancouver area. So in a rather slow start the group trooped out in full weather gear to brave hail-like showers and gusty winds. After only an hour of torment a decision was made to call it a day. That night the first team dinner featured a menu of curry-in-a-hurry with quinoa, beef skewers, and a salad.

Day 2: With communal joy the group woke up to the sunny skies that had lured us down to the middle of nowhere. With coaches Jeremy Storie in control in the team van and Jeff Ain directing on the bike, the group navigated through desert terrain. After a stunning climb over Gate's Pass, the group rolled back home for some much needed recovery. While some slept, others patriotically cheered on the Canadian hockey team, and yet others took their turn in making dinner. Tonight's cooking skills resulted in a scrumptious chicken pasta and baguette with balsamic olive oil dip. The enthusiasm is building for the 6000 ft elevation of Mt. Lemmon that features on tomorrow's agenda! 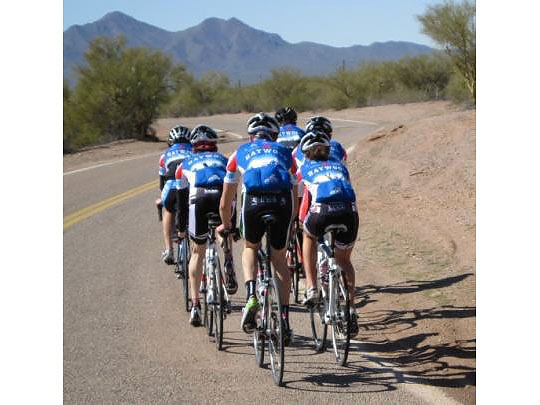 Day 3: Wednesday the group tackled the monstrous climb of Mount Lemmon. This climb is about an hour and a half jaunt across the city from where the BC Team is staying. Once the group arrived at the base, the climb commenced. Mount Lemmon is over 40 km of about 5-6% grade with minimal traffic and tops out at 8000 ft. The snow line was low and the highest climbers in the BC group managed to top out at about 30 kilometres, but needed to return due to cold and snow.

Later that evening an exhausted crew sat down to watch Canada thoroughly thrash Russia to advance to the semi-finals in the men's hockey and finished off with an excellent turkey chili prepared by Cody, Mike, Devan and coach Jeff. Tomorrow is a recovery spin day with a trip to the university area coffee shops.

Day 4: After a couple hard days of training the team woke up to spend a recovery day in the sun. Before setting off on the day's ride, the team took a couple group photos, first modeling our new chocolate milk t–shirts and then our Team BC kit. As it was a rest day, the team enjoyed a spin down to the university coffee shops. Cappucinos were downed on the patio as Jeff Ain made a new friend. With our caffeine cravings satisfied we made our way home to watch the Women’s Gold Medal hockey game and Jeremy’s bike cleaning seminar. Dinner was taken to New Orleans Kitts Peak climbs as the night’s team concocted a mammoth pot of jambalaya, which included the majority of the animal kingdom. The rest day will surely be enjoyed by all as tomorrow the team will take on another big day including the Picture Rock and Kitts Peak climbs.

Day 5: Team BC headed out in two groups, then we met at the base of Kitt Peak, which would be the team's big challenge for the day. The Kitt Peak climb, at 20 km, heads up to an observatory station. Coach Jeremy Storie promised the first rider to the top a tub of Kozy Shack chocolate pudding. Owen Harrison hit the gas when he heard this, and tucked into chocolate pudding and granola for dessert. Everyone was climbing well and got up in to the snow at the top of the mountain. Boris Martin, 140 pounds of sheer, explosive, terrifying power, broke his bike's chainstay, and had to watch the rest of the ride from the Team BC van co-pilot seat, captained by Jeremy Storie. Josh Hall, Erik Mulder, and Devon McLelland made a monster dinner for everyone, the whole gang then watched the Canada-Slovakia hockey game, pumped when Canada won 3-2. 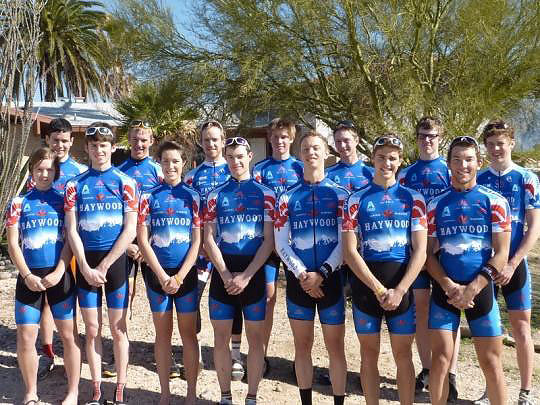