The Barry’s Roubaix “Hell of the North Fraser” presented by Local Ride Bike Shop is set for April 11 on a course in Pitt Meadows that features a new twist on the old B.C. tradition of the Harris Roubaix road race. Naturally, the customs of the Harris Roubaix, inspired by the classic Paris Roubaix “Hell of the North” will be carried on, with even more gravel sections on the course, and an additional series of corners on the back side of the loop. It is sure to serve up a tooth rattling and gritty good time. Proceeds from the event will go to the Local Ride Racing Team. 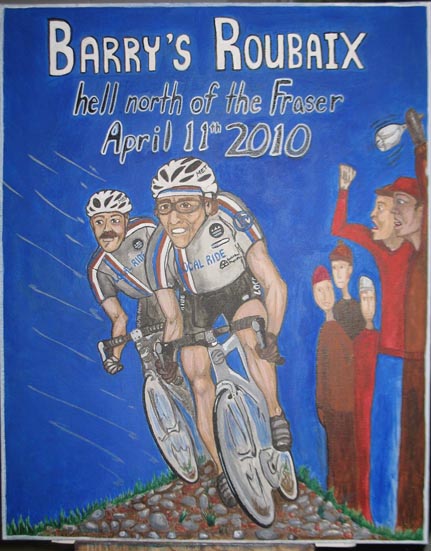 “A similar race used to be held in Pitt Meadows called Harris Roubaix. The name was changed, because we are no longer using Harris Road,” explained Barry Lyster, owner of Local Ride Bike Shop, manager of the shop’s successful racing squad, and namesake of the race. “The team renamed it “Barry's Roubaix” because of the play on words and to provide me some compensation for always organizing races, yet never being able to race them.”

Barry’s Roubaix will take place on the same day as the famous Paris-Roubaix Bike Race, which will see its 108th edition run in northern France on April 11.  Paris-Roubaix is known as “The Hell of the North” due to the gruelling conditions riders face over the 250km distance they must travel, and the many sections of historical, rough cobblestone roads they must negotiate, often in miserable rainy, cold and windy weather.

“For our race, the gravel dikes of Pitt Meadows replace the cobblestones of the legendary Paris-Roubaix, and if we have a wet windy April day, Barry's Roubaix will truly be the ‘Hell North of the Fraser.’” said Lyster.

Barry’s Roubaix will be the first regionally sanctioned race of the season, which means category upgrade points will be up for grabs. There will also be a U17 category race for all those future stars of cycling. Please visit the Local Ride website (www.localride.ca/barrys-roubaix) for further details and early bird registration information.