The Green Paper's release comes in advance of the upcoming Speech from the Throne and Budget, and outlines specific recommendations on how the Ontario government can and must play a direct role in encouraging cycling in Ontario.

One such recommendation is the creation of a fund for encouraging cycling infrastructure, policies and programs in Ontario.  The $20 million "Ontario Bicycling Investment Fund" would provide funding for initiatives to promote cycling in Ontario. The amount represents the provincial component to the HST which, beginning July 1st, will be applied to bikes, bike parts and products, and is based on data from the Bicycle Trade Association of Canada (BTAC). 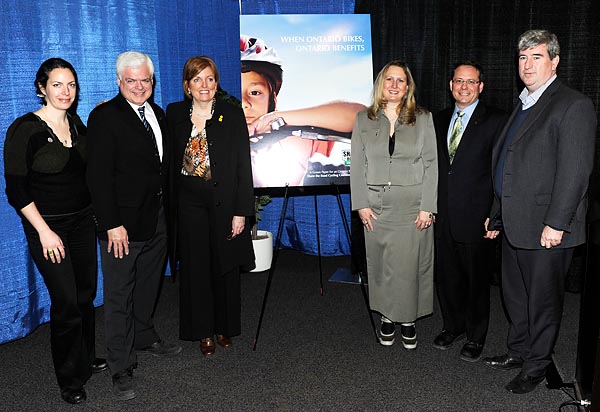 As the Green Paper notes: "Leadership involves making choices. Choosing to incorporate bicycling as part of a multi-modal policy approach at the provincial level is an idea whose time has come. This choice has a number of important benefits for our health and our environment."

"Leveraging the benefits of cycling to our environment, our economy and to lowering our health care costs involves fundamental changes to the way the province develops and approaches transportation policy. It will also require an investment of resources. We are recommending that the province re-direct this HST revenue as an equitable investment of taxpayer dollars - particularly in light of the overall transportation spending envelope in Ontario - and as a means of level the playing field with investments made by neighbouring jurisdictions," said Share the Road Cycling Coalition Founder and CEO Eleanor McMahon.

The Green Paper was developed by the Coalition in consultation with partners across Ontario and, further to the Coalition's 2009 Ontario Bike Summit, a gathering of cycling experts, municipal leaders and international speakers. Best practices in cycling design, policies and initiatives were shared with a view to building capacity, developing best practices and learning from other colleagues and jurisdictions who have embraced cycling as a mainstream mode of transportation and recreation.

"Our provincial government, unlike other provinces such as British Columbia and Quebec, does not currently play a direct role in creating policies and funding infrastructure, education and awareness initiatives to encourage bicycling. Our data and research, based on polling and surveys done in communities across Ontario, confirms what we heard at the 2009 Ontario Bike Summit:  Communities across Ontario want the province to play a direct role in funding initiatives which will make Ontario a bicycle-friendly province," McMahon said.

"In particular, jurisdictions such as Quebec have created a provincial bicycle policy which includes that province's plans for improving cyclists' safety and mobility; working with municipalities to give them the tools they need to encourage bicycling at the local level; and a vision for the future which leverages the positive economic benefits of bicycling - including promoting bicycle tourism and congestion mitigation. All of this in the context of the province's recognition that cycling plays an important role in reducing the impacts of climate change," said McMahon.

In order to develop a bicycle policy for Ontario - a comprehensive framework which includes the province's plans to encourage cycling - the Coalition surveyed municipal leaders, planners and engineers, law enforcement officers, cycling experts and advocates across Ontario on what they the Ontario government should be doing in order to encourage bicycling in Ontario.

When asked to rank in order of importance, what role the provincial government should play, 450 stakeholders surveyed in September 2009, said:

The Green Paper provides recommendation for action by the province in each of these areas.

In fact McMahon noted that this advice and direction are consistent with the critical elements already in place in jurisdictions around the world that have embraced cycling:  "Countries across the globe - including the United States - are embracing cycling as a solution to many of the major challenges facing our society: environmental degradation, the rising prevalence of heart and stroke disease in our general population, obesity in our children, increasing transportation costs and congestion. Ontario can and must make cycling an integral part of its planning, and must provide to communities the tools necessary to enhance their economic competitiveness and the quality of life of their citizens."

The Green Paper underscores the fact that Ontario can learn from our neighbors to the south, in addition to British Columbia and Quebec, jurisdictions that have invested in promoting and encouraging cycling.

Facts which support this include:

• The United States invested over $1.5 B in cycling enhancement, education and awareness programs in 2009. This amount does not include proposals to increase the $671 million made available via the "Safe Routes to School" legislation passed in 2005.
• British Columbia, through a provincial cycling fund "Bike B.C." has invested $31 million in cycling.
• Quebec has invested over $200 million in initiatives including the 4300 km cycling route - "La Route Verte", launched in 2007.  That province is earning an estimated $130 million a year as a result of this initiative.

"This Green Paper is being released in advance of the Ontario government's Throne Speech and upcoming Budget so that our province can begin to include in their vision, the development of policies, legislative constructs, programs and funding necessary to encourage and facilitate bicycling as a mainstream mode of transportation and recreation.  It is our hope that stakeholders across the province will see the Green Paper as a useful contribution to furthering cycling in Ontario," McMahon added.

The Share the Road Cycling Coalition is a provincial cycling advocacy organization created to unite cycling organizations from across Ontario and work with and on behalf of municipalities to enhance their ability to make their communities more bicycle- friendly. The organization's mandate is province-wide with a specific focus on the development of provincial policies and initiatives to encourage and enhance cycling in Ontario. The Coalition was created in memory of OPP Sergeant Greg Stobbart killed in a cycling collision in June 2006 and the husband of the organization's Founder and CEO.