The Canadian Track Cycling Team is fine tuning their training regime and equipment as they prepare to travel to Copenhagen for the World Championships March 24-28, 2010.  This season has seen the introduction of several new support staff, including sleep specialists, sport psychologists, nutritional guidance and, most recently, an aerodynamics consultant and high performance clothing specialist.

Canadian Cycling Association (CCA) Clothing Sponsor Louis Garneau has welcomed a team of consultants into the program to analyze their cycling clothing and make recommendations on improvements for better performance.  In track cycling, where the difference between a top-10 finish and winning a medal can be decided by fractions of a second, the fabric, fit, and seams that make up a high performance skinsuit can help bridge the time gap and boost an athlete up the rankings. 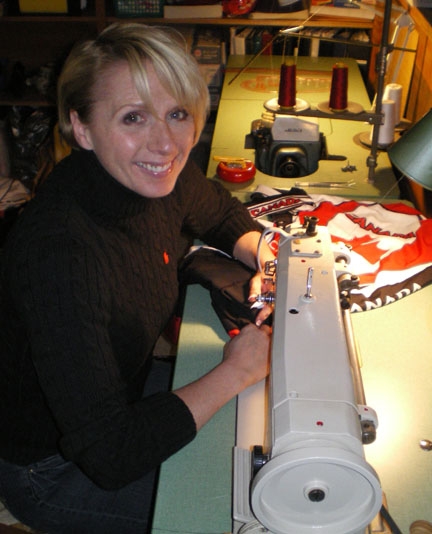 “As the clothing sponsor for the CCA, we are excited to develop our product and help the athletes reach their optimal potential”, states Pierre Perron, Marketing Director for Louis Garneau.  “The track program has won several medals in World Cups this year and we are proud to support a new initiative that we believe will help them improve on past performances and provide an edge over the competition.”

Deanna Panting with quixskinz.com, a former national team Bobsled and Skeleton racer, has made the transition from elite athlete to Race Suit Designer, specializing in performance clothing.  During the Vancouver Olympics she saw several athletes wearing clothing designed by a team that included her standing on top of the podium and taking home medals.  As a former athlete in a sport where results are determined by thousands of a second, she has an intuitive appreciation for the importance of the details that go into performance.  Her collaboration with other team members has led to an evidence-based approach to choosing fabrics, placement of seams, and proper fit to allow the full range of motion needed by the athlete to excel while optimizing the aerodynamics of the garment.

Panting recently traveled to Los Angeles where most of the track athletes have set up their winter residence to best train for the World Championships.  After watching some training sessions and making adjustments to the current national team skinsuits, she met with each athlete individually to custom fit their suit to their bodies and performance needs.  The athletes were all keen to work with Deanna, and Travis Smith, who will compete in the Sprint, Keirin, and Team Sprint events at Worlds, was impressed with “how open she was to some of the questions and ideas that I had. I feel like we are going to be at the start-line with one of the best fitting suits at this years Worlds and in races to come I have no doubt that Deanna working with the CCA is a really good thing.”

The track athletes will be wearing the first prototypes at this year's World Championships, and everyone involved is excited to see what changes and improvements will come as more testing is done heading in to the next World Cup season.

Television coverage of the 2010 Track World Championships will be shown on CBC during a two hour special event on April 10th.