'Hell of the North'  2010 - Brought to you by LaBicisquadra/RealDealRacing

Our own 'Hell of the North' will be held at 9am Sunday, April 11, 2010.
Starting / ending at Cedar Beach Resort, on the shores of Musselmans Lake.

The epic 90km course will test your early season fitness. The route will include rail trails, dirt roads and some of the area's nicest climbs.

Entry fee is $50 before April 8th and $60 afterwards and day of. Entry fee includes coffee and muffins in the morning before the race and a fully catered lunch afterwards. 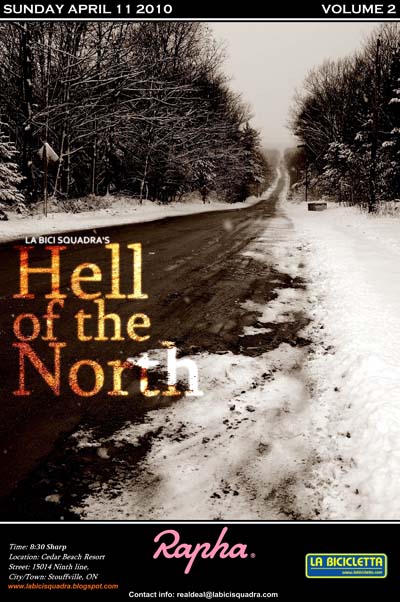 
History: Although this is the second year La Bici Squadra is organizing the Hell of the North, it is not the second time it has taken place. Started in 1988 by the likes of Mike Barry (his blog can be found here) and Sam Watson (who are both helping us recreate this wonderfully horrible event), it was originally called Toronto's Paris-Robauix Challenge and ran from the Toronto Zoo and finished at the Irish house in Sutton. It was approximately 70km and covered paved and dirt roads, some small tracks but the hardest battles were usually saved for the infamous trench. Mr. Barry ran the event from 1988- 2002 and the race has had a great palmares of distinguished victors and exciting races. After 2002 several versions of Toronto's Paris-Robauix challenge were held, notably by Cervelo and the Midweek Cycling Club. There was even a spin-off called "Hell and Back", held in December racing to Lake Simcoe and back, sometimes in snow storms, taking riders 5-8 hours to complete.

Present Day: A lot has changed since the inception of Toronto's Paris Roubaix challenge. The first and most important is to stress this is not a race, it is a tour. The roads are open and all riders must and need to obey all traffic laws. As well you do not need to have a racing licence to do this event. It is sanctioned by the OCA. The start and finish are now in the same place at Cedar Beach Pavilion in Musselmans lake. The course is very challenging and the optimal bike is probably a cross bike, a lot of people will probably use a road bike and even though there are off road sections nothing that you would need a mountain bike for. The length is approx 80km and features the TRENCH and many sharp steep small hills. The start of the ride is 8:30am and the field limit is 200 people. When you finish there will be a small lunch with soup and chili coffee and tea.

Bonuses: Rapha is sponsoring this event and will be sending people from their organization to participate. So it is a great chance to meet some of the people behind the scenes as well we will be giving out some Rapha clothing as prizes

We really hope you can make it out and enjoy our version of the HELL OF THE NORTH!!