Kevin Shaw won the Montney Roubaix race on Sunday, in an exciting sprint with Pat Ferris. Kevin won by inches in a fast downhill sprint after a 30 kilometre effort in -14 degree temperatures. Their time was 1:08:37 hours. Gary Hilderman was third at 1:12:01. Larry Joice won the one lap event with a time of 30:01 and Adam Currie second at 31:05. 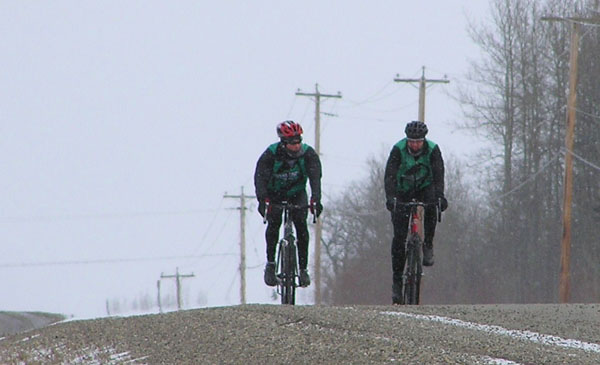 The Montney Roubaix is the second in the three race series. The circuit featured a 2.5 kilometre gravel hill, snow and ice for each 10 kilometre lap. There is a tie between Gary Hilderman and Kevin Shaw with 8 points each. Trevor McDonnell and Pat Ferris are tied for second with 4 points each.

The series winner will be decided at next week’s Two Rivers Roubaix. This 27 kilometre circuit will be snowy and muddy demanding a fast and handy bike rider. The winner gets the ‘Roubaix Cup’. Race time next Sunday is 2:00 pm from the Baldonnel School. For more information: www.ferrisfastcycles.com.