The London cycling community and the Forest City Velodrome (FCV) celebrated the life of Mary Kelly on Saturday night with a memorial race in her honour.  Mary, a very hard working volunteer at the FCV, was tragically killed in a auto - pedestrian accident in January.

The Velodrome wanted to do something special and we came up with a women's race that would feature the cycling talents of women track cyclists.

As the riders were registering for the evenings racing there was a sense of excitement in the air.  The youngest riders were warming up on the apron, while the more experienced riders formed a pace line that constantly increased their speed.  The music in the background seemed to bring a "rush" to the riders as they peeled off to finish their warm-up.

15 elite women would contest to 100 lap main event.  The riders were introduced to the crowd one by one and each rider took their position on the rail to begin the event.  To make things even more interesting, between the purse and preems there was over $900 on offer for the Mary Kelly 100.  It seemed all the women were up for the challenge and the pace of the race was high from the opening whistle. 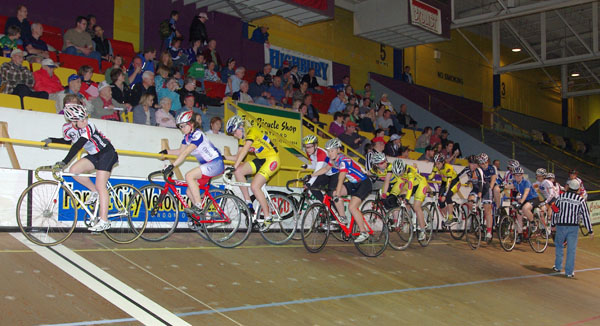 In the opening 20 laps the race was driven by 5 riders, Sarah Coney (Stevens), Krista Ruby (La Bicicletta), Amy Biskaborn (Village Cycle), Kimberley Edwards (Boston Mass.) and Stephanie Bester (coachchris.ca).  The laps were ticking past very rapidly and the field was strung out with riders trying to gain a lap and pocket the bonus preem of $50.00 for lapping the other riders.... no one could get away.

At the mid-way point of the race the first preem was announced and the women took no prisoners, speeds continued to exceed 40 kph and the riders were on the rivet.  The first preem went to Ruby, Coney and Bester.  The pace slowed and the field was able to re-group, within the next 15 laps another cash preem was announced and that had the women scrabbling to get in position for the push to the line.  Stephanie Bester lead the sprint out with 2 laps to go and held the front of the pack that was being reduced in size on each circuit around the 138m Velodrome.  Down the back stretch Bester seemed to have the cash in her pocket when Ruby made a surge and just pipped Bester to the line.  Good thing the prizes went 2 deep for Bester.... or it could have been a big effort with no reward for the first year senior.

With 20 laps to go the pack was down to 6 riders on the lead lap and the remainder of the entries were watching the final laps from the infield.  The Gambler preem was put up with 7 laps to go (1 Kilo).  50 bucks to the leader the announcer screamed, Amy Biskaborn who was on the front of the race.  Biskaborn attacked to open a small gap, however, it was not enough and the ever present Ruby pounced on the opportunity and again won the cash, that gave Krista $100.00 in winnings and we still had 7 laps to go.  The pace continued with the women watch each other, with 4 to go from no where Edwards from Boston Mass, charged over the top of the pack to take command of the race and won by 15m (1 second) over Krista Ruby, Stephanie Bester, Sarah Coney, Amy Biskaborn and Emily Mckenzie-Picot.

The crowd gave the women a huge ovation for their efforts.  The Trophy presentation was held immediately after the race.  Brian Kelly awarded all of the prizes, medals and trophies, what a great night of racing. 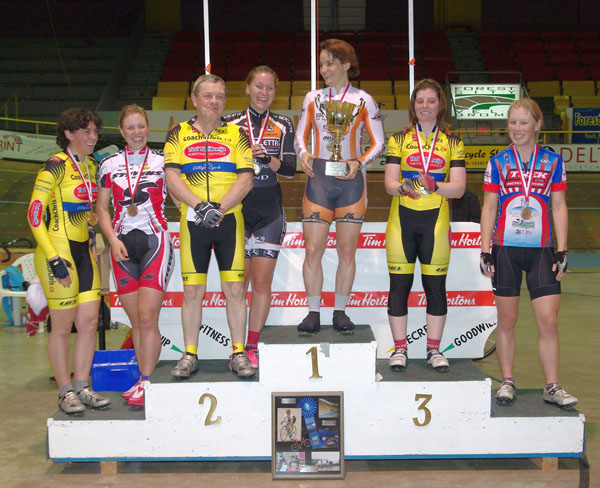 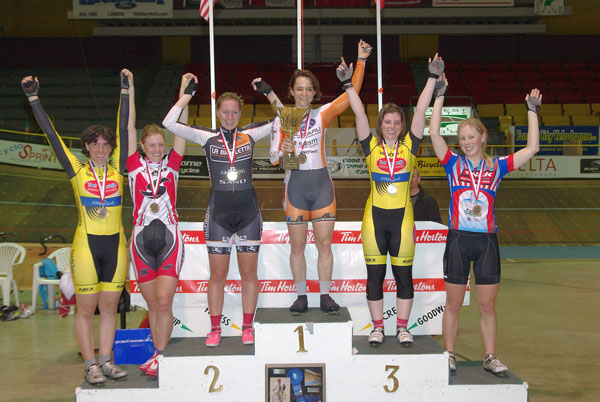