On Wednesday, April 7th, the U23 team conducted a reconnaissance of the Tour of Flanders course. The UCI event part of the U23 Nations Cup calendar and will be held on Saturday, April 10th. The U23 athletes, Keir Plaice, Antoine Duchesne, Owen Harrison, Jamie Riggs, Michael Joanisse and Spencer Smitheman had the chance to pre-ride the course with Dominique Rollin, who just finished his first (professiona)l Tour of Flanders last Sunday (42nd place at 5:13) . The Cervélo team rider provided valuable information for the U23 riders, who will face the difficult roads of Flanders and especially the 17 climbs (some with cobbles) in a peloton with many of the top U23 men in the World. The pre-ride helped our young Canadians to tame a little of the legendary and mythical climbs that include the Valkenberg, the Muur and especially the terrifying Molenberg. 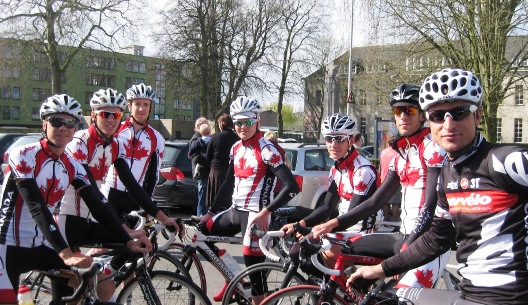 The riders enjoyed their experience and are very grateful to Dominique.

After the Tour of Flanders on Saturday, the team will take (a well deserved) rest at the base camp while watching (on TV) Canadians (Dominique Rollin and Michael Barry) race the Paris-Roubaix classic on Sunday. The U23 team will then head to Picardie, France next Tuesday to take part in the Cote Picarde, another round of the UCI U23 Nations Cup to be held next Wednesday April 14th. A brief return to the base and then on to another round of the Nations Cup for the ZLM tour in Holland on April 17th.

It is a big program for our Canadians. However, the athletes are ready. They have been in Belgium for a week and have already participated in two Kermesses (National Belgian events). Keir Place, who has been in Holland for a month took 9th place in the first race. Michael Joanisse spent the race in the break away, finishing 12th. Owen Harrison who has been in Bretagne, France for over a month (with the club Hennebont) joined the team Tuesday night after having finished 6th overall in the GC of the Méne en France (French U23 National event). It is a motivated team that is ready to face the World’s best espoir riders.