Daniele Defranceschi, Mark MacDonald, Jean-Michel Lachance, and Remi Pelltier-Roy took almost a second off the Canadian Record in the Men’s Team Pursuit at the Pan American Championships in Aguascalientes, Mexico. The team was looking to make it in to the final but had to settle for 5th and the knowledge that they gained time on all their competitors from last year. 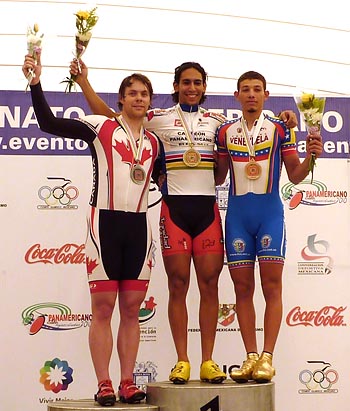 Personal bests were the theme of the day for the Canadian Team and Monique Sullivan set another one in the 200 meter sprint qualifier. Her previous personal best was set at Junior Worlds in Aguascalientes in 2007 and today’s 4th fastest time of 11.307 gave her confidence heading in to the sprint rounds. She easily dispatched her Mexican pairing in the 1/8 round and won the first two races in the quarter finals moving on to the semi-final round tomorrow.

Steph Roorda and Laura Brown raced in the Scratch Race and were outnumbered by the South Americans finishing in 9th and 10th place respectively. “My goal for the scratch race was to race hard, but smart. I was aggressive in the race, I spent 10 laps or so off the front. I was caught inside half distance to go, and then set myself up for the finish. I made a move with a few laps to go, but it didn’t go as I hoped. I was wanting a better result from this race, but feel I had a solid ride” commented Steph Roorda.

Travis Smith and Stephane Cossette rode in the kilo final and both raced to personal bests and moved up one spot from last year. Stephane finished in 6th place and 1.18 seconds faster than last year in a time of 1:02.671 and Travis bested his Canadian Record to win Silver in a time of 1:01.429. Travis and Stephane will race again Friday in the Sprints and are feeling confident heading in to the race.