After a three week break, the UCI Mountain Bike World Cup returns to center stage this weekend with round three in Offenburg, Germany.  The first two rounds saw new winners in every race, and changes in the series leads for both men and women at each event.  Offenburg is also the first 2012 qualifying event under the revised time line mandated by the IOC, so there is an added incentive to do well. 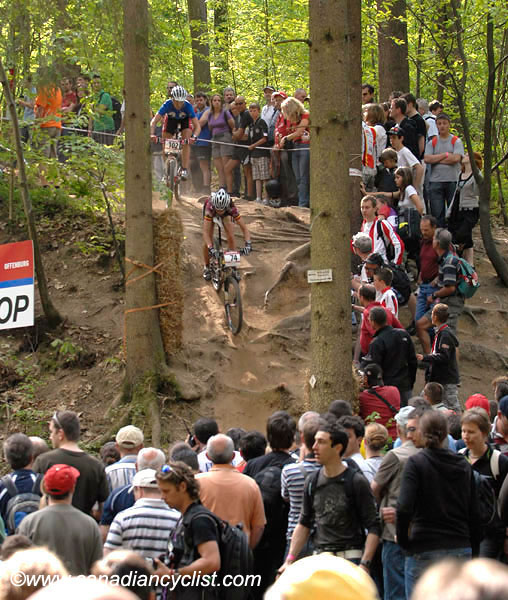 Offenburg is one of the newer hosts on the World Cup circuit, but it has already been selected by the riders and media as the top cross-country event of the year in each of the past two seasons.

The spectator friendly 5.1 kilometre circuit offers a mix of both technical sections and longer climbs requiring strength and endurance.  It takes a complete rider to do well in Offenburg.  Riders have faced both mud and dry conditions here, but the forecast is for good weather, so it should be a fast race.

In the women's competition, Willow Koerber (Subaru-Gary Fisher) became the first American to don the leader's jersey in nearly a decade after back-to-back second places in Dalby Forest and Houffalize.  She is still looking for her first World Cup win - could Offenburg be the location?

Koerber will face tough competition from world champion and round one winner Irina Kalentieva (Topeak Ergon), and round two winner Eva Lechner (Colnago Arreghini Suditrol).  Others who are likely to be in the battle for a podium spot are Luna teammates Catharine Pendrel and Katerina Nash, plus Marga Fullana (Massi) and 2009 World Cup champion Elisabeth Osl (Central Pro).  Returning to World Cup competition for the first time this year will be 2008 Olympic champion Sabine Spitz (Central Pro), who is coming back from surgery for a groin injury.

Pendrel became the first Canadian to make the elite World Cup podium this season, at Houffalize, and is looking to continue her streak.  Marie-Helene Premont (Maxxis-Rocky Mountain) struggled with mechanical problems in Houffalize, so will have to work hard to make up a poorer start position.  In the U23 category, Emily Batty (Trek World Racing) won in Offenburg last year, and last weekend finished third in a Germany national series race, beating Kalentieva. 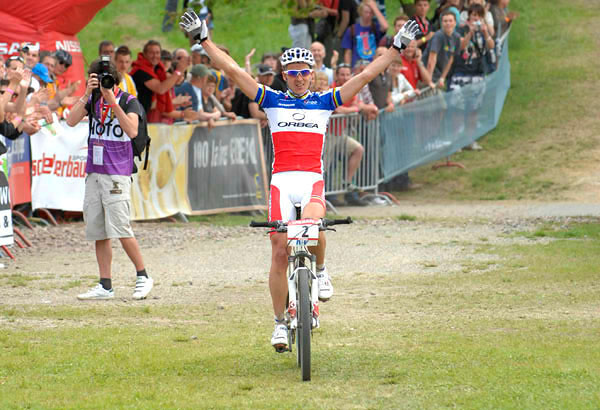 Absalon has an unbeatable record in Offenburg

In the men's race, Jose Hermida (Multivan Merida) holds the series lead, but defending World Cup champion Julien Absalon (Orbea) is still searching for his first World Cup win of the season, and will be a strong contender.  Absalon has an unbeatable record in Offenburg, with three consecutive victories.  Round one winner and world champion Nino Schurter (Scott Swisspower) will also be looking to get back into contention after a poor race in Houffalize, as well Under-23 world champion Burry Stander (Specialized) and German favourites Manuel Fumic (Cannondale Factory) and Wolfram Kurschat (Topeak Ergon).

Geoff Kabush (Maxxis-Rocky Mountain) seems to be coming around from sickness that slowed him down in Houffalize, after finishing second to Sven Nys in a local race two weekends ago in Belgium. 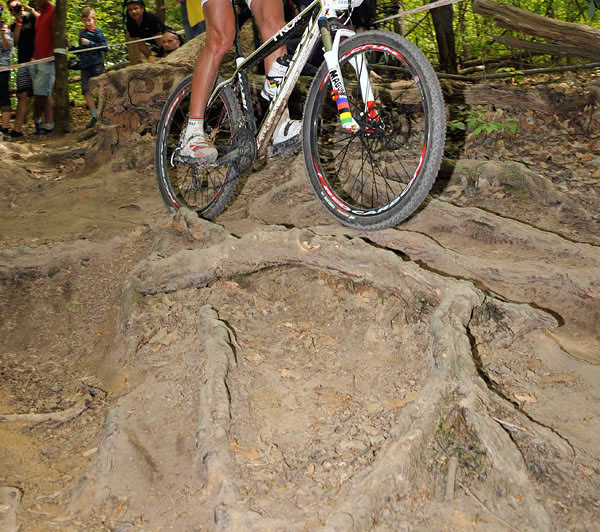 - Lene Byberg (Specialized) is the only top-10 rider missing from either the men or women.  She is battling a virus.

- Rained here earlier in the week, and the course yesterday was very muddy and slippery.  However, hot and sunny today (and expected tomorrow), and it is drying out rapidly.