Fort William, Scotland has become one of the all-time favourite venues for the Gravity Racers, winning the best World Cup award five times in eight years.  For 2010, the Scottish Highlands play host to round two of the UCI Mountain Bike World Cup presented by Shimano for Downhill, and round three for 4-Cross. 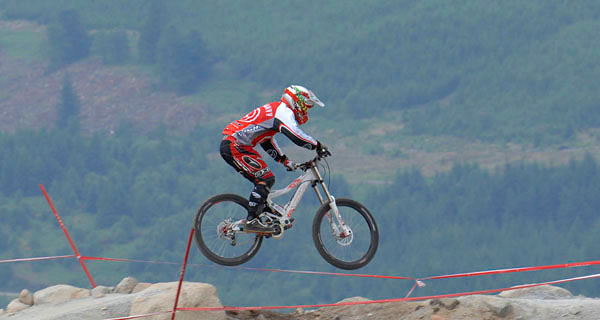 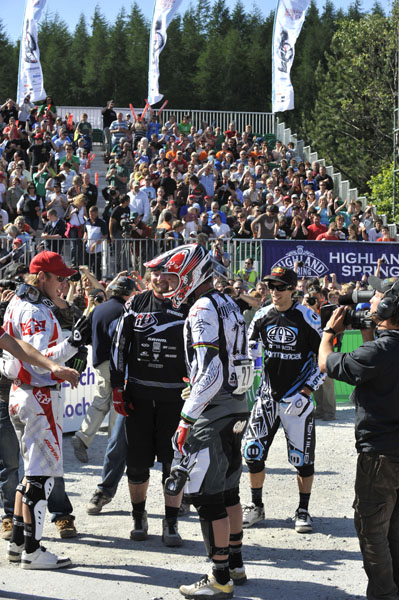 The 2.82 kilometre Downhill course takes riders down Aonach Mor, the ninth highest peak in the United Kingdom, dropping 555 metres.  The fast top section of the course is framed by stunning views of Ben Nevis, the sea lochs of Loch Linnhe and Loch Eil, and the islands of the Inner Hebrides.  However, riders have little time to admire the view, as they navigation rock gardens and dropoffs.  For the lower half, riders twist and turn their way through wooded single track, drops and pedalling sections, before dropping into the finish bowl and the always enormous crowd of spectators.

The course has undergone significant upgrades in the upper portion.  Under the direction of UCI course designer Chris Ball, the upper section has been dug out extensively in places - all the way down to the bedrock in some instances.  This has changed the overall look of the course from man-made to more natural.  The entrance and exit to the wooded section have also been revised, returning them to the original 2002 course.  Rider feedback is very appreciative of the changes, and they should make the upper part of the course more technical; a change from the former high-speed freeway it was.  However, it will still favour bigger, more powerful riders, and top times are likely to be over four and a half minutes.

Greg Minnaar (Santa Cruz) leads the men's standings after round one, but his team mate Steve Peat, the reigning world champion, always performs well here in front of a home crowd.  Others who have a good history here include Sam Hill (Monster Energy-Mad Catz-Specialized) and Gee Atherton (Commencal).

Sabrina Jonnier (Maxxis-Rocky Mountain) is the defending champion at Fort William, but she will have a tough battle against round one winner Rachel Atherton (Commencal), who counts Fort William as one of her favourite tracks.  Others to watch for include previous winner Tracy Moseley (Trek World Racing) and Floriane Pugin (Scott 11). 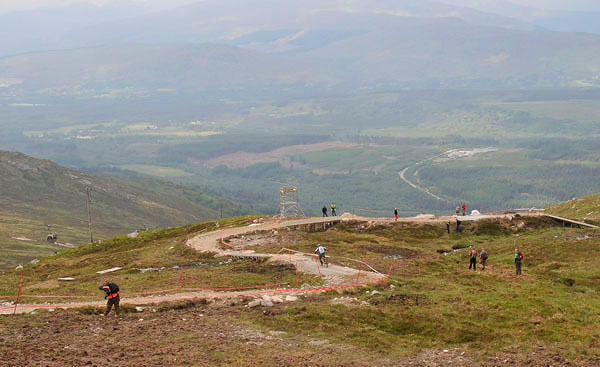 Last year, the 4-Cross course add a new rock garden through the middle section of the course, adding to the difficulty of this fan favourite event.  The 4-Cross series has seen different winners in each of the first two events, so the competition is quite open.  Jared Graves (Yeti Fox Shox) is the defending champion at Fort William, and leads the World Cup, and is a clear favourite for the men.  His closest rivals are likely to be RSP 4 Cross team mates Joost Wichman and Tomas Slavik, plus British favourite Dan Atherton (Commencal).

For the women, defending champion Jill Kintner of the United States has retired, and world champion Caroline Buchanan of Australia is focussing on the BMX World Cup, so this leaves the field open to other riders.  Defending World Cup champion Anneke Beerten (Suspension Centre) has not yet managed to win this season, so she will be very hungry.  Czech star Jana Horakova, winner of round one and the current World Cup leader, will be looking to hold onto her leader's jersey, while Austrian Anita Molcik, second in the standings hopes to bump Horakova from the top spot.  Another to watch will be round two winner Fionn Griffiths (Norco World Team), who is coming back strongly from pre-season injury.

In 4-Cross qualifying, Beerten, Horakova and Molcik finished in that order, while Graves was nearly a second ahead of Joostman for the men, with Romain Saladini (Team Sunn Mont Genevre) was third.  Dutch rider Roger Rinderknecht was initially disqualified for missing a gate, before being reinstated after a video replay and put into fourth place.