Cervélo TestTeam's Dominique Rollin was in the day's major break, a 191 kilometre race from Evian-les-Bains to Saint-Laurent-du-Pont. Rollin was setting the pace along with four other riders, all Frenchmen: Biel Kadri (Ag2r), Cyril Gautier (Bbox), Sebastien Minard (Cofidis) and Matthieu Ladagnous (Francaise des Jeux). At the max, they had a lead of over nine minutes before they were pulled back at the bottom of the last climb. Grega Bole (Lampre-Farnese Vini) won the chaotic sprint with Peter Velits (Team HTC – Columbia) in second and Geraint Thomas (Sky Professional Cycling Team) in third. 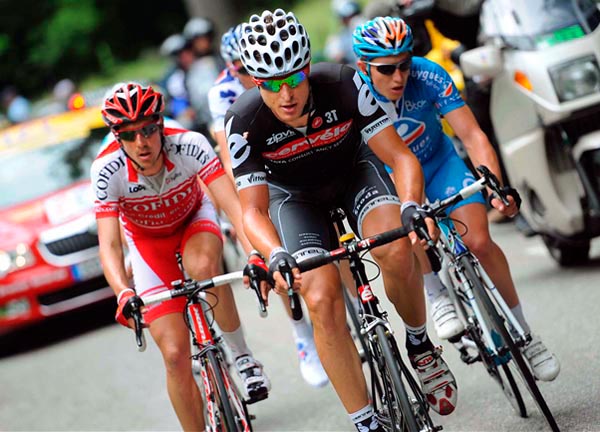 Dominique Rollin in the break

"We had a big ride from Dominique Rollin today in the breakaway bunch along with four other riders, all French," said Philippe Mauduit, Sports Director. "They finally get caught at the bottom of the last hill and then we had only two guys in the first bunch, Stefan Denifl and Oscar Pujol, though Dominique and Davide Appollonio were pretty close at the top of the hill. But then with 15 metres to go there was a big crash in the peloton involving 40 riders. We had Martin Reimer and Gabriel Rasch in that but no big damage for them. Unfortunately, it was not possible for them to come back before the hill because the pace was fast and hard. Anyway, it was a positive stage, a good stage. Stefan in the final sprint was about 200 metres to the line but could not make a move, blocked by another rider. Tomorrow's stage is 177 kilometres and more or less similar to today's stage. We hope to fight again, like the boys did in today's race and if they do the same tomorrow, we will be in good shape."