There is high cloud with some sun poking through on occasion.  The forecast is for rain later in the day.  Temperature is 18C

Update on Matt Bell:  National team coach Vincent Jourdain said Matt has 28 stitches on his face - just under his eye-  from his sunglasses.  His teammates are calling it the 'Lance Armstrong' injury.  His knees are also badly bruised.  His concussion is bad, but tests show nothing more and he actually slept well last night.

The accident happened on an unexpected loose gravel section.  Matt was near the front,  following the BMC team who were chasing the break with Routley, Serrano Fernandez and Thomson.  The BMC train swerved to miss a pothole, the last rider (Kristoff) did not and hit the pothole going down and Bell crashed into him and went over the bars.

Javier Megias Leal (Team Type 1) who was listed as DNF was allowed to start when his team  proved that he had been directed off course.  His time was adjusted to that of the winner +15%

It is not as windy today

Attacks started at 1 km in

Lots of attacks going off, but nothing is sticking.  The peloton is just one long line

There seems to be a lot of mechanical problems. Nic Hamilton (Team Canada) just took assistance and the team cars seem busier than usual servicing the riders bikes on the fly.

Keir Plaice (Team Canada) just had a front flat, but was quickly back on to the peloton

68 km in and the CKT Champion System Team has done to the front and the gap to the break has been brought down to 2 min ....... and dropping

Keir Plaice (Canadian National Team)  crashed at 94 kms and was way off the back, then with a little "help" is back at the back of the peloton by 99 km (feedzone)

WOW.  Riders hitting 100 kmph on some of the descents

At 121 km.  The riders in the break are starting to look and "ride" tired

20 km to go.  The gap has not changed.. but there are a couple of short lap/circuits before the finish at Thetford-Mines, so a large group will have the advantage

The break has been caught.  Andrew Randell (Spidertech p/b Planet Energy) is at the front powering the bunch, working to set up their sprinter Boily

Starting final lap. Michael Joannisse (Team Canada) is off the front with a 5 sec gap.  DCM at the front of the bunch chasing hard 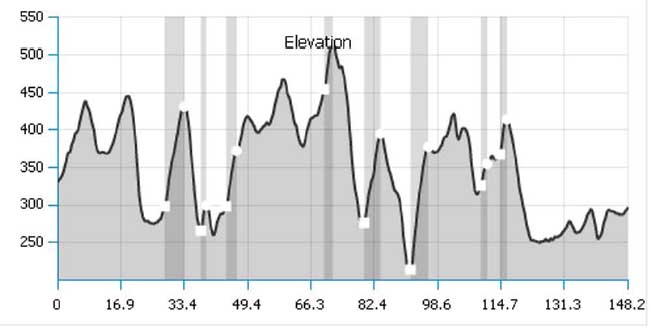